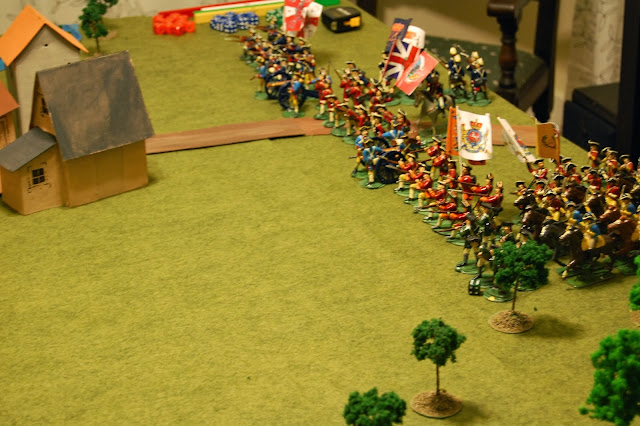 The goal in setting up this Seven Years War game in 54mm scale (again using the All the Kings Men ruleset) was to minimize or better control the effect of terrain on the gameplay.  The previous playtests had used an I-go-you-go system of randomized terrain placement (I place a hill, you place a river, I place a forest, you place a house, etc) that resulted in cluttered playing fields and games which relied heavily on artillery duels.  The result was that G___ and I decided to agree on terrain placement ahead of time.  I web-researched some historical battles and presented him with two options in the form of hand-drawn maps: Hastenbeck in 1757 and Lutterberg in 1758.  He chose Hastenbeck. 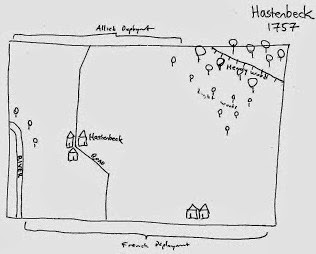 The map for Hastenbeck was simply rendered by me as allowing for the French to deploy along one full side of the table, while the Allies deployed in a more constricted, off-center stretch of the opposite side (however the Allied left was guarded by heavy woods).  As a bonus, we each took a copy of the map and drew out our initial placements.  I was Allies again, and tried to deploy mainly in a nice defensive line with the rest of the force piled up in column ready to advance on the left next to the woods. 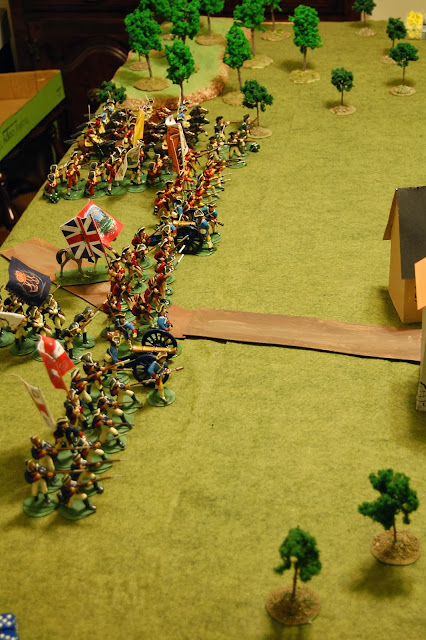 This was the first "large" game, 10 units total on each side, and the first to feature skirmisher units.  Needless to say, the prearranged map and the total blind deployment resulted in period-appropriate long and dense battlelines at start the game (as hoped for). 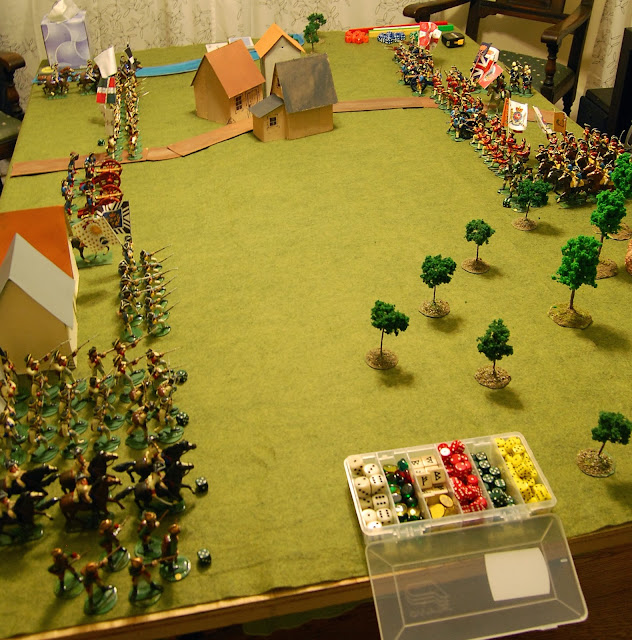 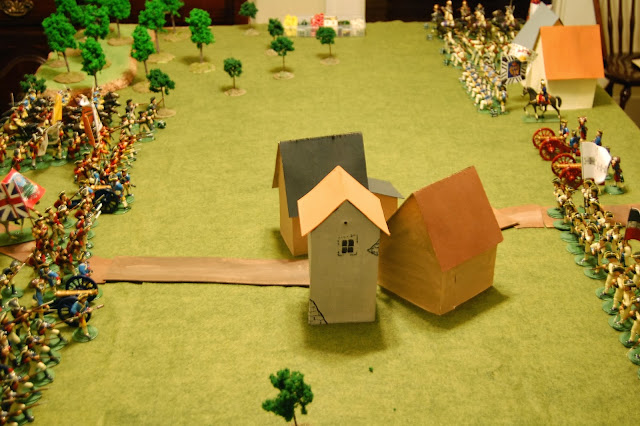 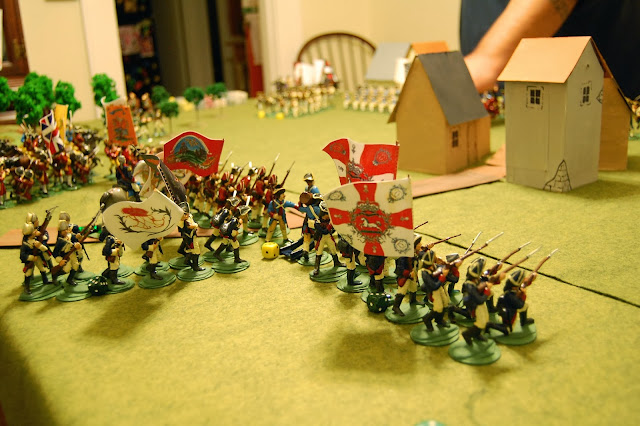 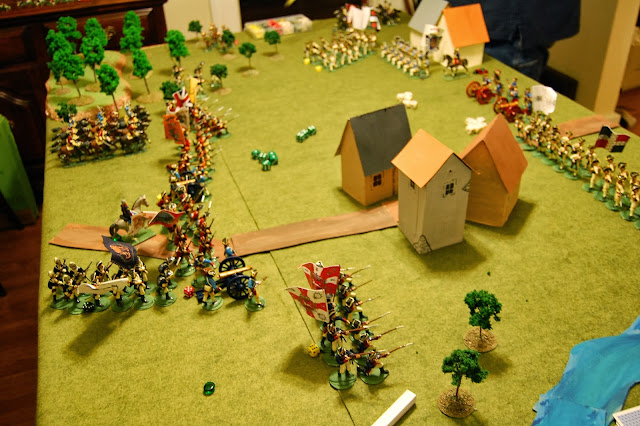 After the first few moves, the Allied right's artillery had succeeded in driving the French Mestre de camp Général Cavalerie from the field with some incredible good dice throws. Meanwhile the French began advancing along the edge of the scrubby light woods (no movement detriment but capable of obstructing line of sight for fire attachs) which protected the Allies' left flank. 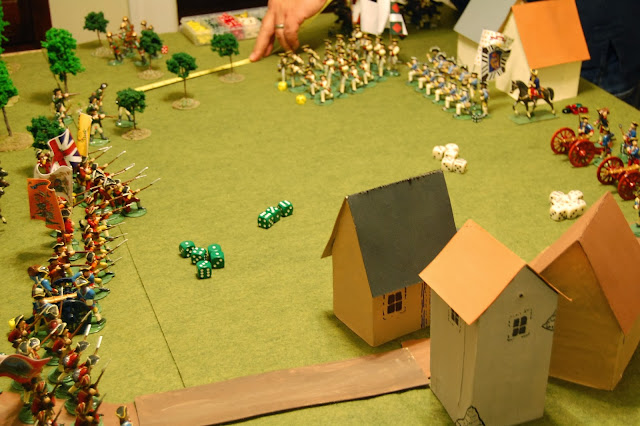 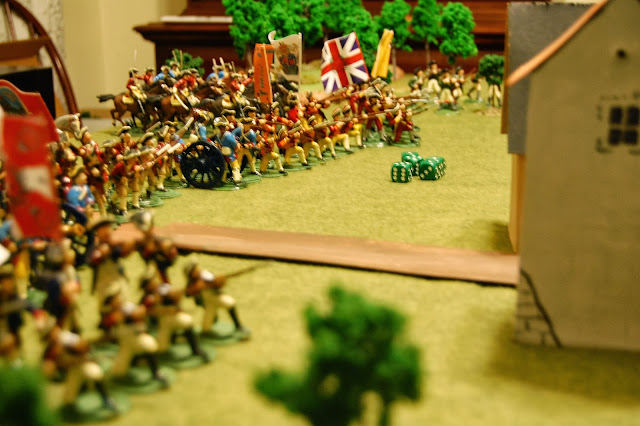 Skirmisher firefights and cavalry charges and counter-charges then ensued in the light woods on the Allied left.  The end results were that dismounted French Schomberg dragoons (light troops) held the woods, but the remaining French cavalry had been driven from the field, as had the Allied jaegers (light troops) and Hessian mounted dragoons.  The British 12th Foot regiment was taking fire from the French Rouergue and Acquitaine regiments. 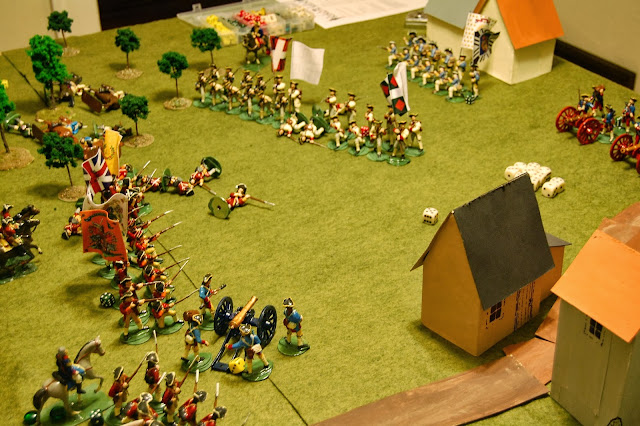 The British 12th breaks in the face of French musketry.  The Allies try to pivot their right over to compensate.  At a key moment Hanoverian foot artillery is manhandled into canister-shot range of the Acquitaine infantrie!  12 dice instead of 8 for the artillery attack! 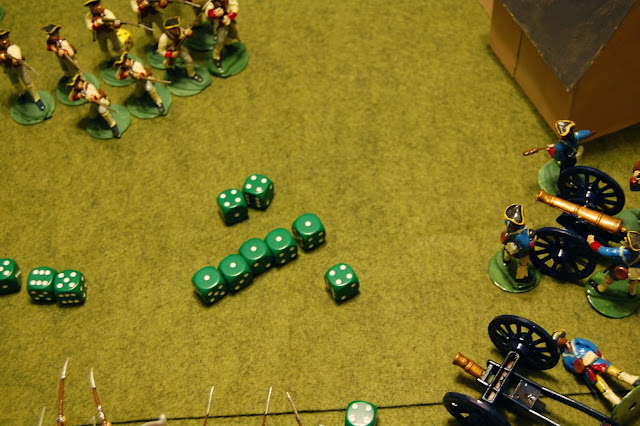 Bad dice strike!  The French weather the grapeshot like it was a summer breeze!  A follow-up volley from von Reden's Hanoverian infantry is likewise uneffective.  The intention of these volleys was to soften up Acquitaine for a devastating charge from the British dragoons still standing by in column by the woods. This charge never precipated... 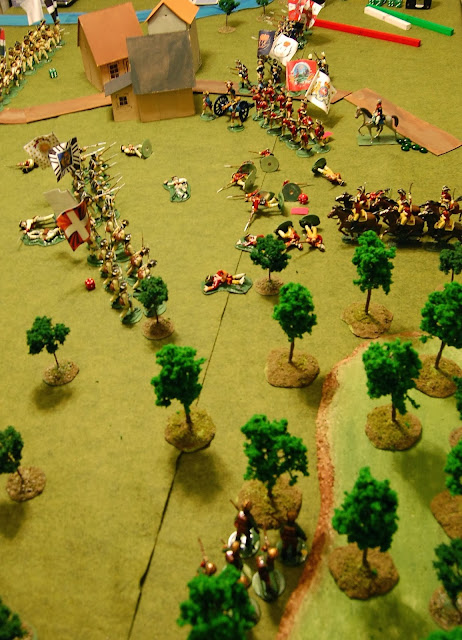 A Hanoverian artillery unit is destroyed by French musketry and von Hardenberg's Hanoverian regiment is also broken.  The Allies have lost half their starting units and so the retreat is sounded. 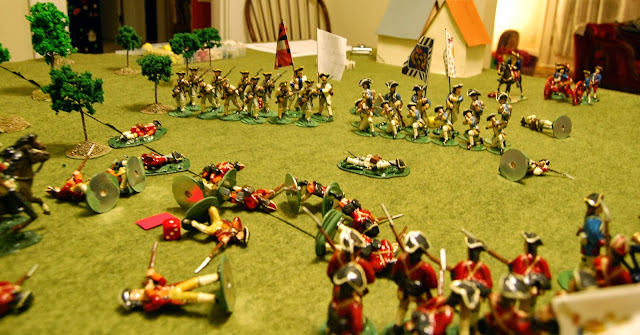 Bad dice aside, G___ gets credit for deciding on a overall plan of attach based on his initial deployment, and for sticking with it.  I get discredit for (as usual) letting more fragile units (artillery, skirmishers, and cavalry) take all the risks while letting the infantry linger too long. 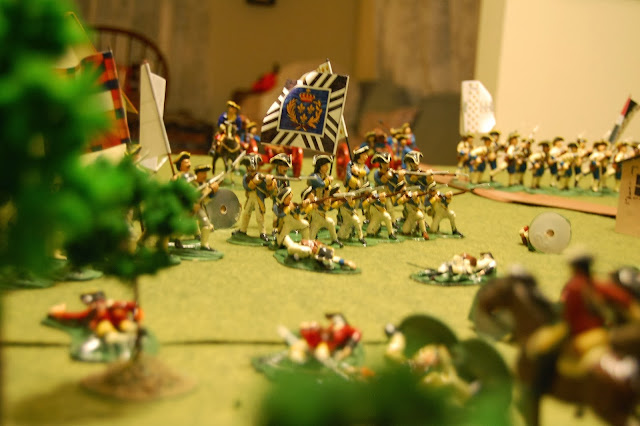 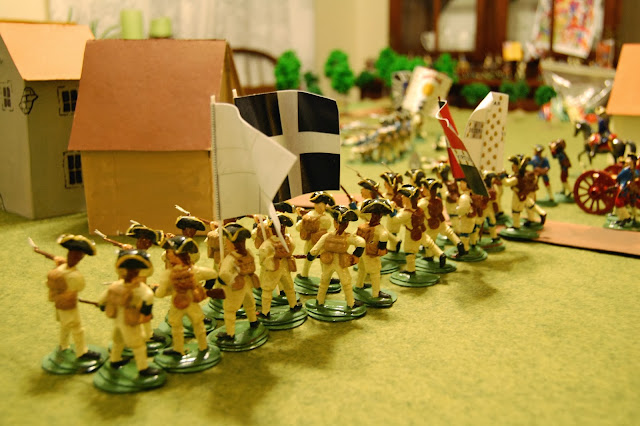 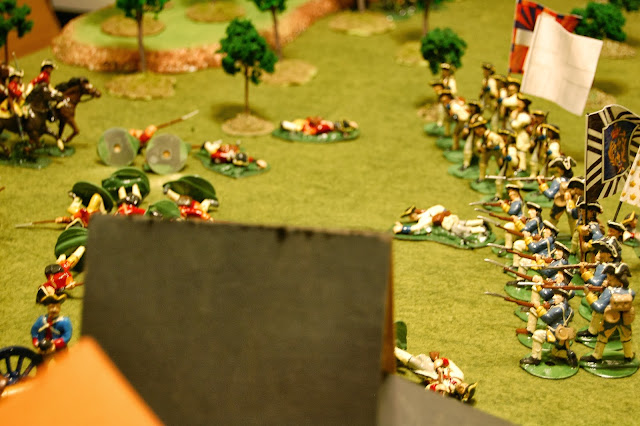 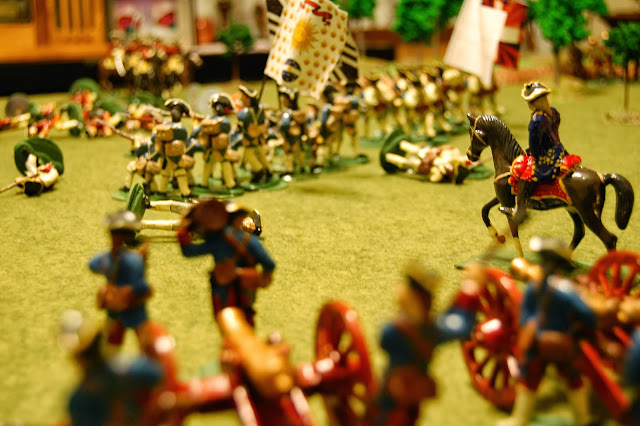 All in all an enjoyable evening, not the least because it looked and felt right historically, as well as being engaging.  The pre-agreed terrain was a boon and the largest fielded armies to date gave things an epic feel.  Artillery was nominal - the French barely fired a shot the whole game but won rather handily anyways. 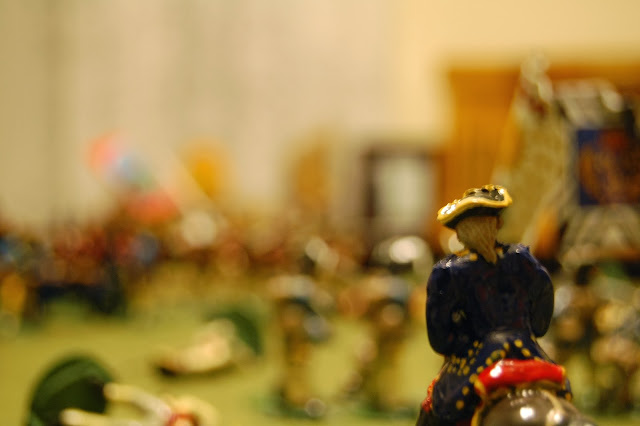 Posted by Portland Little Wars at 10:10 AM No comments: