Every once and awhile, a figure-painting project just really comes together.  I recently took advantage of a good sale at Armies in Plastic and in rather record setting time painted up a 54mm German Empire "army" of 36 infantry, 3 officers, a gun and 4 crew.  They are wearing the greenish version of "feldgrau" and pickelhaubs with tan covers which roughly corresponds to an early WW1 scheme. 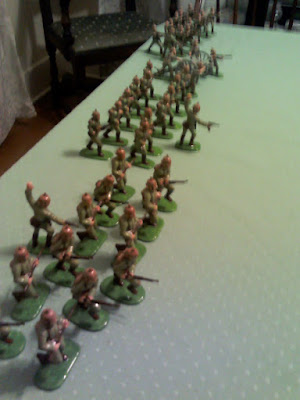 The infantry all use only five colors: flesh, the "feldgrau" green, dark brown, tan, and bright green for the bases.  The figures were soaked in batches in a mason jar of SimpleGreen, then in a jar of white vinegar, then primed with white gesso.  After they were block painted, I did a "magic wash" of 3 parts water + 3 parts matte medium + one part light brown.  This gave the figures a little shading, especially around the face and hands. I then sealed with the figures by brushing on clear gloss polyurethane. 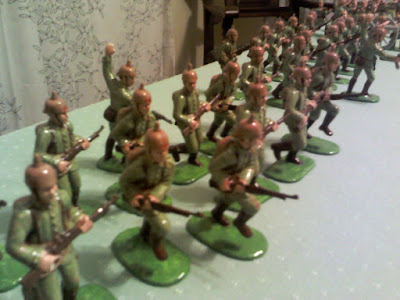 I am extremely satisfied with the end result.  The magic wash had darked the green of the unifoms a bit but the gloss coat lightened them back up again, I feel. 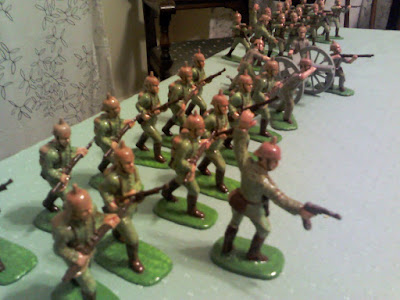 The gun crew were originally colonial British with pith helmets, but with the ol' exacto-knife, a few pins, and krazy glue I swapped the heads. 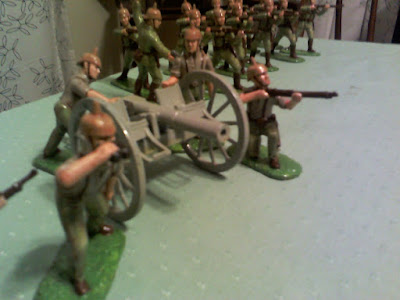 Since I had three boxes of infantry (60 figs) I was able to avoid using poses I wasn't very fond of (so no kneeling-shooting guys, and all the grenade throwing guys became head-swap donors for the artillery crew).   I also cut off all the bayonets since (a) they are the most bendy part of the figure and paint always chips/flakes there first, and (b) I think the figures look a little more "The Business" with out the bayonets than with.  Final count is 12 figs advancing at a walk, another 12 advancing at a run, and 12 standing/shooting. 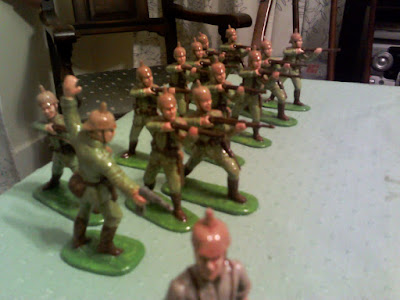 Next up is a mirror opposing force of British with pre-1910 uniforms and pith helmets (khaki uniforms - no red tunics).  Envision using the Charge! rules and/or All the King's Men for mechanics but with a healthy dose of Wells' Little Wars for set-up and scenario design.  Also trying to decide if I want to deal with hassle of adding cavalry or not...