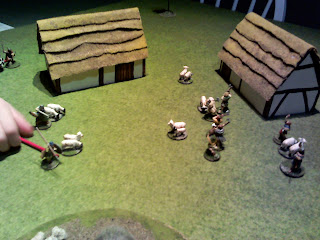 Played a game of Song of Arthur & Merlin the other night with Sebastian. This an Athurian skirmish game using Ganesha Games' Song of Blades & Heroes engine.  This consists of rolling one to three dice against a figure's "Quality" score (usally 3+).  Every success result gives you an action to spend (move, shoot, attack in melee, etc).  However, if you roll two failures, it is a turnover, and you turn ends immediately and your opponent may begin making activation rolls.  This flip-flopping turn structure is the heart of the game, as that if you roll only one dice to activate, you will not get a turnover, but will have less actions to spend.
We were playing the "Raid" scenario, where each side tries to obtain and get away with herds or treasure tokens.  I had acquired some plastic sheet and based them two-to-a-base, so we were stealin' sheep.  Each side had a 300 point roster consisting of five basic warriors, a champion, and a leader. I was playing axe-wielding  Irish, and Sebastian fielded Saxons.  All figures are by Old Glory. The sheep are by Ertl.
The game took about an hour and a half, which was probably uncommonly long due to explanations and some rule searching by me (mainly regarding the control of sheep). There were six herds of sheep, and the Saxons had obsconded with three and the Irish with two. Sebastian killed one of my Irish warriors, but my chieftain slew his warlord, which in turn triggered a warband-wide morale check which caused his champion and a warrior to flee the field. This left him with one warrior on the table (three Saxon warriors and two Irish had already left the table with thier stolen sheep). At this point I was still trying to get one sheep herd off the table. The lone Saxon made a dash and, for a second, did actually wrest control of the sheep to himself. But the Irish snagged them back and made good their getaway.

Each sheep marker is worth 3 VP. So 9 to 9. Figures are 1 VP for every 50 points they cost. The slain Irish warrior costs 32 points or thereabouts, so that nets 0 VP. The Saxon warlord was like 70 points, so that gives the Irish the narrow win with 10 to 9 VPs.
I think we'll try it again. Probably use a bridge scenario called "None Shall Pass" and up the warbands from 300 to 400-500 points (basically add 3-6 more warriors per side). Maybe try some world-building, too. Make a little cartoony map and show where the sheep raid took place. Then add where the bridge is and say that the bridge battle is one of side trying to cut off the escaping sheep raiders. The campaign system in the book has dice rolls to determine whether slain figures were really slain or just wounded and can recover and play in the next game, so we could do that too…
Posted by Portland Little Wars at 7:21 PM No comments: Links to this post