Good fortune has landed me several W. Britains diecast spring-loaded breech-loading toy soldier artillery pieces, including two of the 4.7" naval guns as described in Mr. Wells' Little Wars (or at least the 1960s W. Britains' re-release version of said gun, to be specific).  Mr. Wells called these toys a "priceless gift to boyhood" and noted them "capable of hitting a toy solder nine times out of ten at a distance of nine yards" (!). 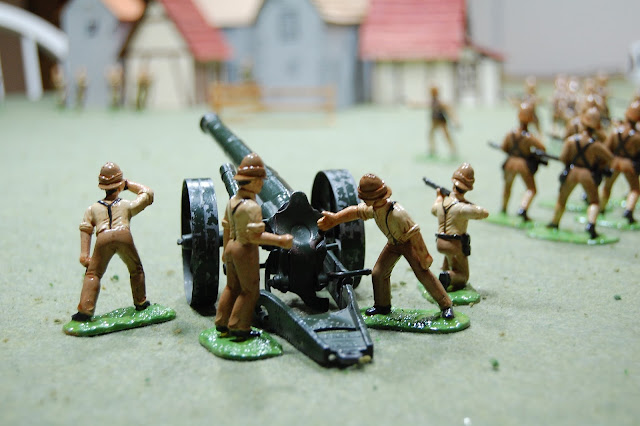 I must admit my existing gun crew look quite nicer with the four point seven than with their plastic seven pounder... I shall have to decide on whether to give this play-worn toy a coat of fresh paint or not.

Sadly, the addition of these pieces underlines the notable absence of appropriate cavalry for my British and German armies (1900-1910 period).  This can easily be cured with a purchase, but I cringe at the thought of painting cavalry (for no real reason).
Posted by Portland Little Wars at 6:49 AM No comments: Links to this post

Continuing to toy around with a Lion Rampant variant for the English Civil War now nicknamed 'Pikes Rampant'.  Two previous outings were enjoyed by all and I'm planning on offering this for 2-4 players at our next get-together.  Having never played a 4-player Lion Rampant game before we took it for a test spin first.  Each of us had two 'commands' of 18 points each, usually one of entirely foote units and other having all the Horse. 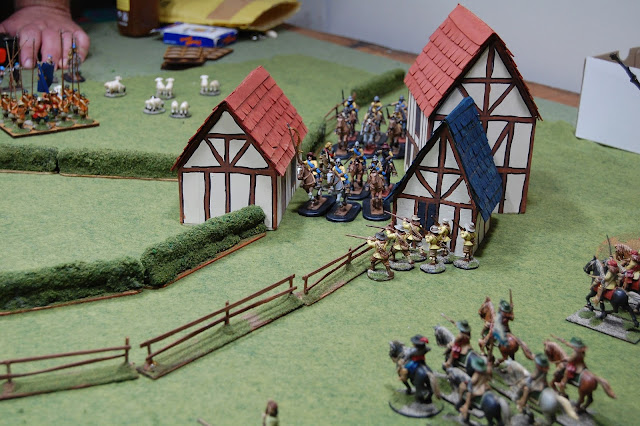 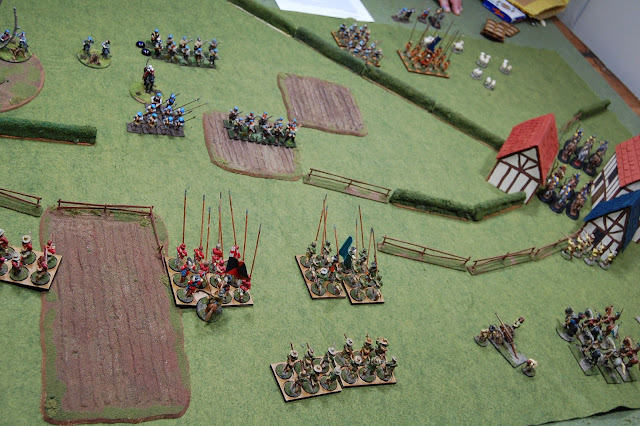 It really went rather well and we laughed a bit and things got rather frantic for a few rounds as basically every unit on the table almost seemed to converge quite close together all at once. 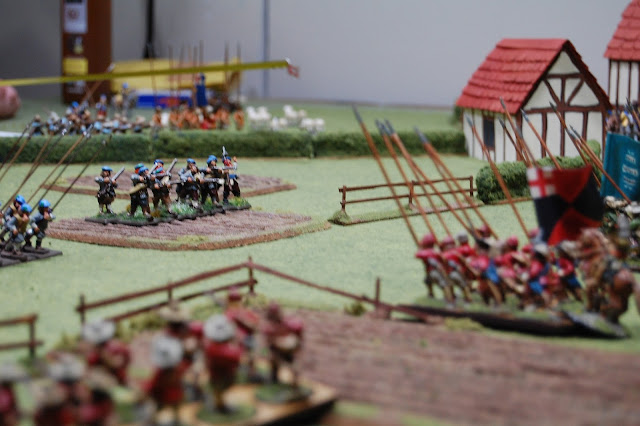 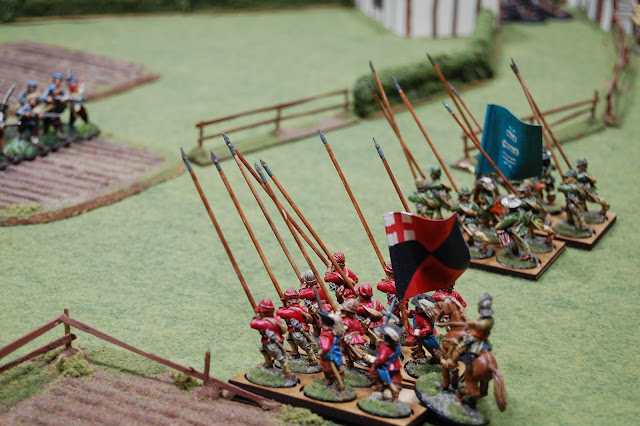 As usual the ending was a bit 'meh'.  We were using the vanilla 'Blood Bath' scenario but with
the "dice to determine if the next turn is the last" threshold kicked up from 4 to 8 units remaining.  The last turn rule roll was successful immediately and we totaled our eliminated unit points and the game was as dead tie.  We were lazy and did not issue boasts so there were no bonus points to break the tie. 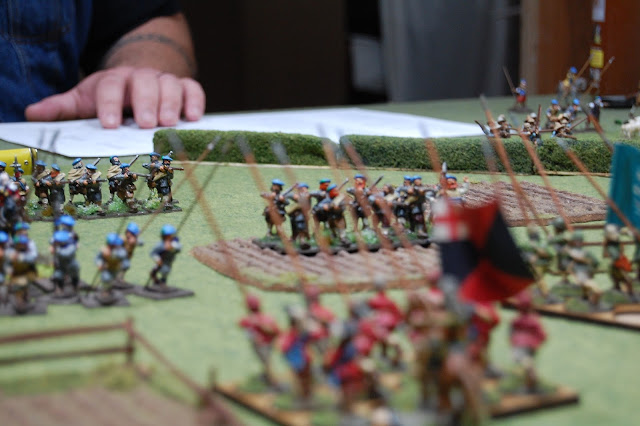 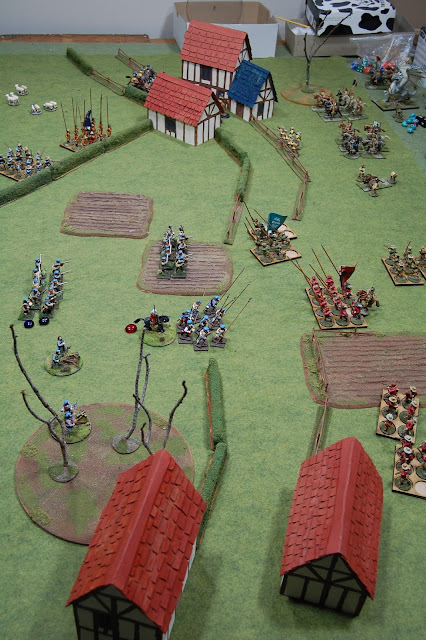 What I should have done was purchased a 3" x 24" strip of basswood, flocked it, and deemed that the "objective" to be held and used the 'Hold on Tight' scenario instead.  That one at least gives you the "who has won the field" type of conclusion rather than a mathematical "who has more toys on the table" one. 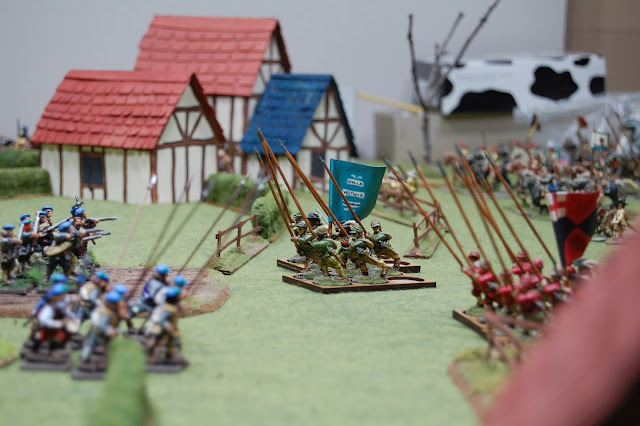 New unit profiles were included this time for freshly painted Scot Covenanters: lancers (which were Mounted Yeomen from Lion Rampant straight up with shorter range because pistols not bows) and frame guns (a cheaper but more fragile cannon than a light gun). 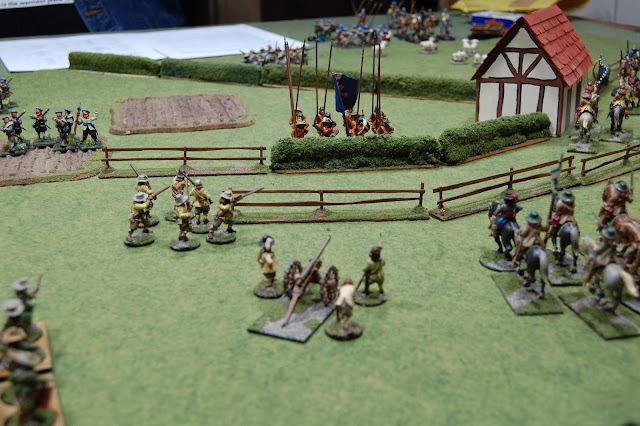 Posted by Portland Little Wars at 6:27 AM No comments: