Here are 12 pikemen (including 3 command figures) and 16 shotte comprising a "regiment" of foot for play in English Civil War scenarios.  These are all Warlord Games 28mm plastic figures.  They are wearing orange jackets because I wanted to put a unit (of any gunpowder era) in orange, and this ended up being the one since information on unit colors during the English Civil War is sketchy.  The flag is idenitified as "Colonel Fleetwood's Regiment" and a Parliamentarian flag, so I guess this is a Parliamentarian unit (although I will probably downsize the flag by about 50%). 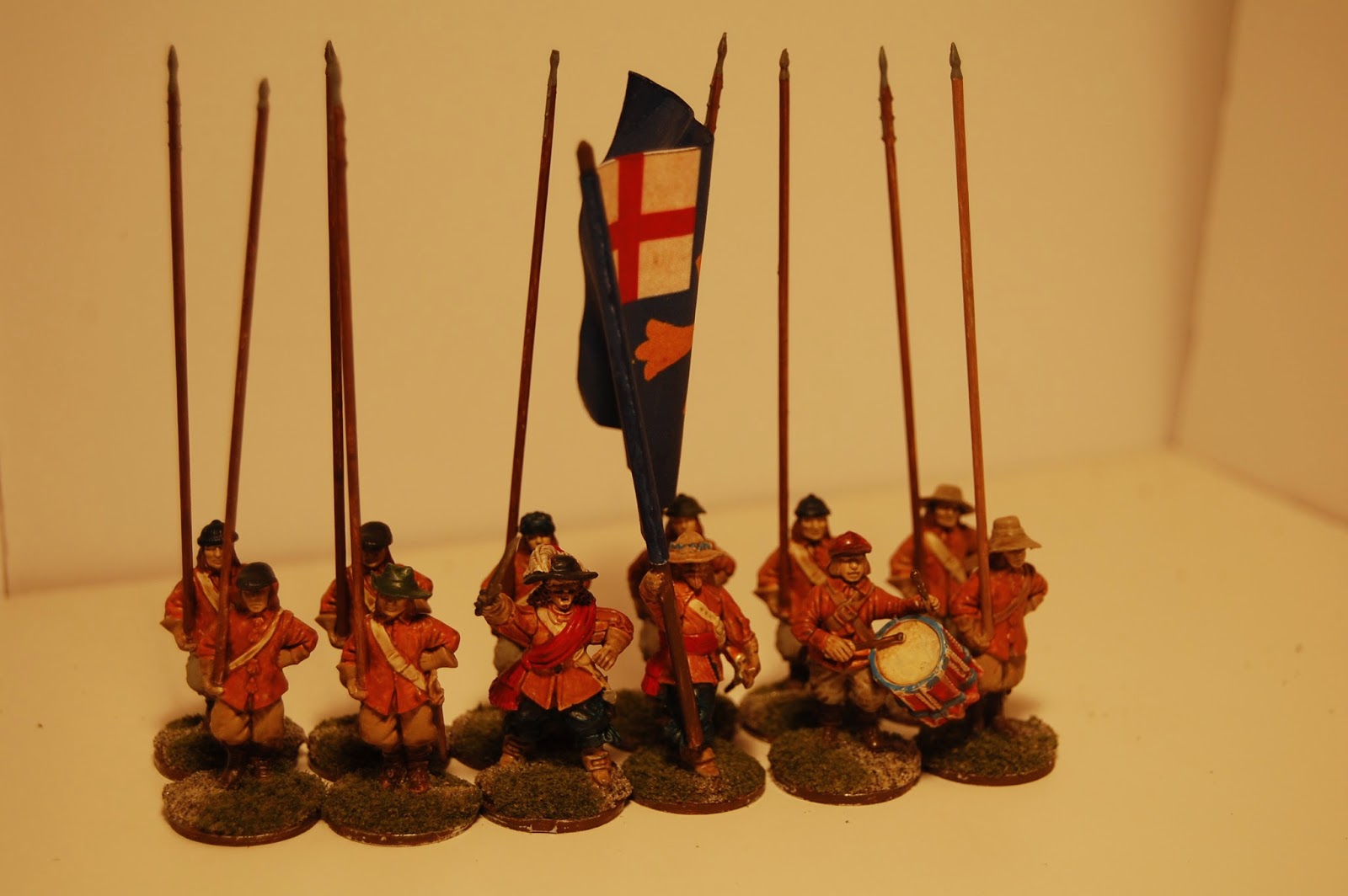 These are based individually on metal washers. I have card with magnet paper glued on which make movement trays. 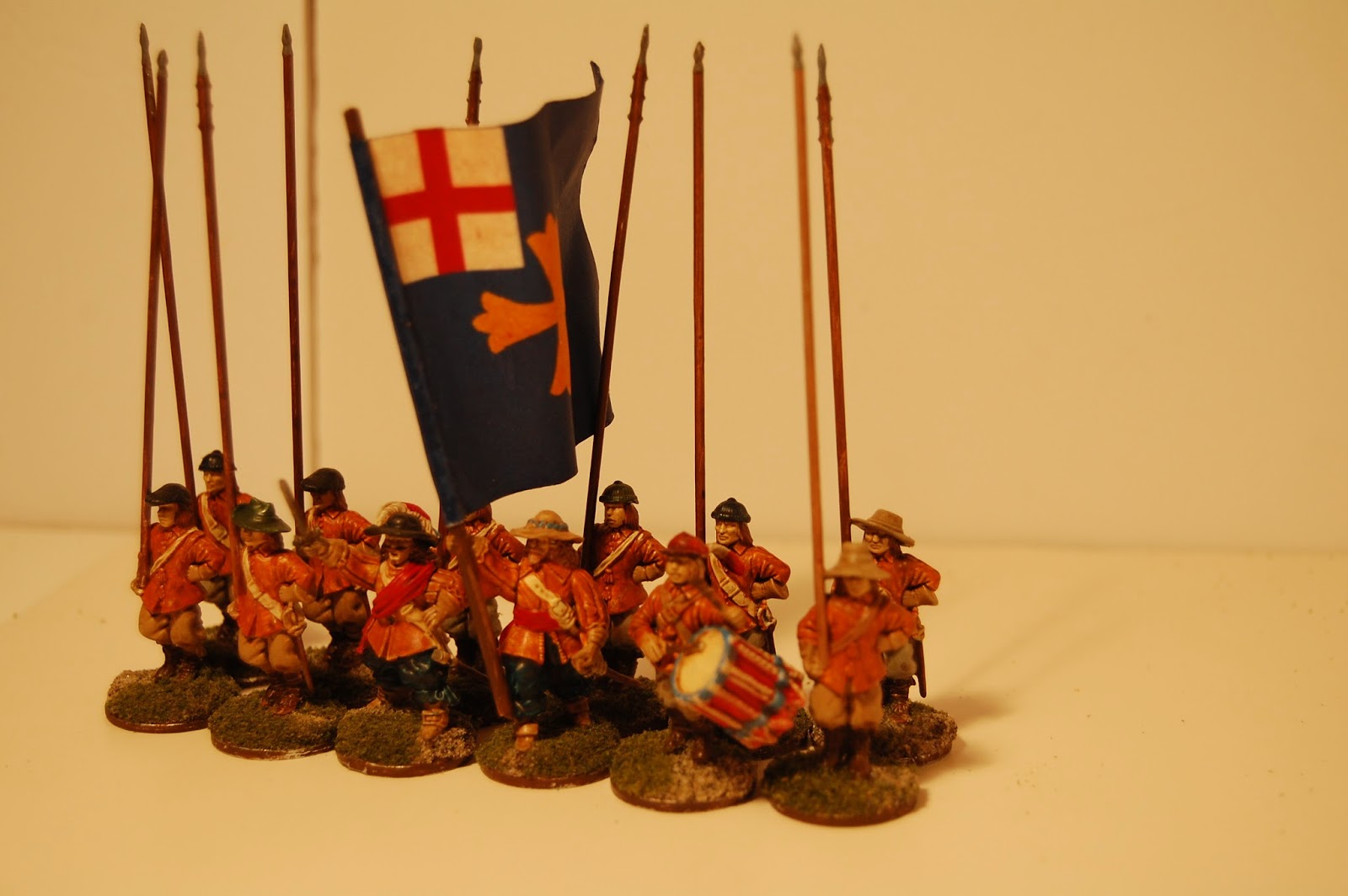 Parliamentarian officers favored orange sashes and Royalists ones favored red. This means orange might be an appropriate color for a Parliamentarian infantry unit but also means I put its colonel in a red sash by mistake (third from left, front row). 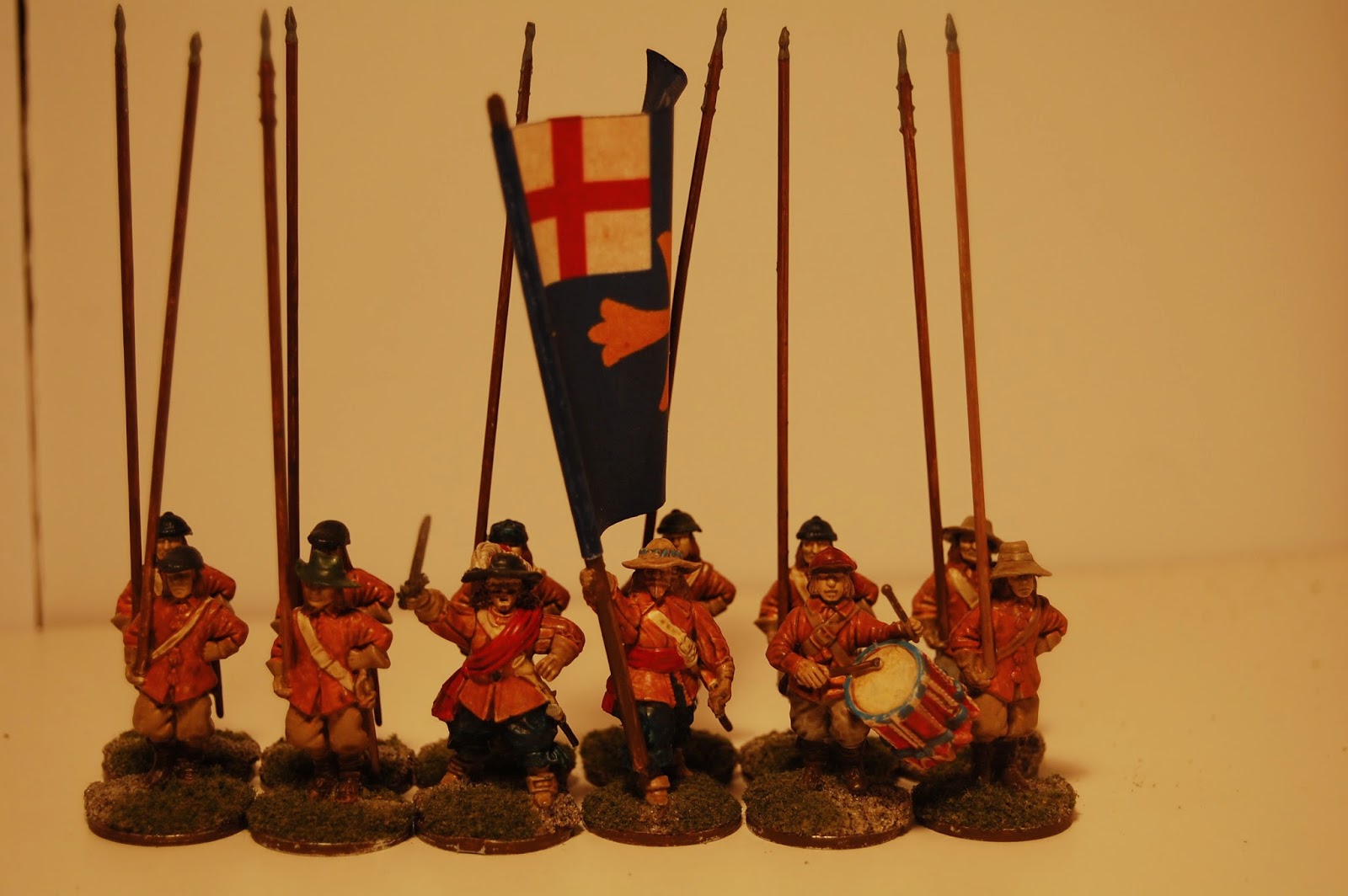 The banner is mounted on an extra thick styrene rod instead of the banner provided on the sprue. It looks like he's carrying a small tree trunk if you look closely but it means the banner won't snap off too easily (as has happened to me before).  The pikes are also quite brittle but you can cement them back together in a pinch. 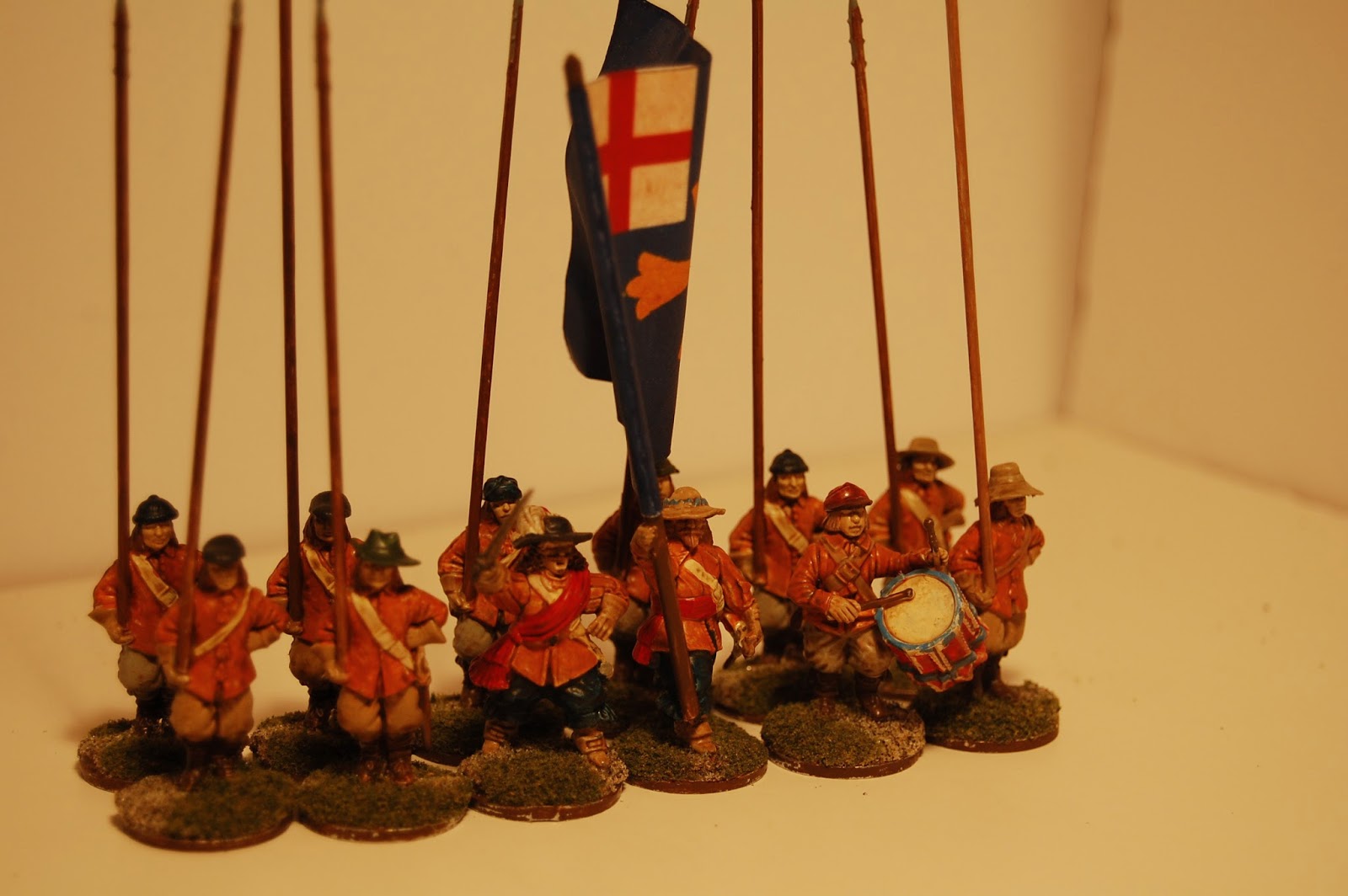 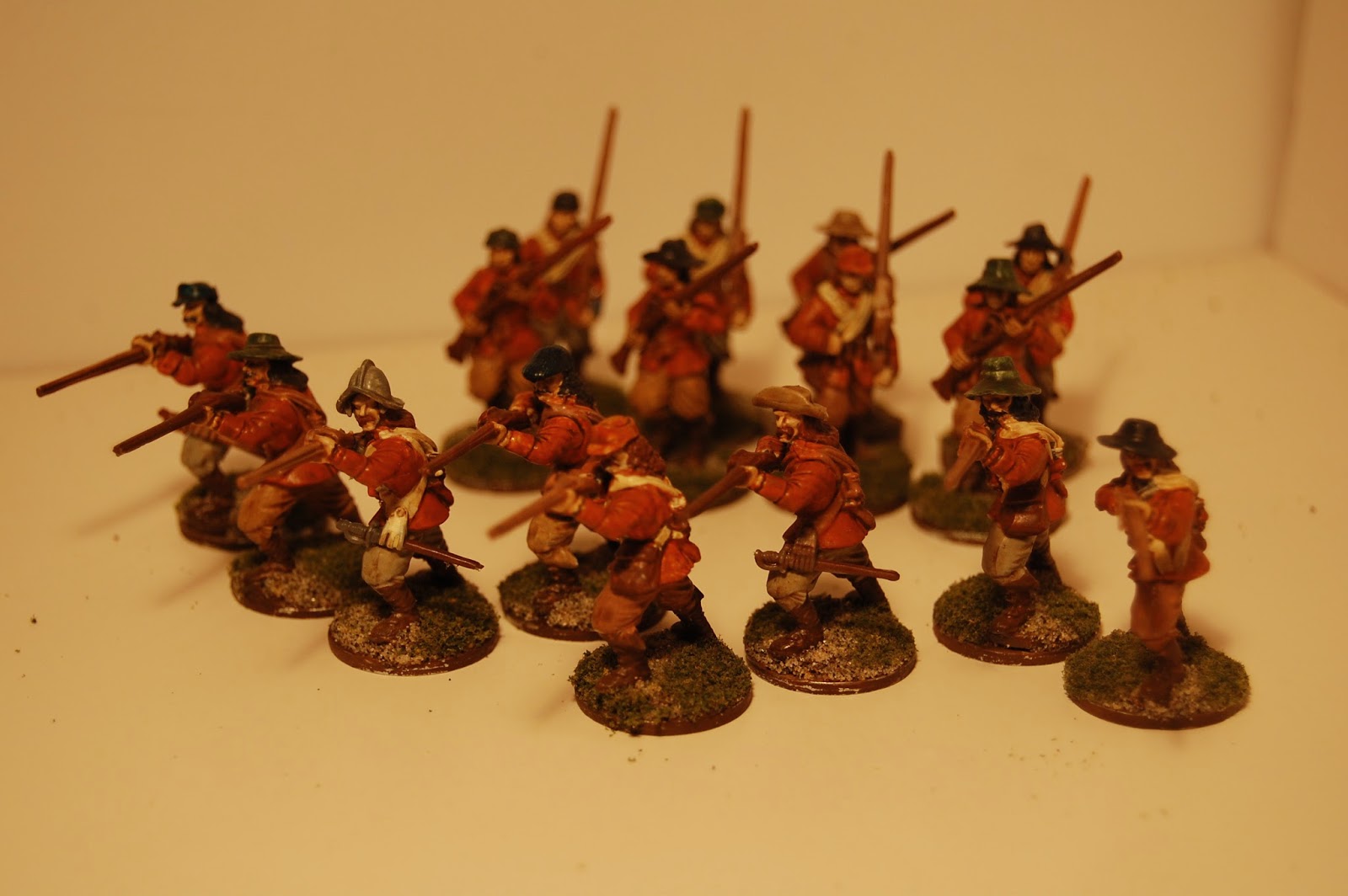 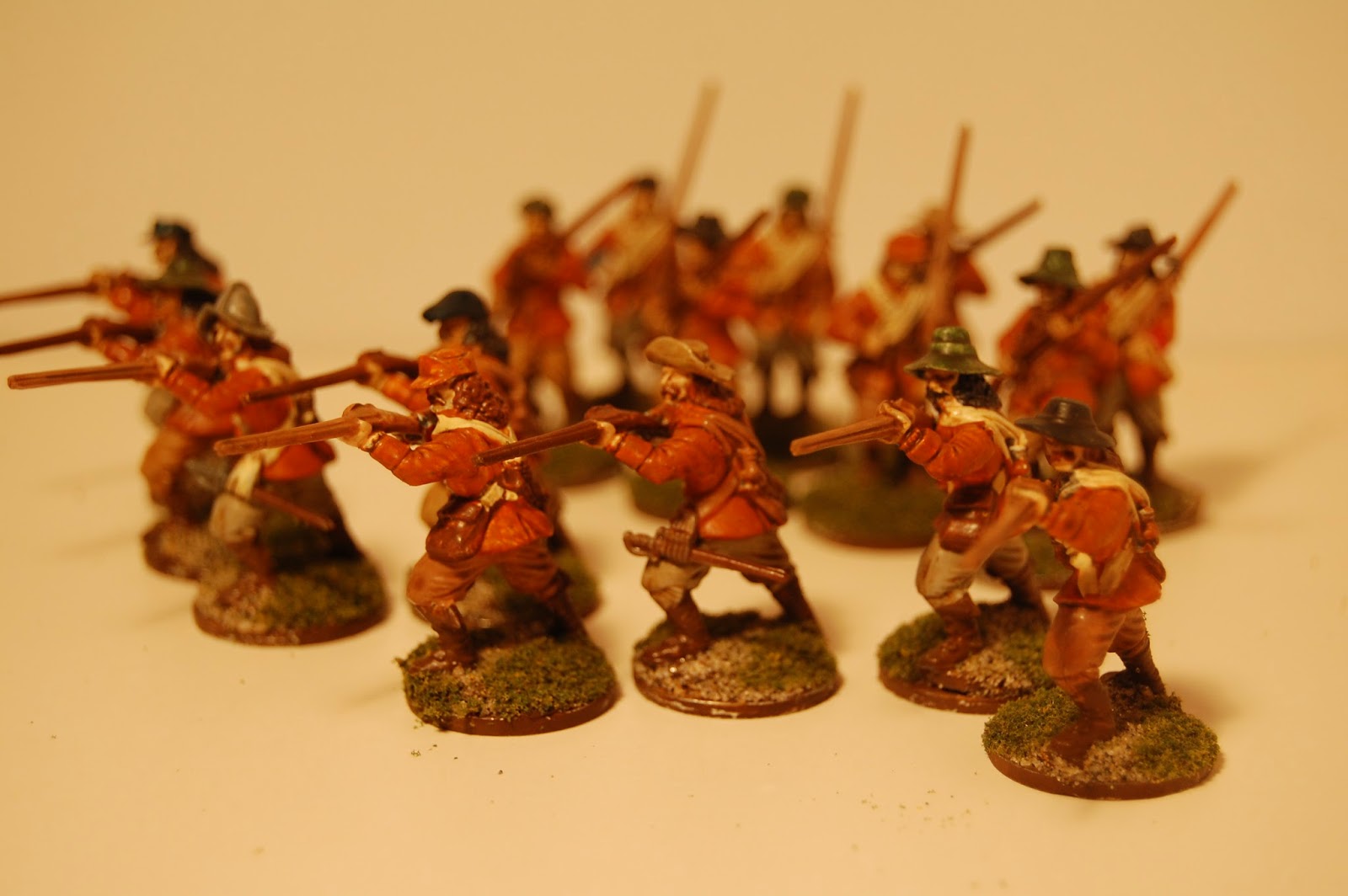 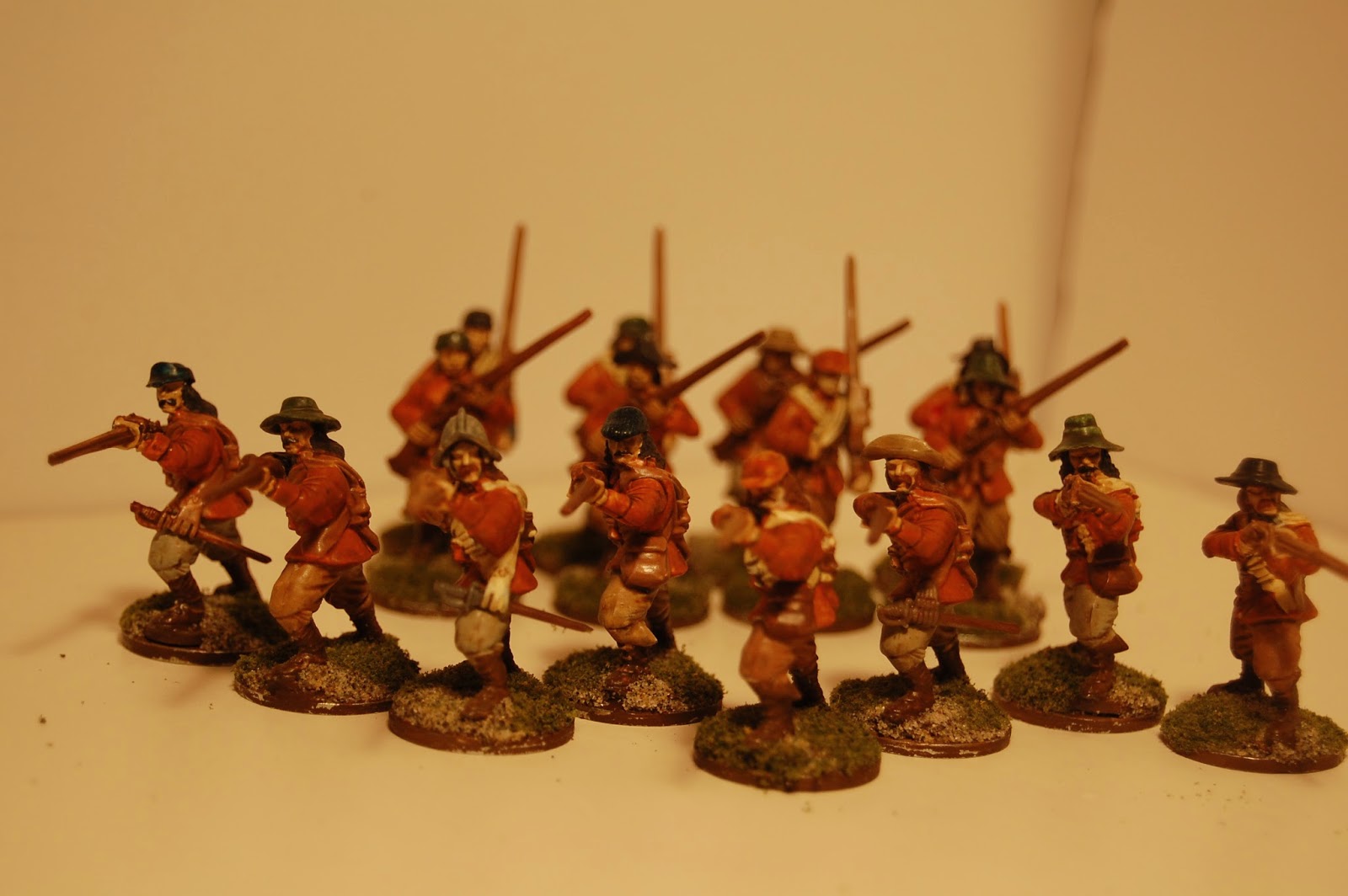 Not a fan of the lack of poses with Warlord Games plastics. You get different hats but that's about all you can really do to vary the poses. The musket poses are either firing or marching/advancing. It'd be nice to have a loading or at-ease type pose to use as the second row behind the firing poses. 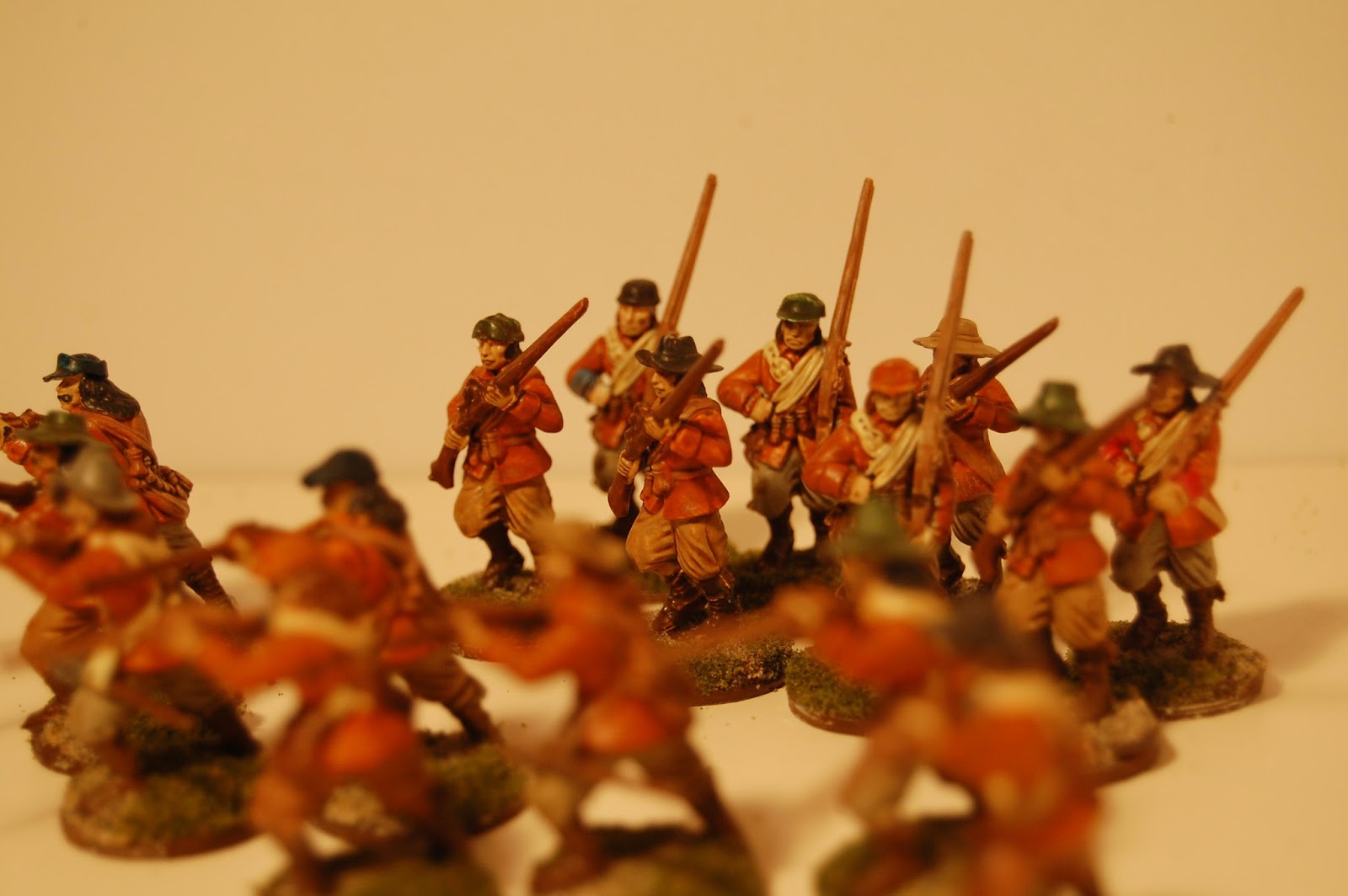 Posted by Portland Little Wars at 6:55 AM No comments: Links to this post

Here are the 13 figures from Eureka Miniatures' Beowulf & Retinue Set #2 Action Poses (100DAK04).  These are cast in pewter, I think.  You get Beowulf (up front on the bigger base, 'course), his two bodyguards (the fellas just behind Beowulf. in full head-to-toe chainmail), a "Germanic" companion with a fearsome double-handed axe (far left), a shirtless "strongman" companinion (far right), a "Moorish" spearman companion, a "shield maiden" with sword, and so forth and so on – basically every figure is sculpted to be a "character" figure of some sort. A decent number of them rank up very nicely as a shieldwall. These also rank up nicely with other Dark Age figures so you can blend a lot of them into other units.  The Beowulf figure makes a great warlord figure for pretty much any SAGA faction, and the strongman and Germanic companion could easily be champions in an Irish SAGA warband. 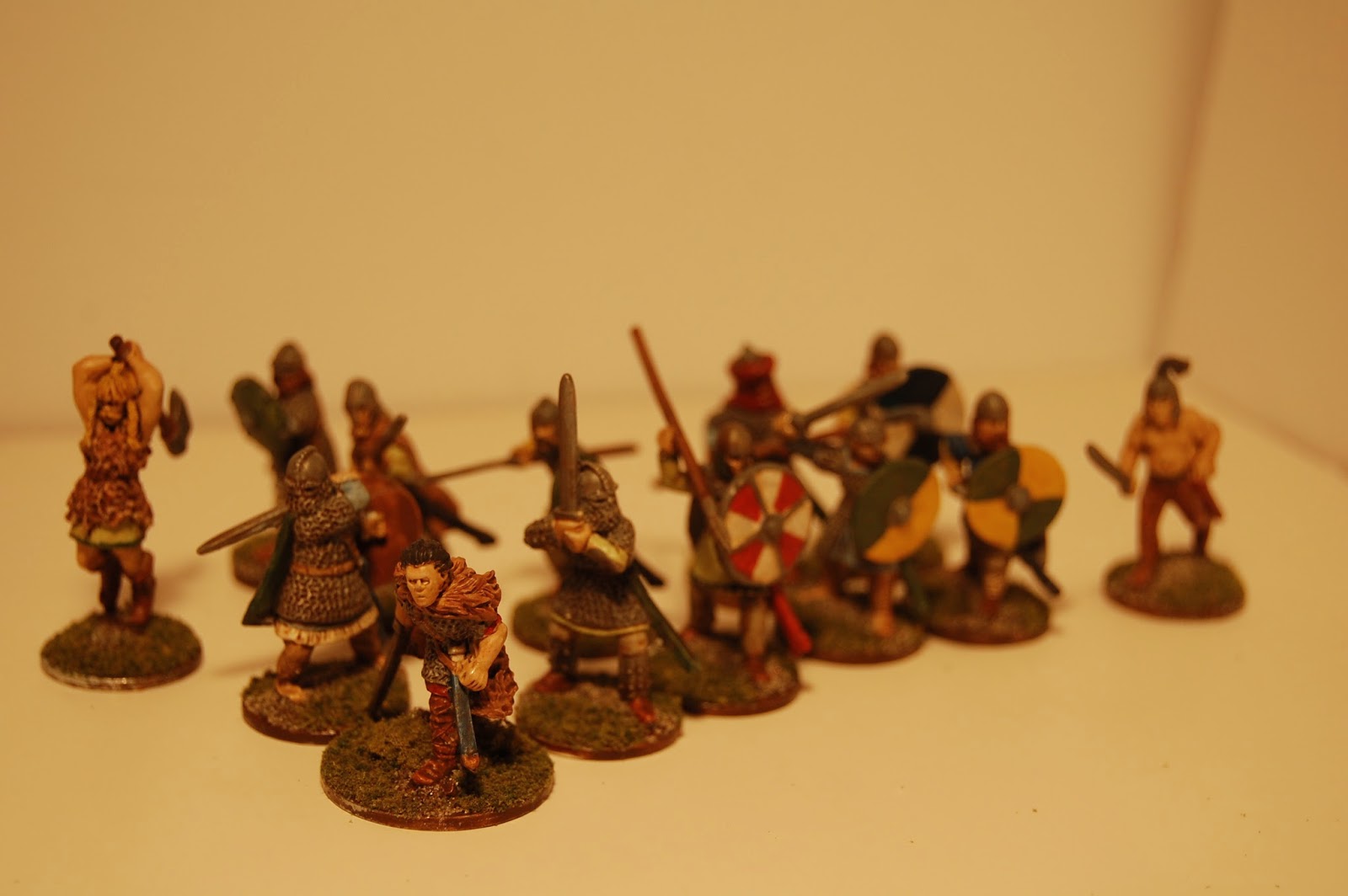 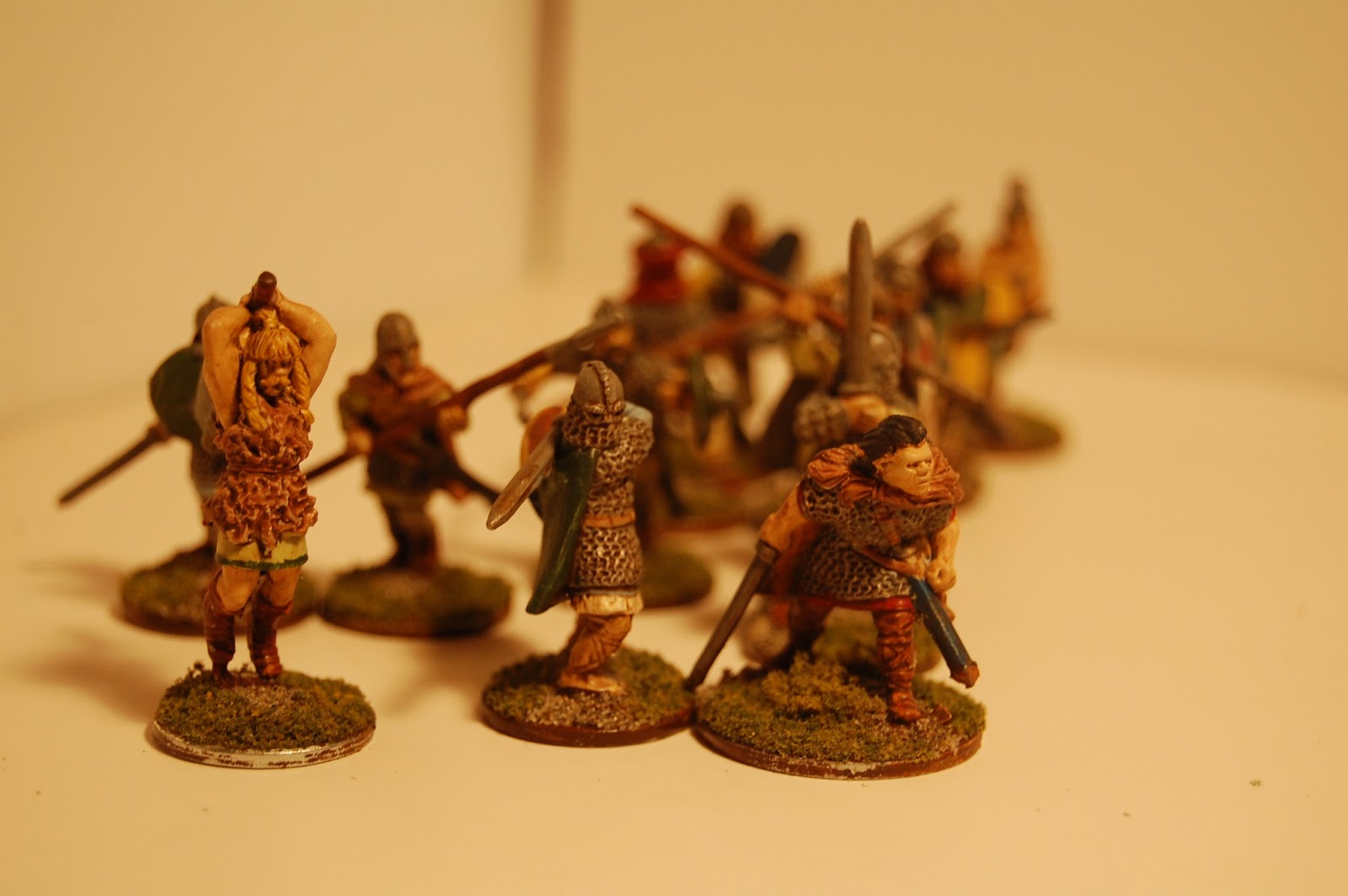 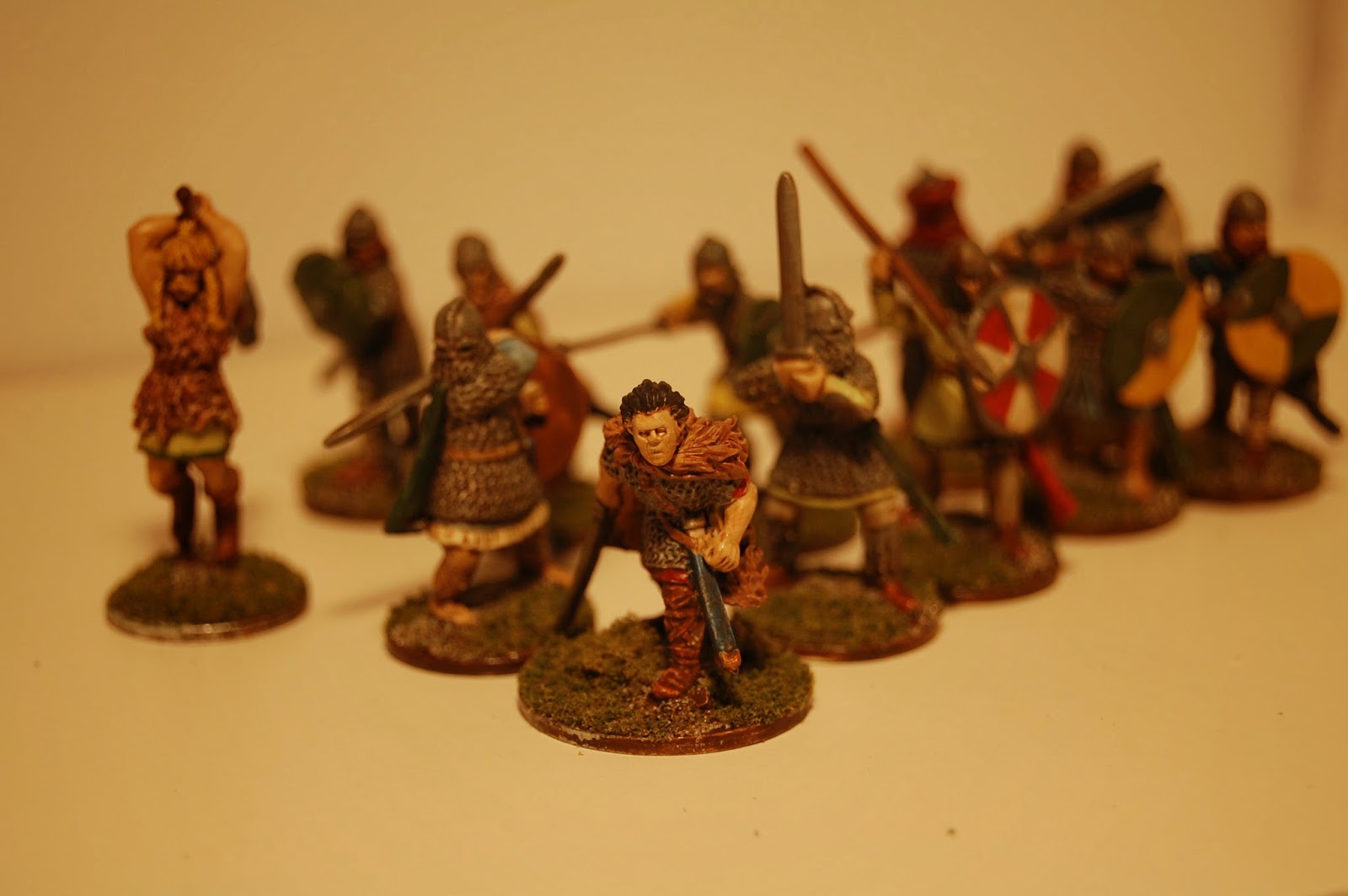 These were pretty easy to paint given that almost everyone is wearing chainmail.  I painted these simultaneously with my Old Glory Arthurian Saxons, and it was interesting to compare the pewter versus the lead figures by Old Glory. I assume it is the lead which allows the Old Glory figures to have much deeper cuts in their sculpts – especially with faces and hair. 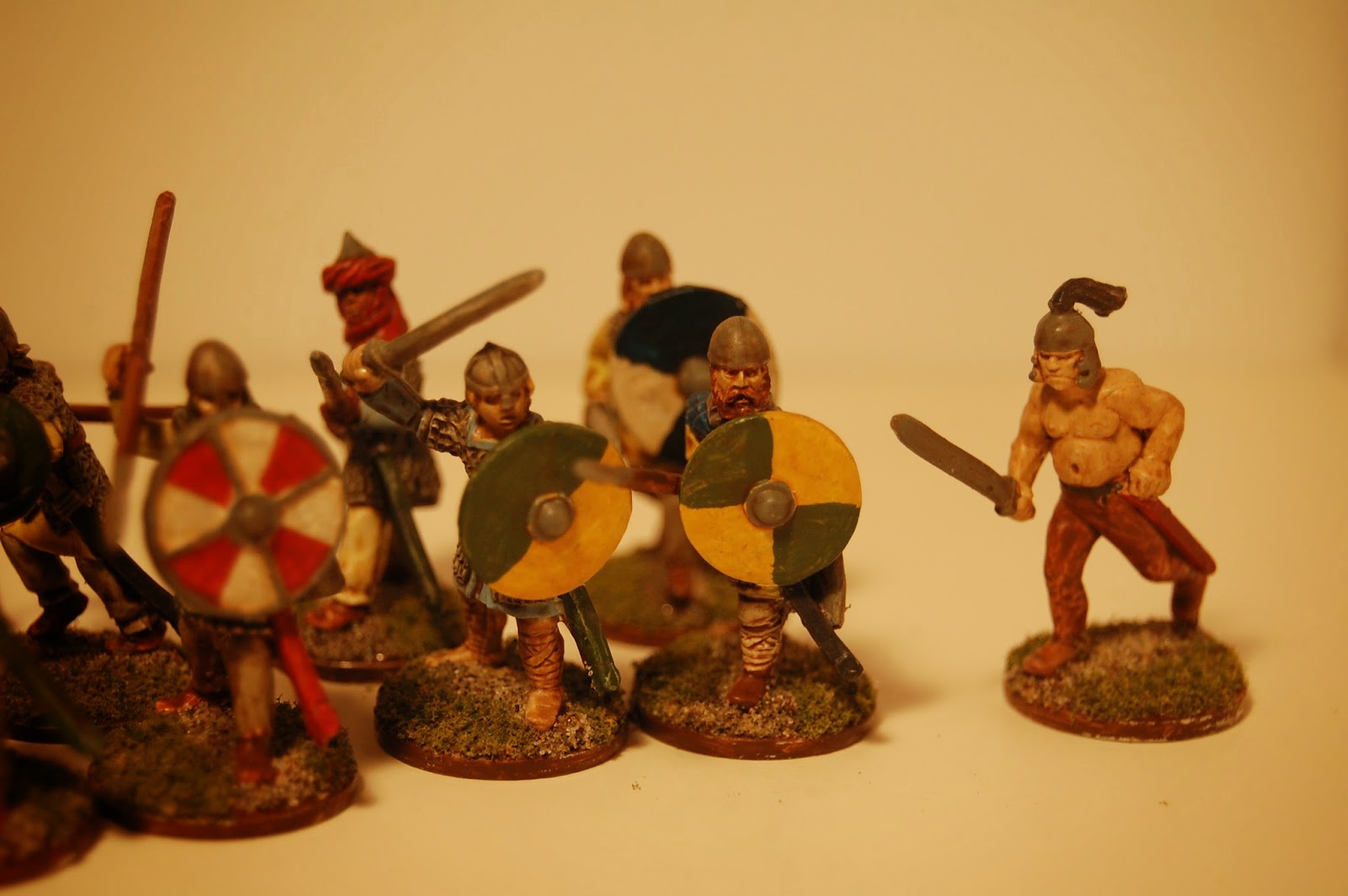 The Moorish companion is in the back on the above photo. The "shield maiden" is in front of him. 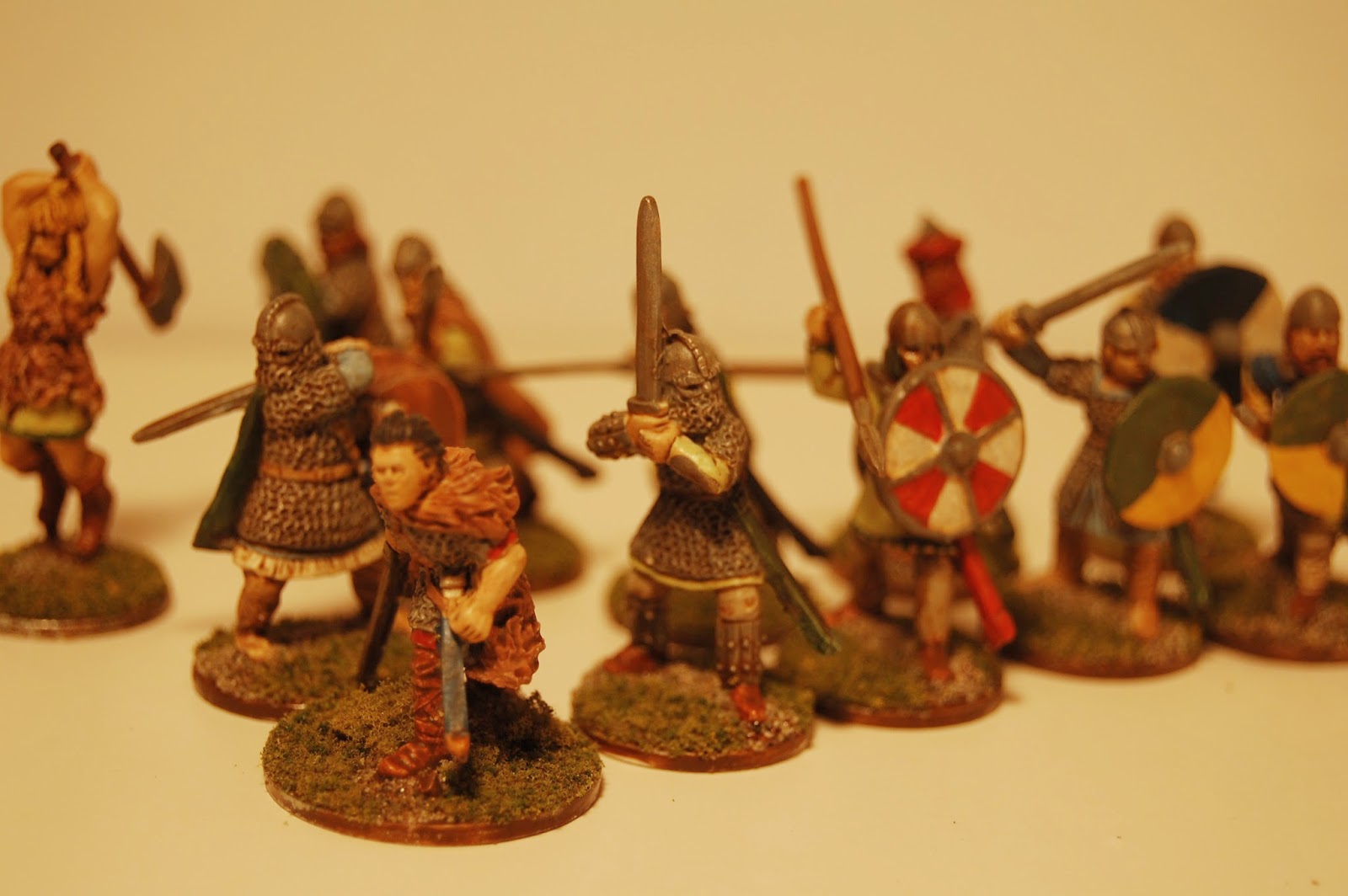 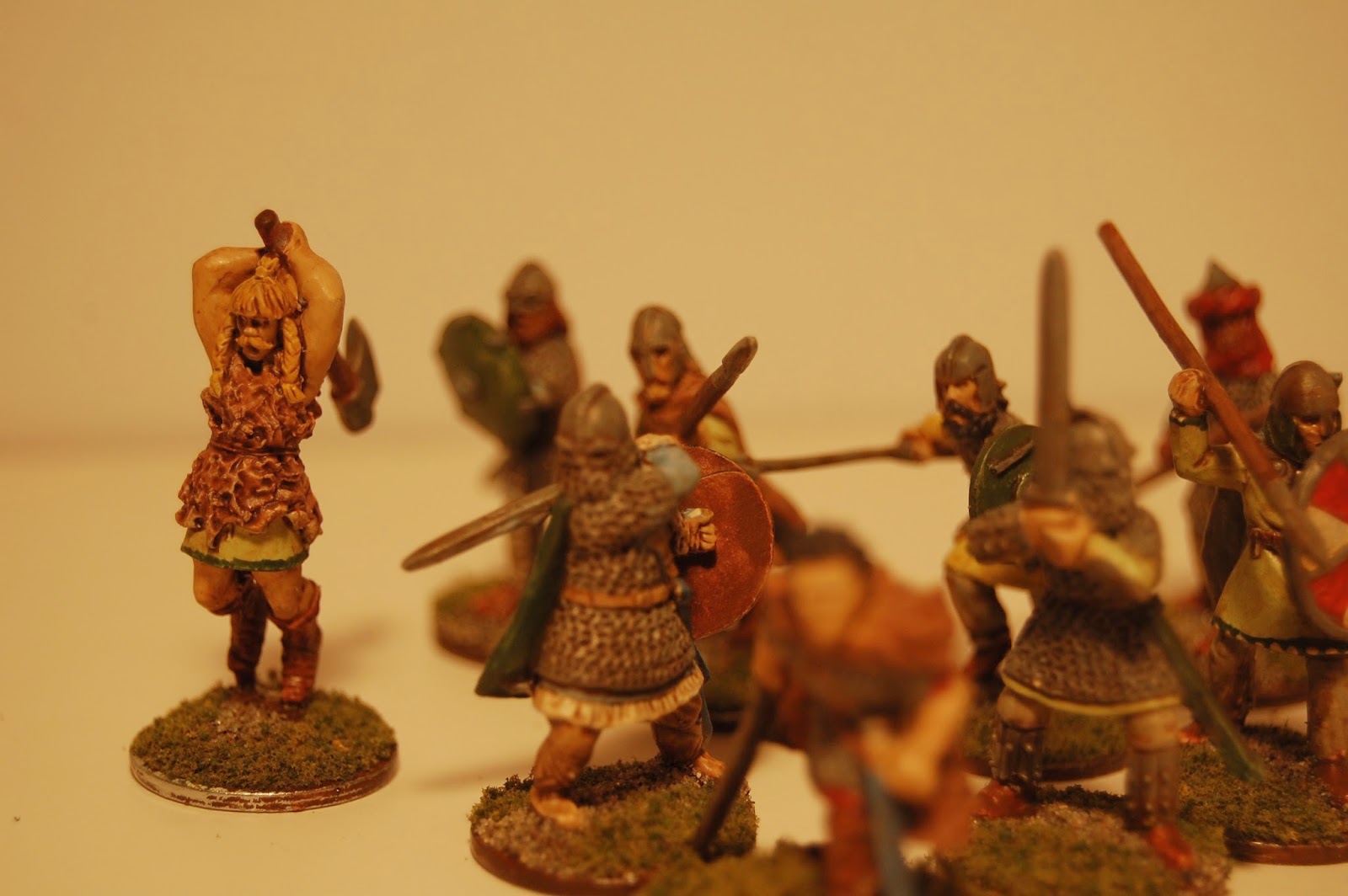 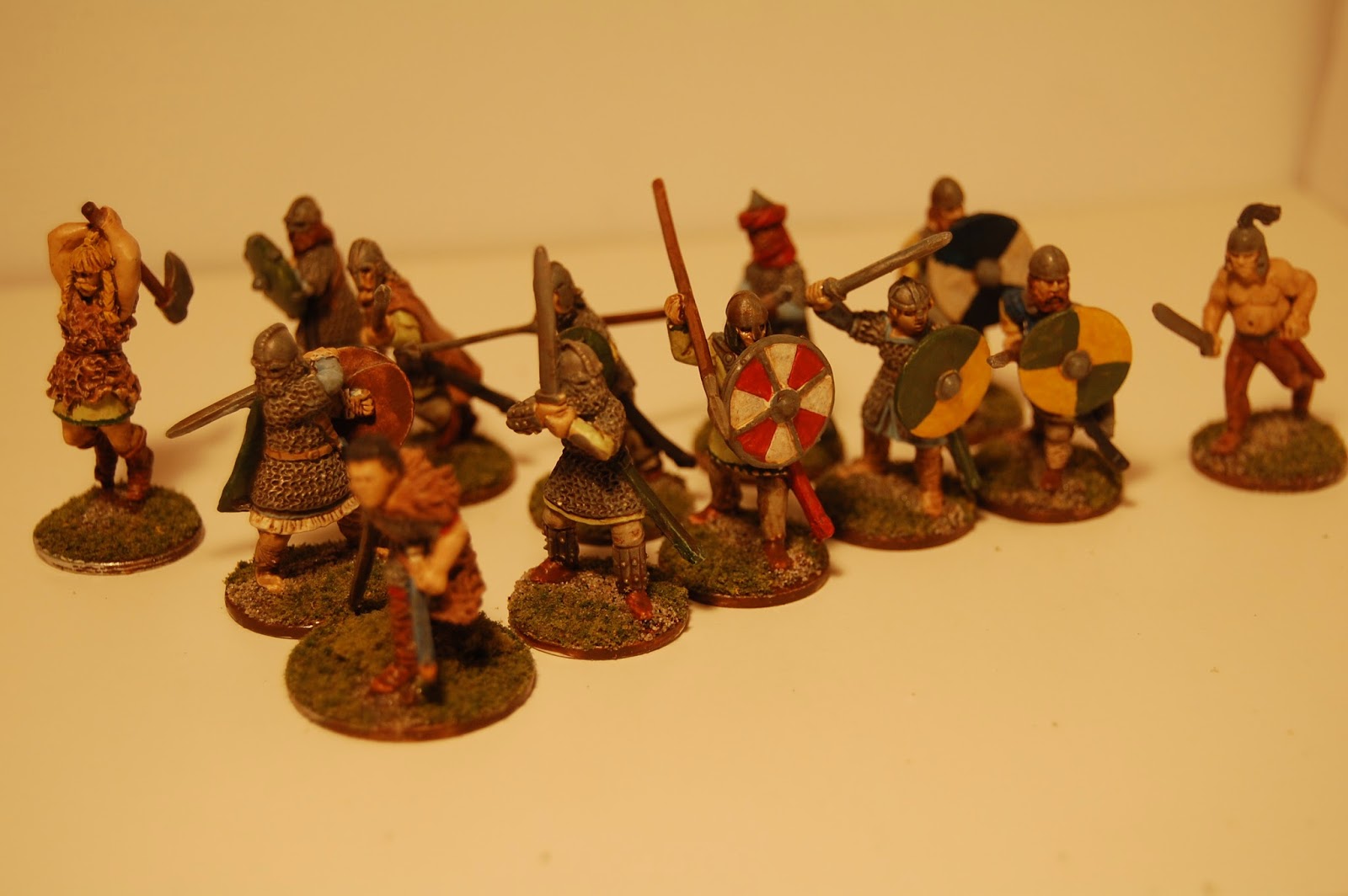 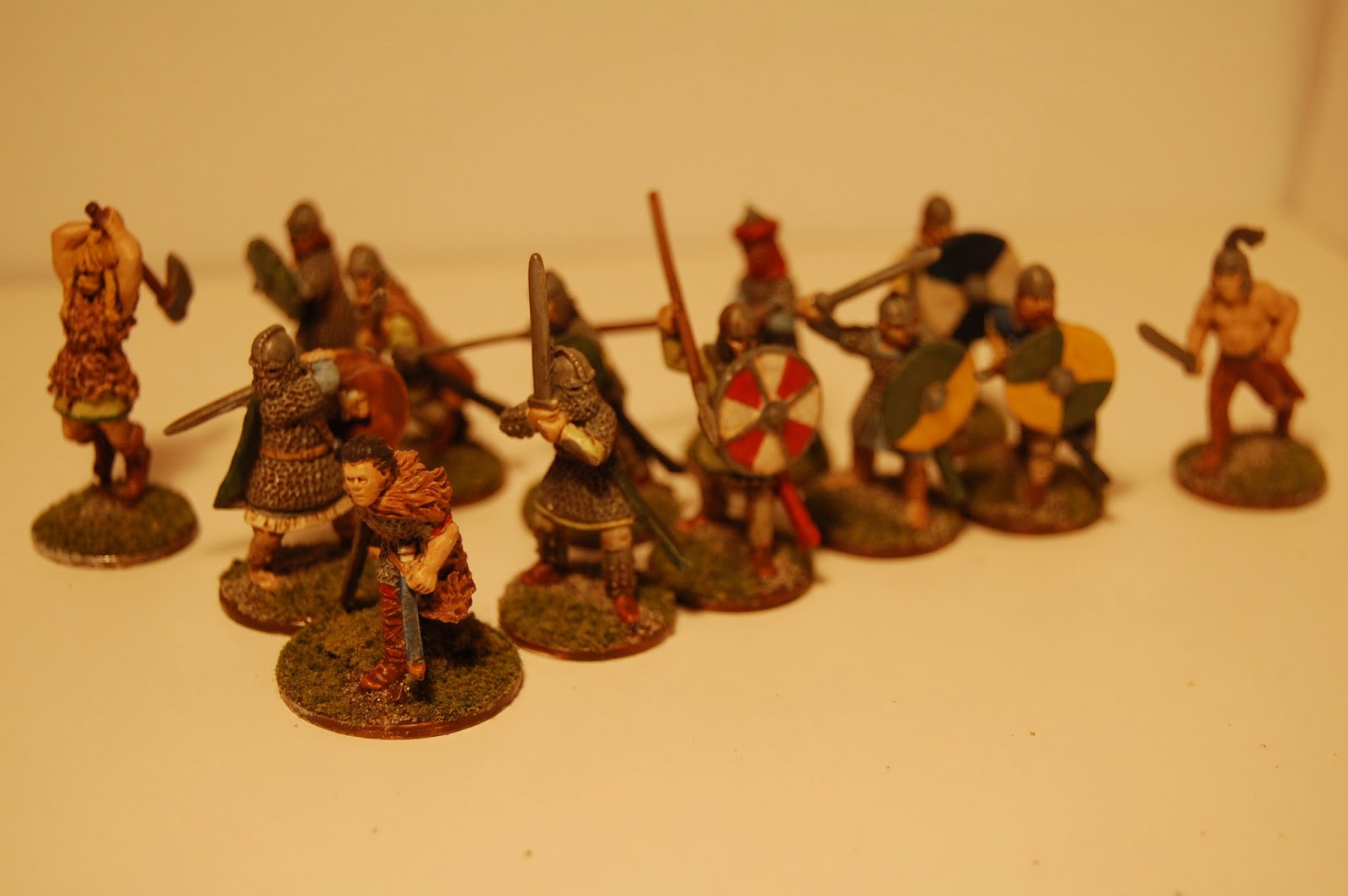 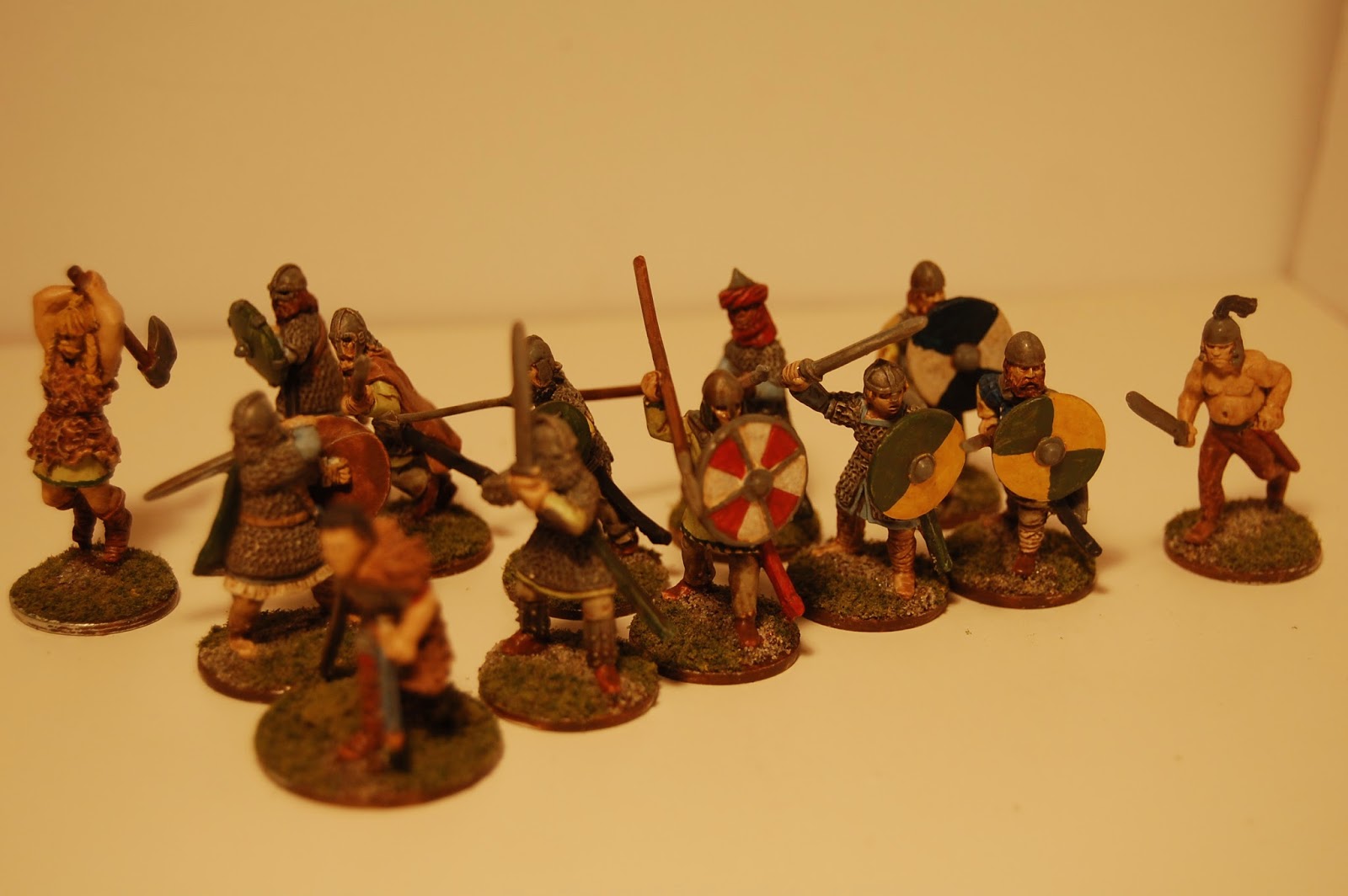 Posted by Portland Little Wars at 6:45 AM No comments: Links to this post