Last Saturday evening we played a scenario I set-up for the battle of Agnadello (1509) fought between a French army under king Louis XII and a Venetian one under Niccolo di Pitigliano (based on a scenario presented in Peter Sides' Renaissance Battles 1494-1700 Vol. 1).  The historical context was that the Venetians had positioned themselves defensively on a hill.  Louis XII was unwilling to attack them so began advancing towards the unguarded town of Rivolta, and the Venetians left their hill in pursuit.  The French then turned to face the Venetians and the battle ensued.  The set-up is therefore that the French right and Venetian left are facing each other, but the French left and Venetian right are still in marching formations parallel to each other and not deployed in anyway.  This game was set-up for four to six players but it ended up just being me and Pete (no objections here, I like being greedy sometimes and playing with as many of my little soldiers at once as possible!).  Each side didn't really have a "center", so basically each flank had three officers commanding some assortment of units. 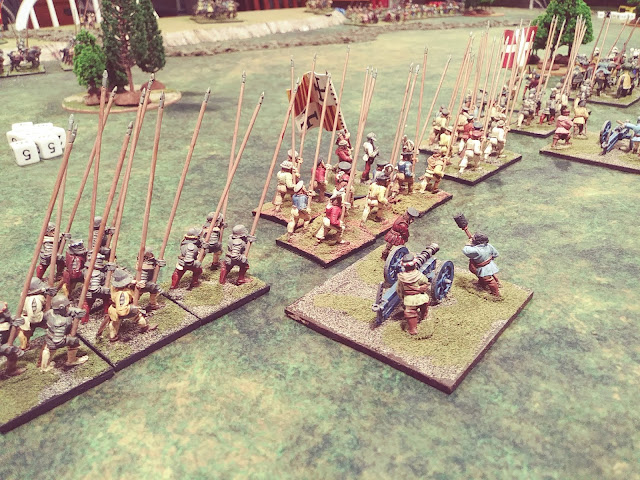 The French left consisted of four units of elite pike plus two light guns, and a lone gendarme unit. 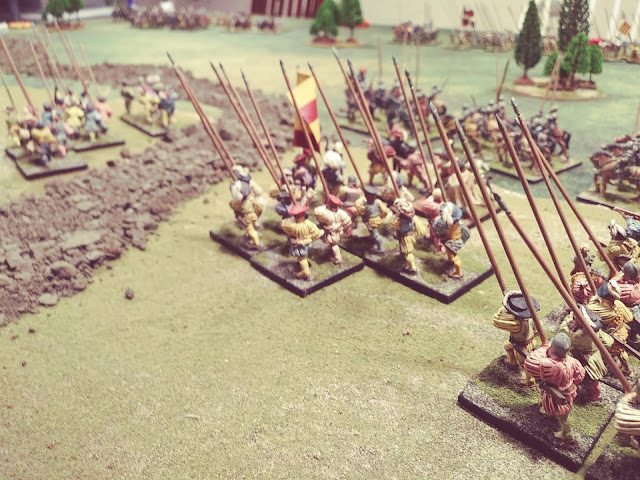 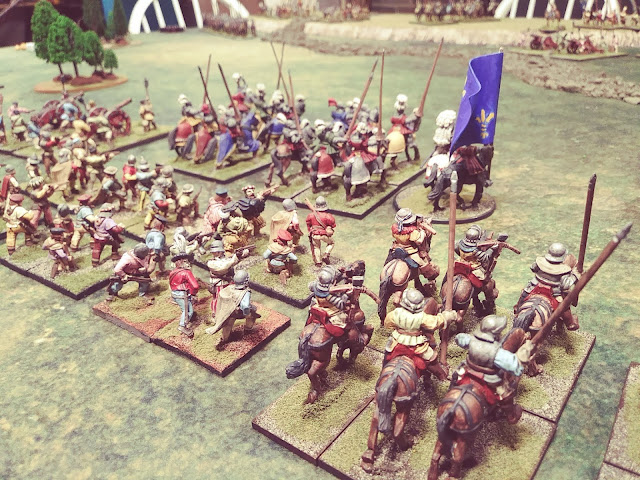 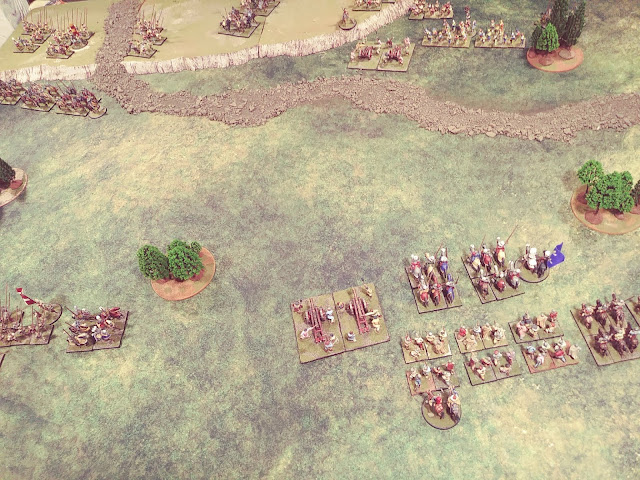 (Above: starting positions, French at bottom, Venetians at top)
With the exception of the far right flank, the entire Venetian army was on one side of a dry riverbed (rough ground).  My plan at the beginning of the game was for the stradiots come down off the hill, cross the river bed, and beginning harassing either French flank from the center.  Meanwhile, the heavy cavalry on the right flank would also try to move to the center and then attack the French right.  The French right would be kept busy by the two Landsknecht pike units aggressively advancing forward.  The landsknecht on the left would do their best to keep the Swiss occupied. 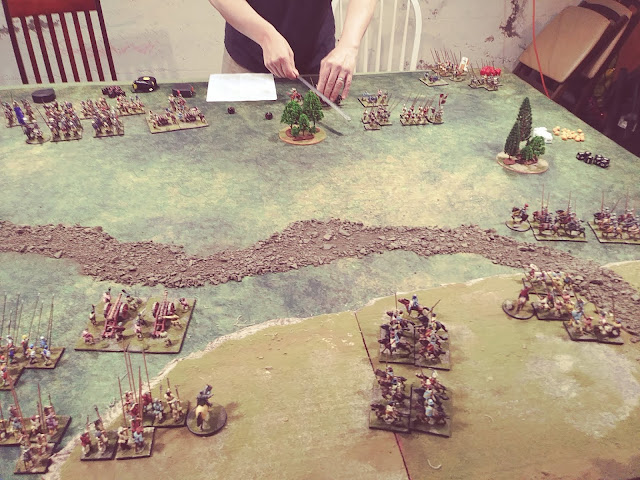 (Above: game underway!)
Of course, what actually happened is the heavy cavalry just sat dead still for three turns or so.  Likewise the stradiots were very slow to move. We were using several rules adjustments from a recent issue of Wargames Illustrated ("Renaissance Rampant"), namely more incremental range options on artillery (which had a nice effect) and increased movement rates for pikes (8" instead of 6", which I also liked).   The increased movement rates meant that the Swiss and landsknecht pikes on one side quickly came to striking distance and there was some very aggressive combat on that flank.  On the Venetian left, the two two Landsknecht pike units (Victor's pike!) did indeed push forward aggressively into a field of arquebusier fire, and although both were broken before reaching any enemy units, they did ALMOST close the gap. 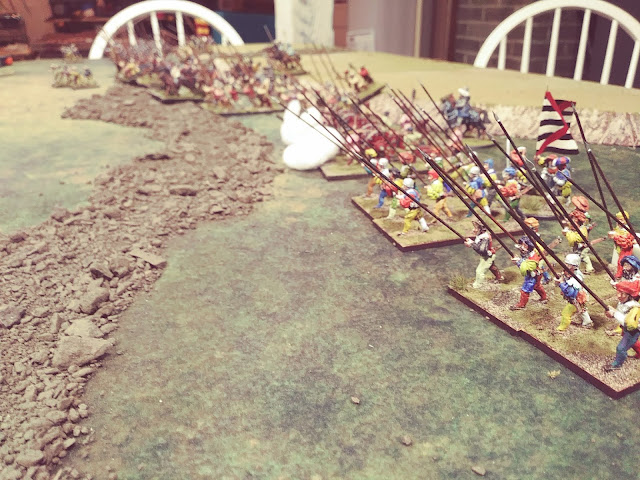 (Above: landsknechts on Venetian left begin their advance across dry riverbed with artillery support) 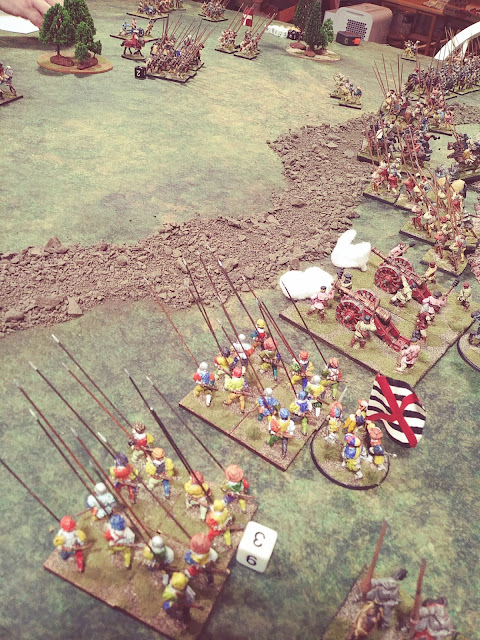 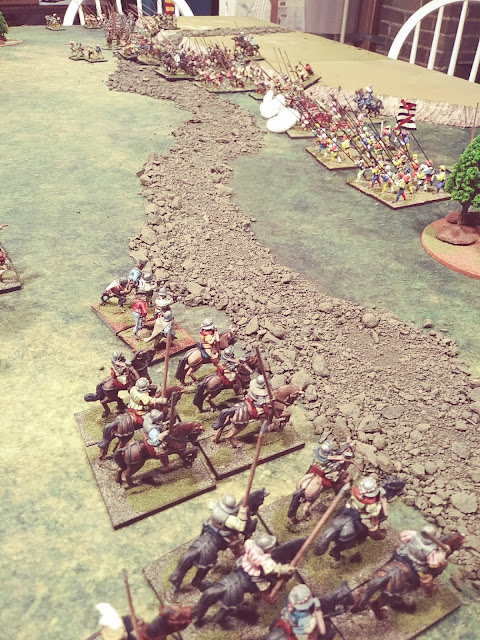 
Meanwhile, French gendarmes made quick work of my Stradiots, and the next thing I knew the game was almost over!  Instead of tracking points lost, for this game I just totaled the number of units and said we would stop the game when one side reached 50% casualties and then evaluate the board.  The French were able to knock my medium guns and that pushed them over the finish line.  Looking over the board, only a lone Italian men at arms unit was on the French half of the field, and the Italian left was non-existant with several French units in that quarter of the board – so the field clearly belonged to the French! 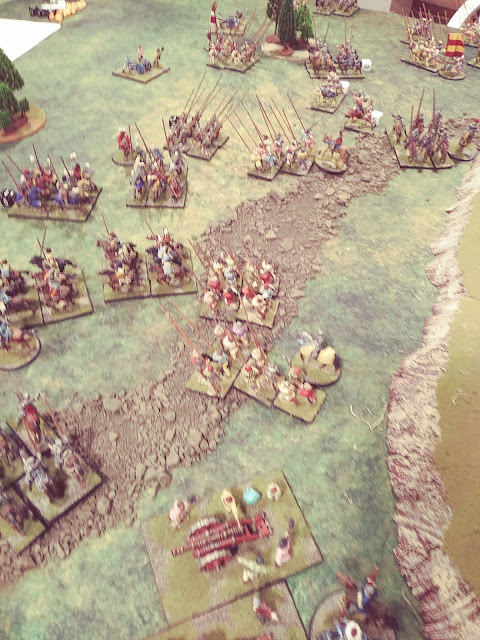 (Above: things turning into a right hot mess! In center left of photo, Stradiots have finally crossed  the riverbed but are confronted by French Gendarmes. Pike blocks approach and clash with each other beyond) 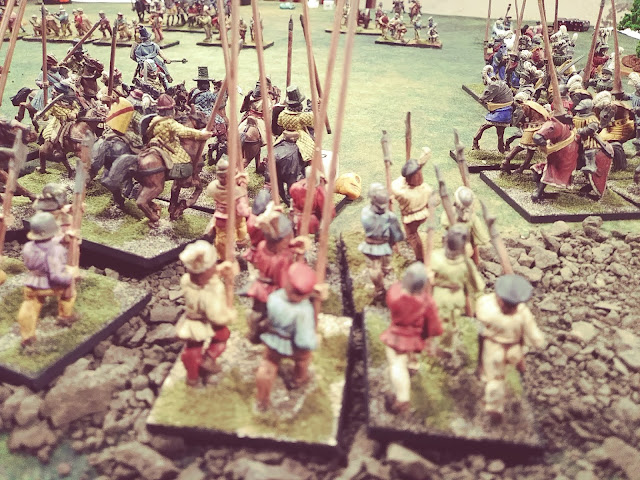 (Above: action in the center) 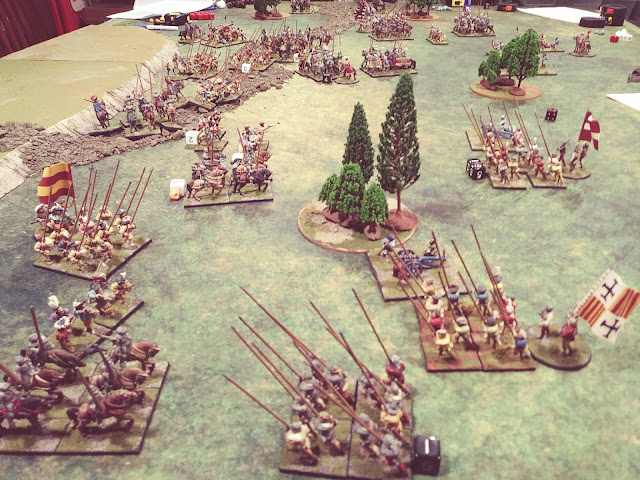 (Above: looking down the line from the French left) 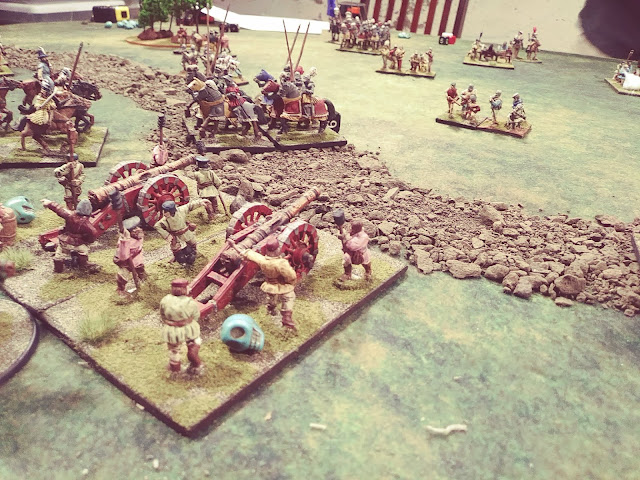 (Above: I thought I had the French Gendarmes dead to rights what with a point-blank cannon shot but I bungled the dice roll!) 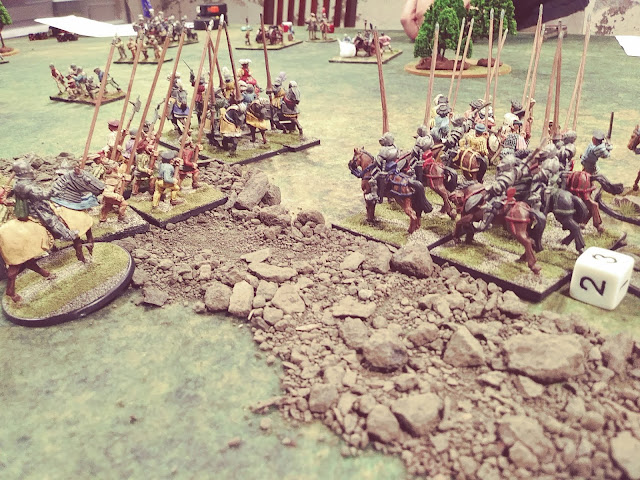 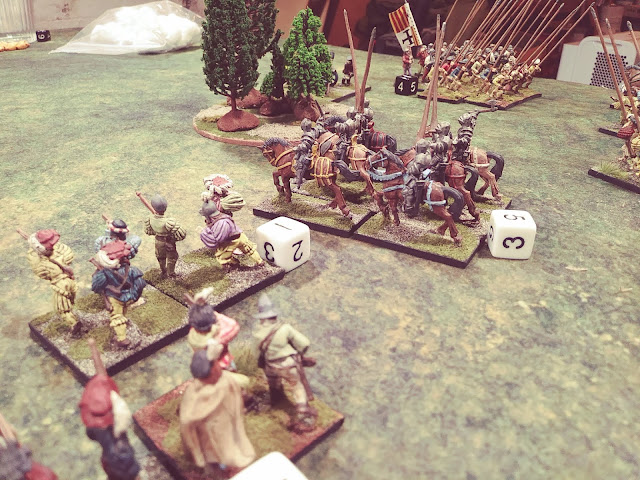 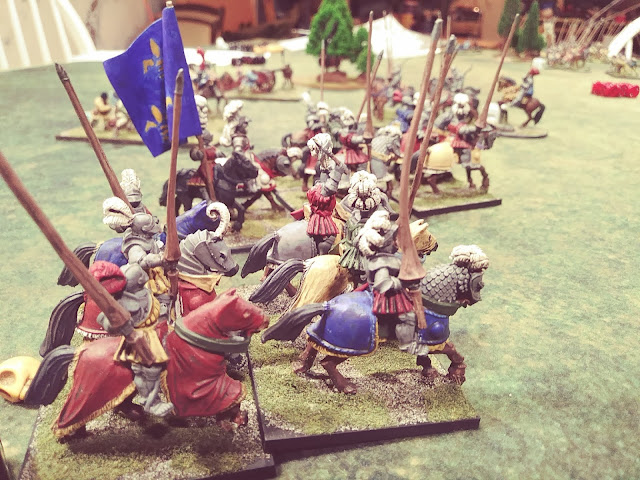 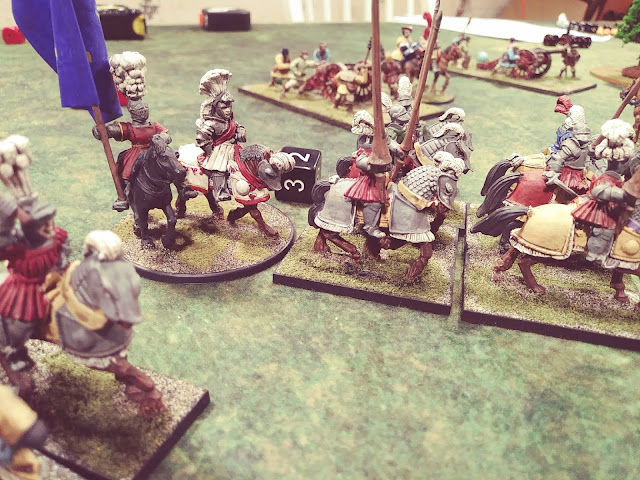 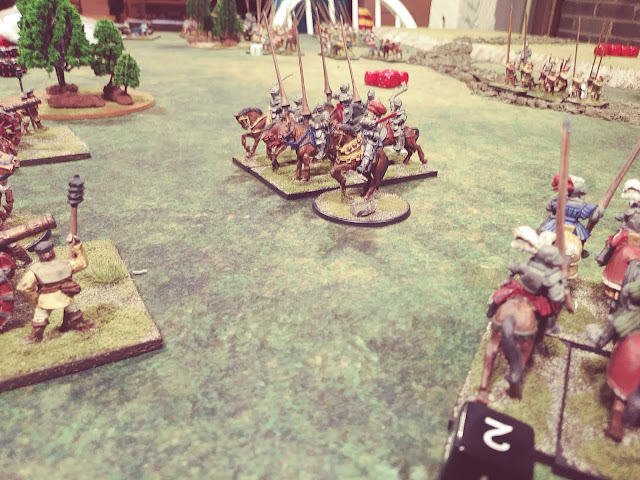 (Above: the last Venetian men at arms unit) 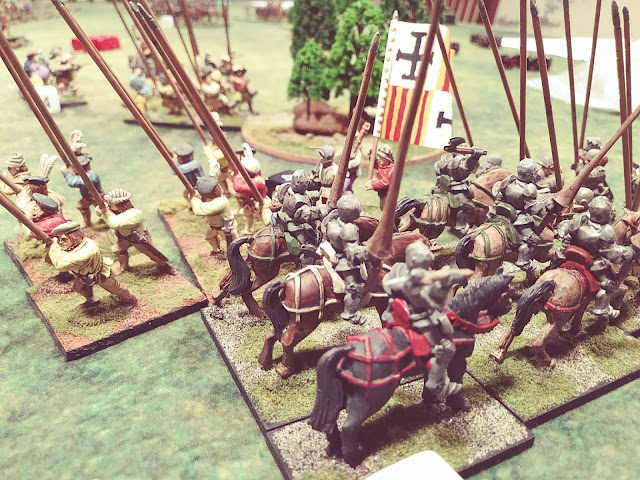 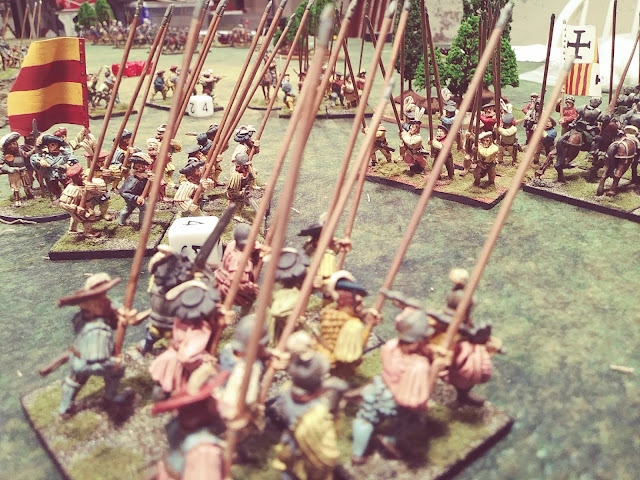 There followed some post-game discussion.  It was agreed that the bidowers-as-arquebusiers stat block is a little unbalancing, simply because they are able to potentially Evade (and usually do) any attacked and get a shot off in the other players turn, which makes them very difficult to chase down by superior melee units such as pikes and even heavy cavalry.  The "Renaissance Rampant" article suggests an arquebusier profile very similar to bidowers but with the Evade rule removed (they can still Skirmish), which seems like a nice minor tweak to make.  The other tweak would be that artillery not count towards the 50% casualties, since they are too much the low-lying fruit in that instance.  I really like the artillery rules, which made artillery potentially powerful, but not guaranteed as such.


Overall it was a game which was just a wonderful mess of melees that was fun to play as well as to witness.
Posted by Portland Little Wars at 12:55 PM