A good year for playing games, if little else. The number in parentheses is the count of games played.

Painting-wise 2017 was a toss-up.  I painted the majority of my Crimean War 20mm collection starting last winter, so that was a big accomplishment.  The other big to-do was a bunch of ECW cavalry, two more ECW pike units, and getting a good start on Italian Wars infantry. The ECW and Crimean work allowed me to run some good games.  But I don't feel like I made a lot of progress on the unpainted backlog, and I have a few collections that feel incomplete and unused that I feel could be more active with a concentrated effort.

I sold my entire 54mm painted Sudan and 54mm Seven Years War collections for comparatively princely sums – so I now waste a lot of time contemplating new eras to collect, paint, and game with.  My self-control is evidently much better because I have not gone through with any purchases yet, as I want to decimate the Italian Wars lead mountain first and foremost!  One very likely target is a Battle of Mount Badon project, mainly because I have about half the minis already painted (they would need to be multi-based) so the additional buy-in is comparatively low.  Other projects I have contemplated include 13th century medieval, 11th century Byzantines vs. Bulgarians, and 16th century Safavids vs. Ottomans.

The only certain goals for 2018 is the completion of two Italian Wars armies and to host a game with those armies at Enfilade in May, as well as to organize the third annual Ambuscade! gaming event here in Portland.  Other things I would like to accomplish include some selective selling of other painted figures and unpainted figures, and making a big buy-in on the Next Project, whatever it may end up being.

Posted by Portland Little Wars at 5:50 PM 2 comments: Links to this post 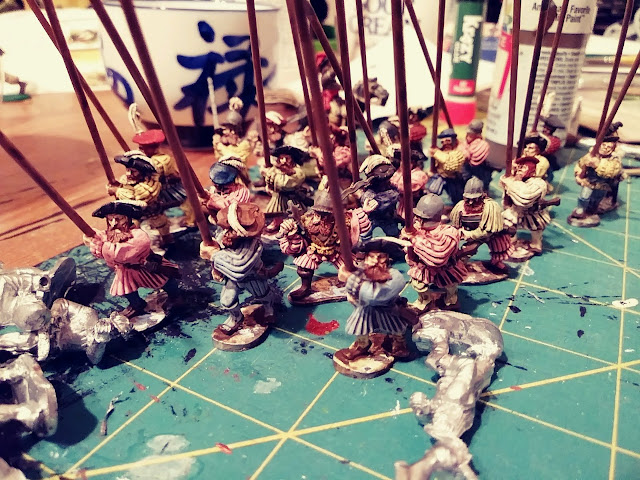 I have a large lead mountain of Italian Wars figures.  Enfilade is in May 2018.  I figure I can kill two birds with one stone, and have a game to run at Enfilade and also totally decimate my largest unpainted collection of miniatures.  Two units of pikes, two units of arquebusiers, and a unit of halberdiers, plus a mounted commander, were already completed back in June.


In late November I started three units of Landsknect pike (36 + 2 command), and as of today I am happy to say they only need their clear coats and to be based and flocked.  My goal was to have these done by the end of December, but I will end up beating that mark by a week.  This allows me to get a head start on the next, most insane target of my painting schedule, which is to simply paint all remaining infantry by the end of January.  This consists of 108 figures, which seems like a lot, except that I painted 96 Crimean War figures in a month for Ambuscade, so I figure how hard can it be?
DECEMBER
36 landsknecht pike plus 12 Swiss pike + 1 foot command stand + 24 armored pike.
JANUARY
48 arquebusiers (36 landsknect and 12 Swiss)
24 Landsknecht doppelsoldners + 12 Swiss halberds
24 armored pikemen
2-4 command stands
FEBRUARY
18 Gendarmes + 6 'Archers' cavalry + 1 mounted command stand
18 Elmeti + 6 Genitor cavalry + 1 mounted command stand
MARCH
12 Stradiots + 20 artillery crew + 4 guns + 1 mounted command stand


APRIL
6 mounted crossbow + 6 mounted arquebusiers + 1 mounted command stand
4 baggage train wagons
This schedule is front-loaded for me to just crank out all the infantry in the first two months, which should make the three months approaching Enfilade less frantic.
Posted by Portland Little Wars at 8:22 AM No comments: Links to this post

I ran my Black Powder 'Almost the Alma' Crimean War scenario at Ambuscade!, an one-day historical wargaming event that I helped organize, which was very fun by the way, and anyone and everyone is encouraged to attend next December.  The scenario set-up was the same as the previous playtests, with the following changes to unit profiles and composition:


(1)   Previously all the British cavalry units were classed as "small", with their hand-to-hand and stamina stats reduced accordingly. For this game I graded them up to "normal" size, which gave the British heavy cavalry units (Heavy Dragoons and Scots Greys) eight melee dice and the light cavalry (Hussars) six.


(3)   I also calculated the point values for both sides using the appendix in the Black Powder rulebook, and using all available figures, the Russians start the scenario with a 200+ point advantage (approx. 1,200 vs. 1,000).  I went ahead with this since I figured the British need the challenge since they have so many factors in the their favor, especially the higher staff ratings.


The rough outline of the game was as follows (I did not take many pictures – I was having too good of a time!): 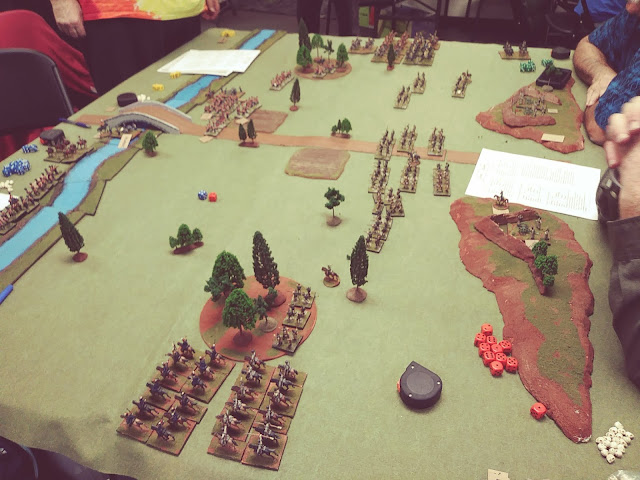 (Above: the Cossacks advance on the Russian left (bottom of photo) while the British heavies tussle with the Russian lights on the opposite side of the board)


Both sides advanced.  The Russians sent cavalry probing attacks out on both flanks.  The Russian light cavalry, consisting of dragoons and hussars, were effectively smashed by the British heavies, and the Cossacks on the other flank were turned back, despite 2-to-1 odds, by the British Hussars.  The Russians established a very long, dense firing line of infantry in the center of the table and attempted to out-shoot the British.  Most of the British infantry responded by falling back a bit to be out of Russian range but still in range to counter-fire with their longer-range rifled-muskets. 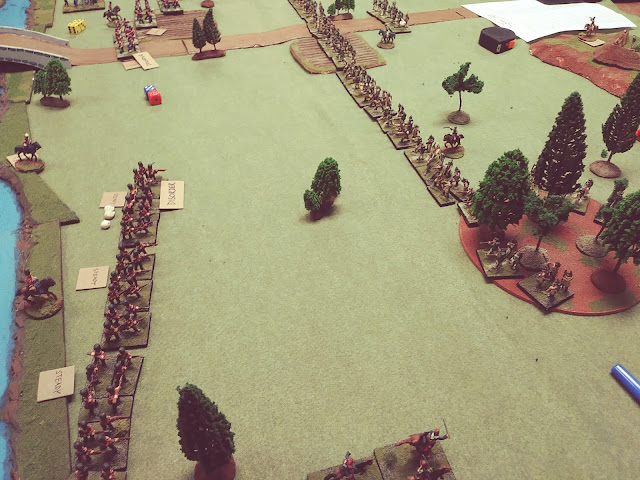 (Above: the long green line of Russian infantry straddles the board)


Meanwhile, a unit each of Heavy Dragoons and Scots Greys succeeded in getting all the way to the Russian edge of the board, and turning and charging one of the Russian redoubts, and taking the position – an automatic partial victory for the British!


At this point the Russian players conceded the game, since there was no infantry in reserve to protect the other redoubt position, and losing both would be an automatic full British victory.


I think the scenario was fair in terms of troop dispositions, and a review of the rulebook the next day confirmed that I did not adjudicate any rules wrong (phew!).  I'm a little curious why the Russian players chose to stop their advance midway across the board and engage in a musketry duel, which hurt them because it whittled down their superior stamina score of 4.  With the British heavy cavalry scattered about on the Russian flank, its seems there was a missed opportunity for the Russian infantry to put some serious pressure on the British center.  Also, a few infantry units protecting the Russian guns would have been useful in retrospect.


As in the playtests, I ignored the 'brigade morale' rule (it is optional, after all) and just tracked army morale instead – so if over half of one side's units were lost (either off table, destroyed, or on table with 'shaken' status), the entire army was deemed broken and would commence retreat.  I really recommend this method, with a visual scorecard of some sort to track how close each side is to breaking, for Black Powder and probably Pike&Shotte and Hail Caesar! as well.
Posted by Portland Little Wars at 7:30 AM No comments: Links to this post

In probably my last game of 2017, we (Pete, Andy and I) played out the relief of Montgomery Castle of 1644, an English Civil War game using the Pikeman's Lament 'big battle' rules (the 'big battle' variant being no figure removal and multi-based figures).  Andy even got to get his ECW cavalry on a table for the first time! 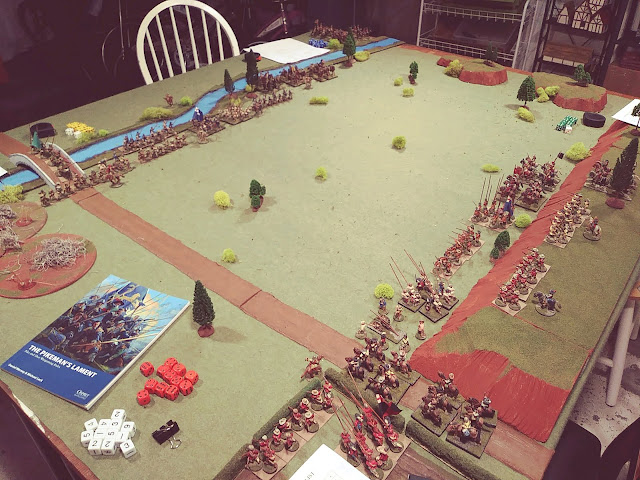 (Above: starting positions - Parliament is at the river, Royalists at the ridge)

There were 52 points per side, with 12 points of Parliament cavalry coming on table on turn six (the foraging cavalry returning, as per the historical battle).  Kept all the stat blocks at vanilla levels - no elite or raw troops or even wild charge for the gallopers. 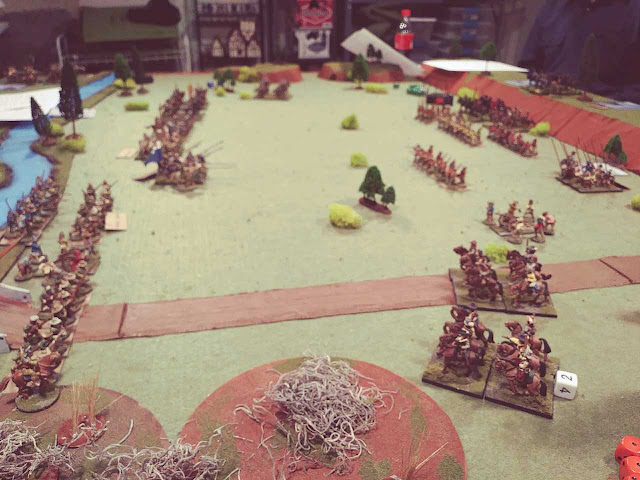 Unfortunately I messed up the unit stat blocks on my game handouts, and Parliament cavalry ended up with overstated attack values and understated defense values.  We caught and fixed the attack values early on, but failed to catch the defense value misprint until after the game was over - so major boo boo on me there. 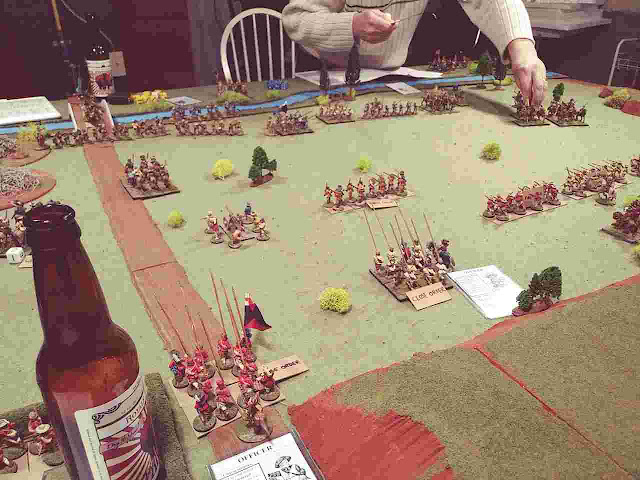 (Above: Pete advancing Parliament cavalry, while at below right the Royalists enjoy a tasty Portland-brewed beverage)

Otherwise the game was good and fast-paced.  We played to a reasonable conclusion in just two hours! 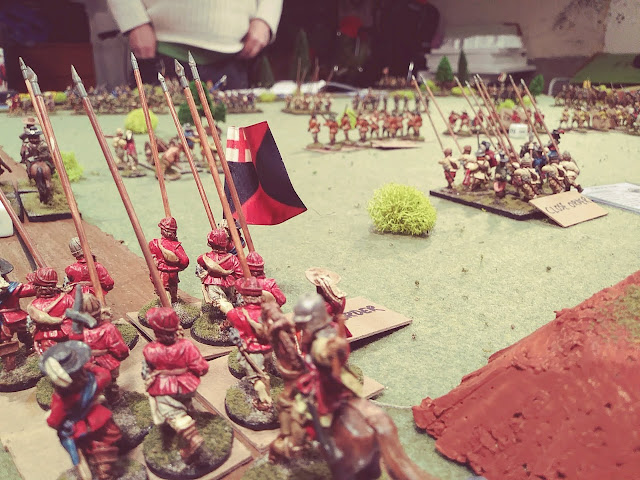 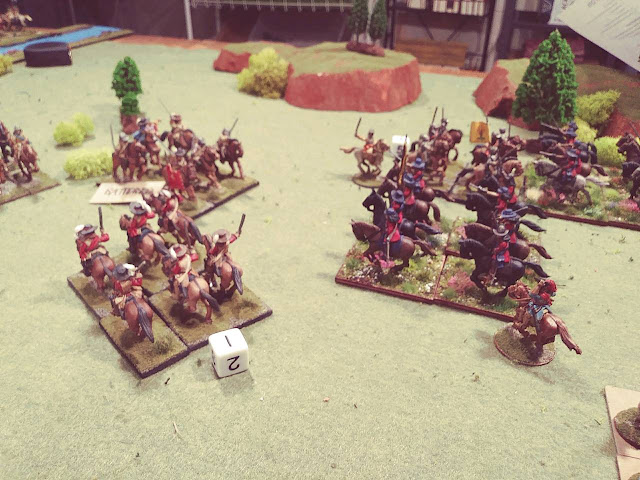 (Above: Royalist and Parliamentarian cavalry clash. The lisping cavaliers with the red jackets and blue hats are Andy's) 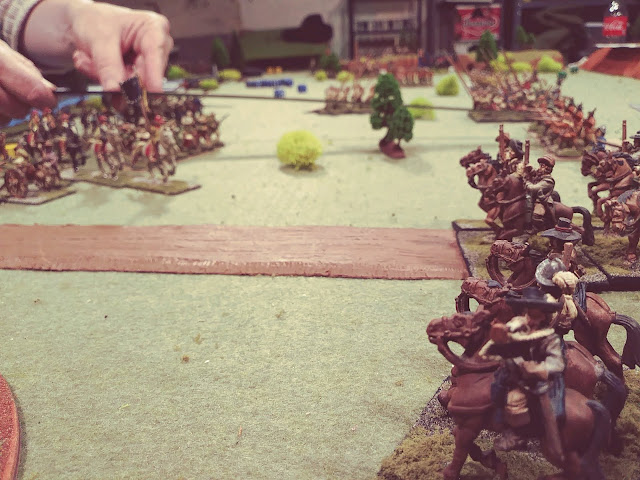 (Above: the final turns of the game. The Parliamentarian cavalry companies have been effectively destroyed, so the infantry, aided by some reinforcements (Pete rolled double 6s on an activation) try to see if they can make headway)

Next time I'll proof-read my stat-blocks!

Posted by Portland Little Wars at 7:30 AM No comments: Links to this post

More art history for reference.  That particular shade of yellow is very prevalent! Landsknect clothing entirely in white as well. Some of these are period tapestries which is interesting, since that means the colors are the colors of thread or fabric available. 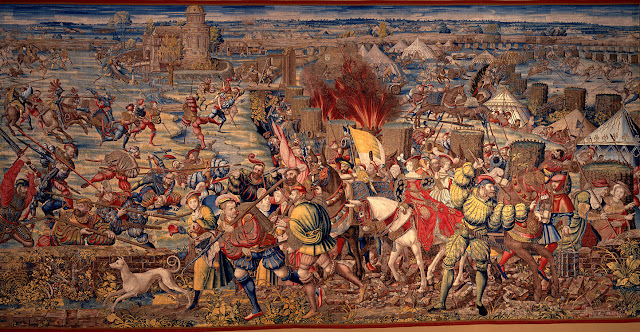 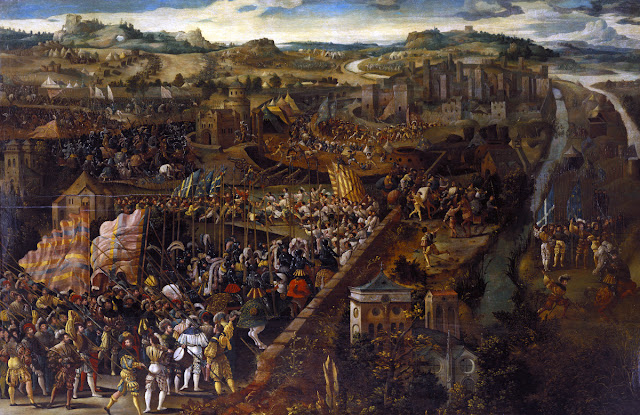 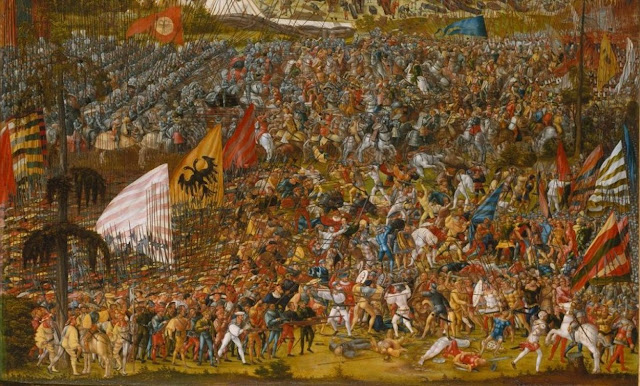 Not seeing a lot of the arms or legs with stripes... 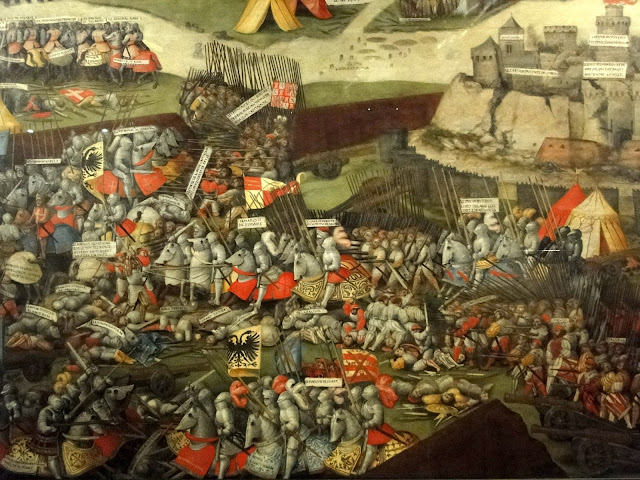 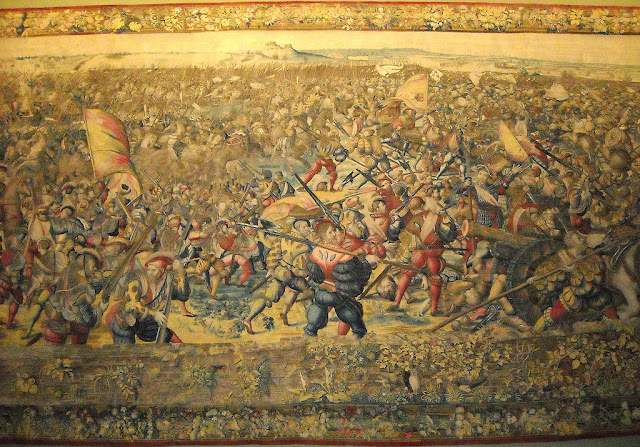 Off-red and blue a lot throughout these, but yellow seems to be the big winner.
Posted by Portland Little Wars at 4:53 PM 1 comment: Links to this post