I made some excellent progress in researching lesser known English Civil War "battles" (scare quotes because some only involved 1,000 men per side). Thankfully, many are simple affairs, with both sides facing the other across an open field or green, so no need for specialized terrain.  One such event was a hard-fought battle at Muster Green in December of 1642, in Sussex near Hayward's Heath.  This battle was the farthest point south of London reached by a Royalist army for the duration of the civil wars, and was fought between a larger Royalist army (commanded by the High Sheriff of Sussex, Edward Ford, who had offered the King to "undertake the conquest of Sussex" with 1,000 men) mostly comprised of conscripted infantry, and a smaller but more determined Parliament force under Colonel Herbert Morley.  Neither side possessed cannon of any kind. 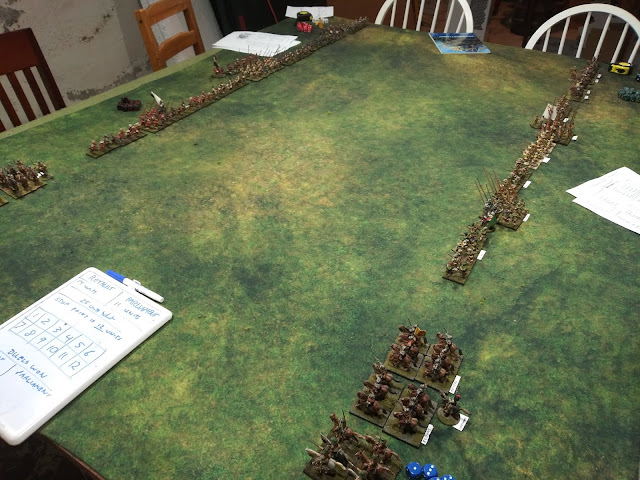 (Above: starting positions. Royalists on left and Parliament at right)

To simulate the "smaller but more determined" Parliament forces, I gave the Royalists more infantry but classed all of it as "Trained Band" pike and shot (increased difficulty to move, poorer starting morale of 5+) and based the Parliament foot on my London Trained Bands unit profile (same difficulty moving but a very strong starting morale of 3+).  Cavalry was evenly matched. The Parliament right flank also received some dragoons. 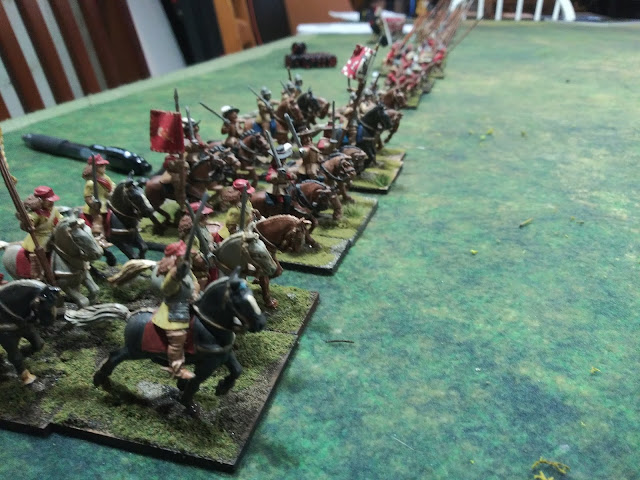 We had three players, so made do with a smaller command of just two shotte and one pike on the Royalist left flank (Col. Hawker's men), and Nathan took the rest of the Royalist forces and Jesse the entirety of Parliament. 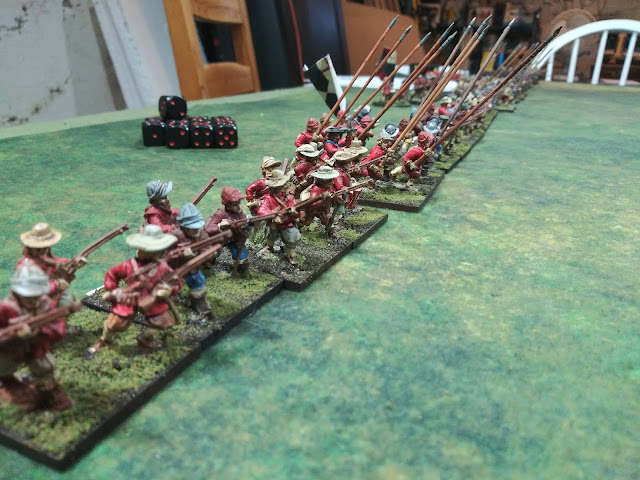 Parliament was unfortunate dealt a terrible blow early in the game when Royalist shot laid out 5 casualties in a dreadful volley to a Parliament shot unit, which, combined with a bad dice roll, caused the unit to leave the field. Give the numerical superiority of the Royalist foot, this made a Parliament victory a considerably steeper climb. 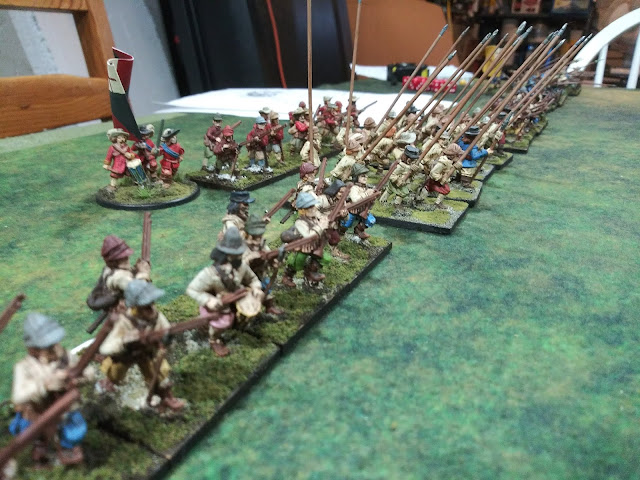 The rest played out rather as I expected - the Royalist forces mostly struggled against the poor quality of their troops while a cavalry clash played out on the flank (with the Parliamentarians emerging victorious). 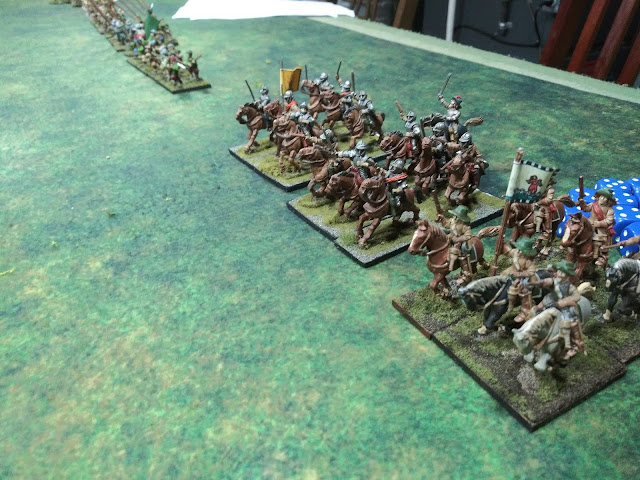 However, the Royalists perhaps wasted too many resources trying to shoot at the Royalist pikes (stamina 3) rather than the fragile shot units (stamina 2), and before you knew it, it looked like a Royalist conquest of Sussex would be a reality! 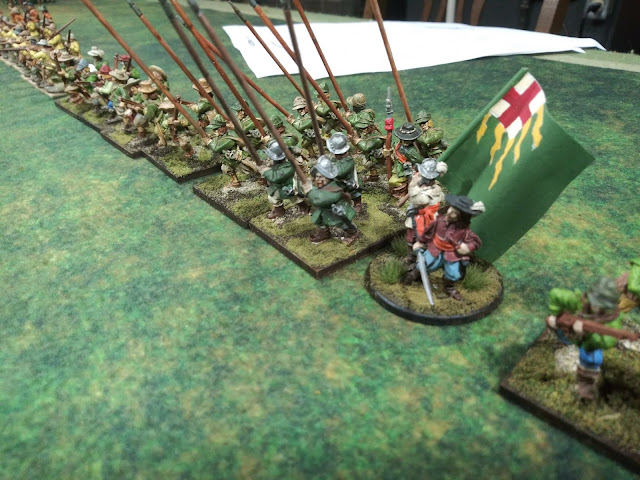 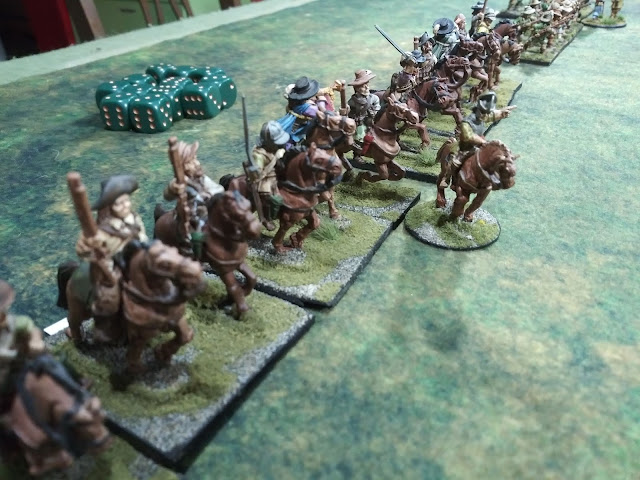 However, I had written the victory conditions to include bonus points for winning duels, so the Royalist officers, with nothing to lose, began to seek out their Parliament counterparts.  Over the course of four duels in two turns, all three of the remaining Parliament officers were slain in turn (the fourth had left the field when his unit was broken earlier)! 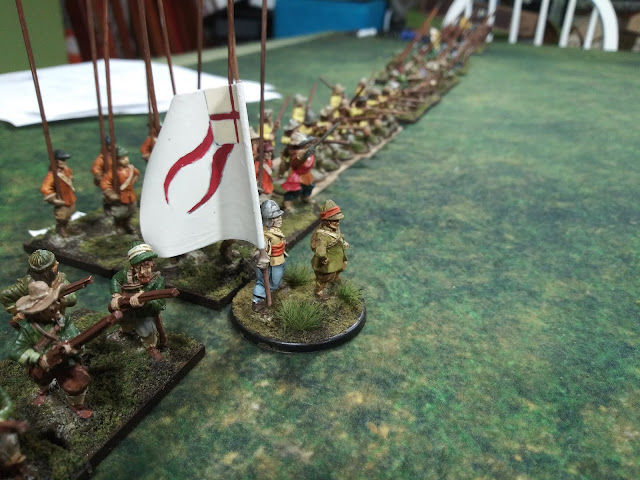 So, as a tenth unit was removed from the table, ending the game, the points were tallied - 2 points to the Royalists for having more units on the opposite half of the table than Parliament, plus 2 points for destroying/routing more units, for 4 points total.  However, the Royalists snagged 3 points for won duels, and a bonus point for have more officers left on the table at the end of game, for 4 points total. 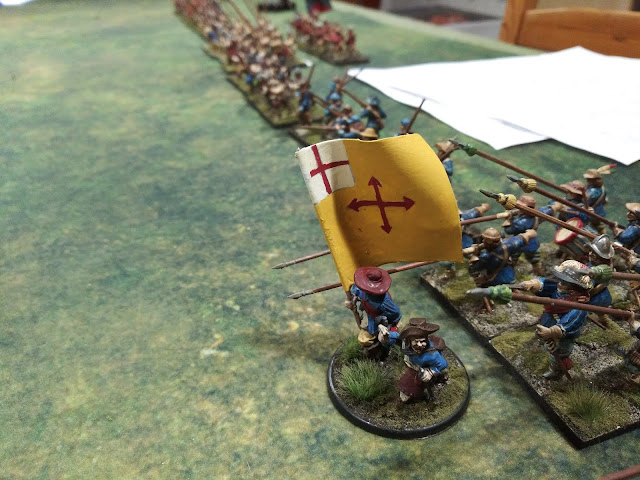 So... a DRAW!  However, we figured it would be a strategic victory for Parliament, as the Royalist conscripts, seeing the lack of officers, would probably desert over the course of the evening, leaving the remains of the Parliament army (which presumably withdrew in good order with its surviving officer in charge) in command of Sussex. Huzzah! 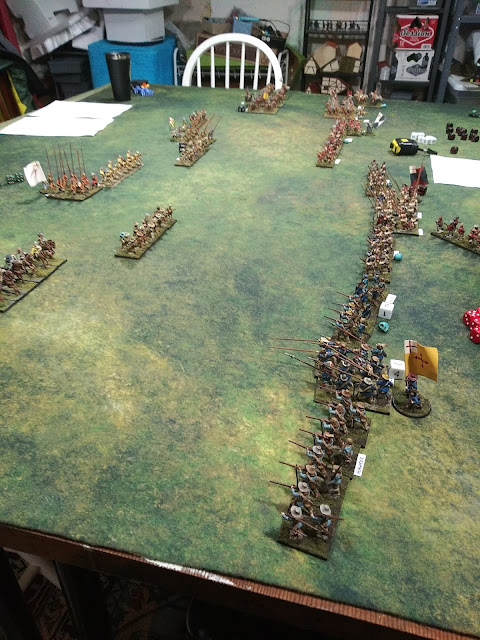