Last Saturday evening we played a scenario I set-up for the battle of Novara (1513) fought between a French army under the general Louis II de la Trémoille (who was present at Fornovo(!) and Agnadello(!!), and later killed at Pavia in 1525) and an army of Swiss mercenaries under the Duke of Milan Maximilian Sforza (based again on a scenario presented in Peter Sides' Renaissance Battles 1494-1700 Vol. 1).  The historical context is that in December of 1512, the French were successfully dislodged from Milan, and Swiss mercenaries installed Sforza as Duke thereof.  The following spring the French returned to re-take Milan.  The Swiss executed a forced march overnight and surprised the French encamped at Trecate, a village 2 miles east from the town of Novara, 31 miles west of Milan. The Swiss pikes scattered the French stradiot light cavalry and disorganized Gascon and Navarre crossbow troops, and handily defeated the landsknecht pikes.  Trémoille's gendarmes spent the battle fruitlessly pursuing Swiss skirmishers.  I recall reading somewhere that a contemporary called it the "perfect Swiss victory."

The set-up is therefore the village of Trecate in the center with several French gendarme units within.  The French left consists of stradiots.  To the French center, to the right of the village, are two units of crossbowmen.  The French line is then divided by woods.  On the far right are landsknecht pikes and medium guns. Opposite the landsknechts and crossbows are the largest concentration of Swiss pikes, halberds, and light guns.  Opposite the village are several units of Swiss skirmishers, and opposite the stradiots are two units of Milanese mounted men at arms and a single block of Swiss pike. 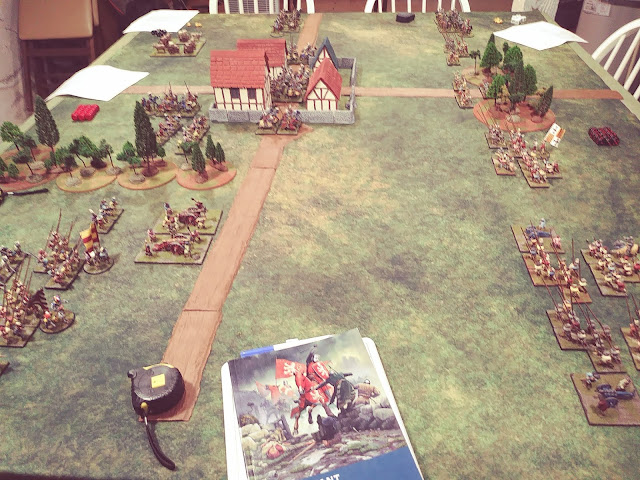 (Above: starting positions - French on left, Swiss on right) 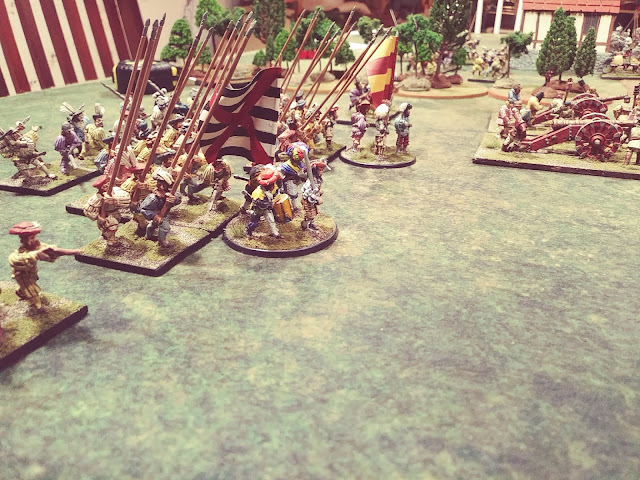 (Above: Landsknechts in French service) 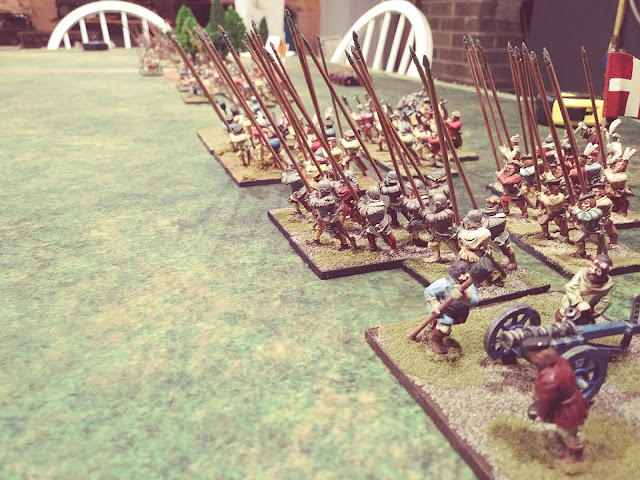 (Above: The main Swiss pike block on the Milanese left) 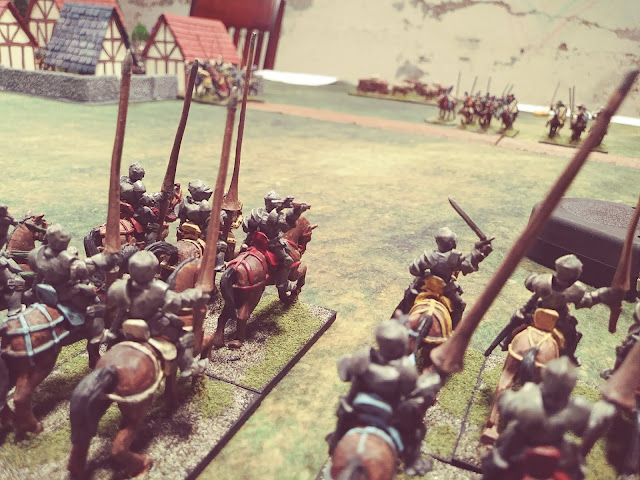 This was the first game using a lot of additional new rules and unit profiles sent to me by Stuart at Army Royal.  Stuart's very informative research (as well as his friend Oli's research as Camisado) were very helpful when I was painting my armies earlier this year. I am happy to say their research has produced some excellent rule modifications that I felt really captured the feel of Italian Wars battles.  Of particular interest to me was the simple change of having all infantry move 8" instead of mostly moving 6".  This change has the effect of bringing the foot into melee range much faster than before, especially the pikes which had a tendency in my previous games to lag behind and not really be involved in the game at all.  The real big change, however, was the unit profile for Swiss pikes! 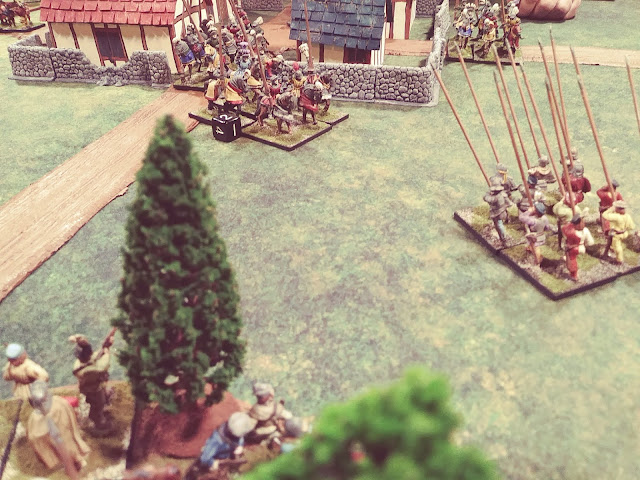 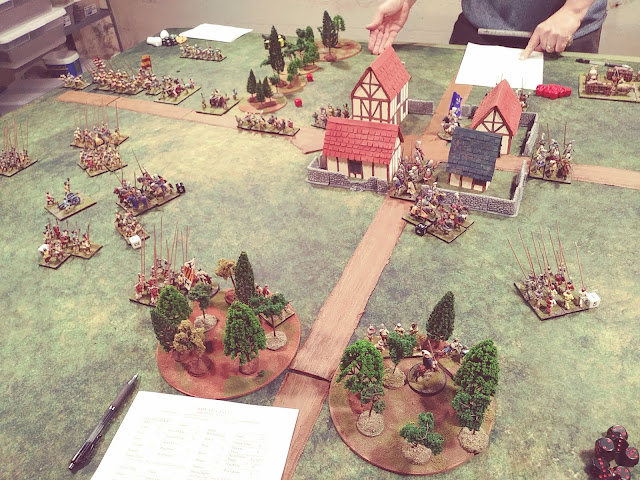 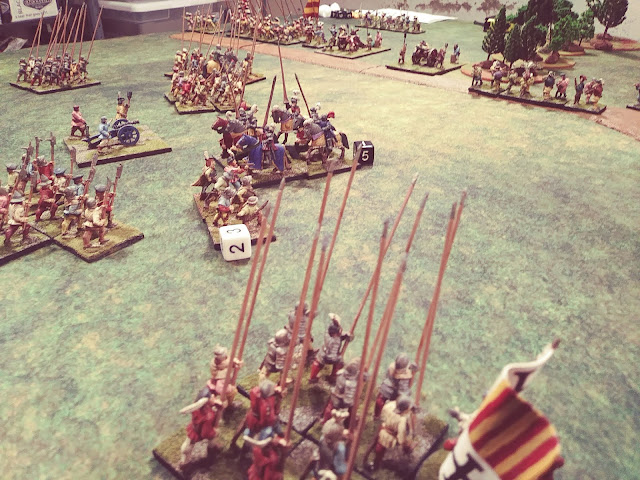 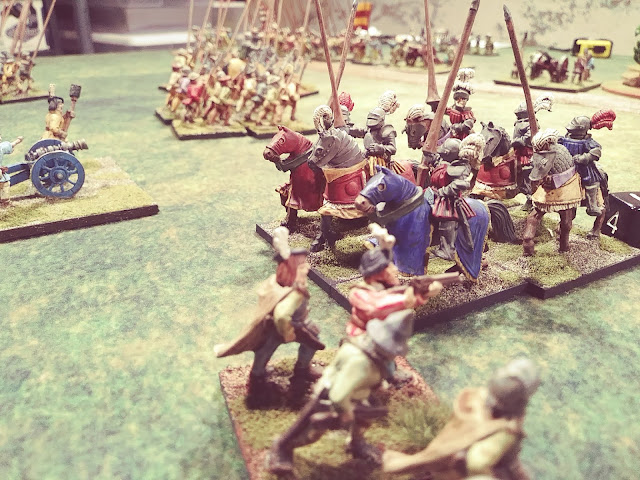 (Above: French gendarmes sortie against the Swiss center)

Stuart and Oli have added a simple 'Ferocious Charge' rule to Swiss pikemen and halberdiers which allows them to re-roll missed attack rolls when they are the attacking or counter-charging unit (the counter-charge applies only to the halberds).  This led to Pete dubbing the Swiss pikes "murder blocks".  What's great about this rule is it imbues the Swiss units with the highly aggressive attitude which I have read about, tried to re-create, but never seen on a tabletop.  As the player, it was clearly to my advantage to get the Swiss infantry up and into melee as quickly as possible, even if not in close order! 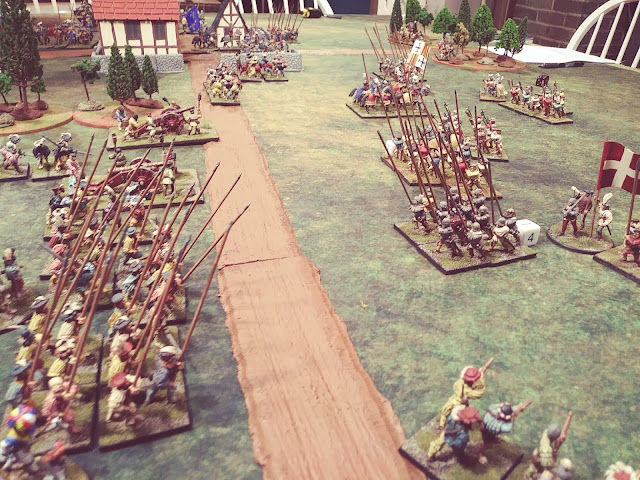 (Above: the main body of the Swiss close in on the landsknechts) 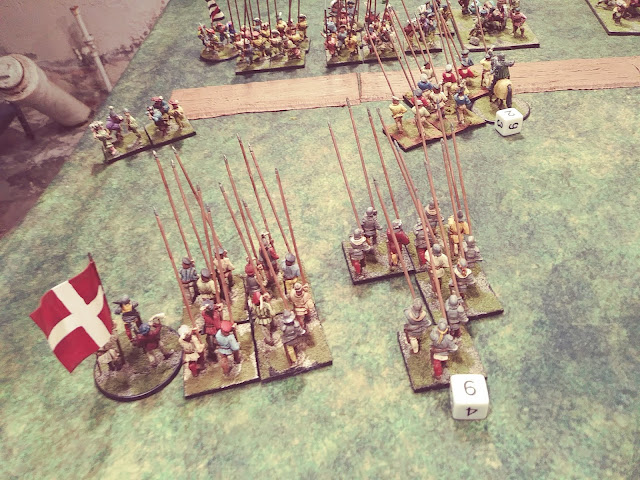 Conversely, the French, in order to counter the Swiss offensive punch, played historically accurate as well, leaning heavy on their artillery and heavy cavalry (gendarmes) as a counter to the Swiss superiority in infantry.  Pete stayed in line and hammered away with his cannon, arquebuses, and crossbows, and stradiot light cavalry, whittling the Swiss down casualty by casualty.  In a key phase, several Swiss pike units where at last in striking range of the French infantry, but I then managed to fail the command throw for all of the relevant officers, and the closing charges simply did not happen.  Pete's officers then made their activations and laid out another dose of close-range fire (the modified rules have a bonus to black-powder weapons at 6" or less), and the Swiss either took heavy casualties or fell back in confusion. 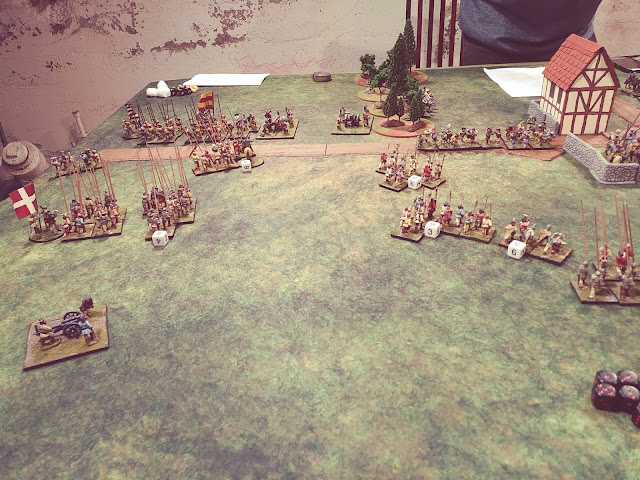 (Above: the situation after the Swiss advance stalled - casualty markers everywhere)

In just one turn the game turned from the striking of a mighty punch by the Swiss to a line of heavily damaged units teetering on the edge of defeat! 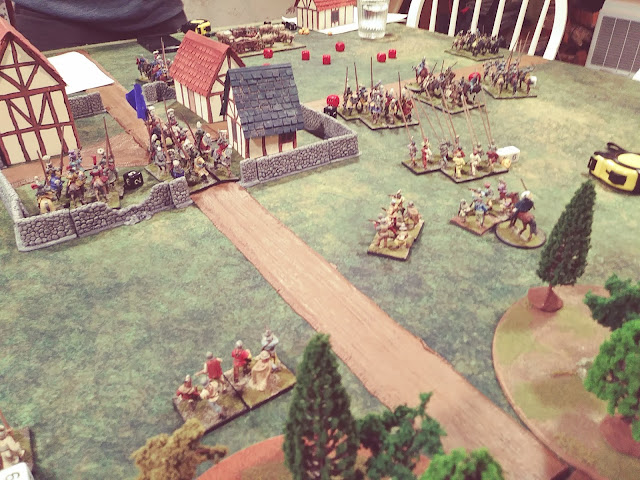 So, alas, no "perfect Swiss victory" this time.