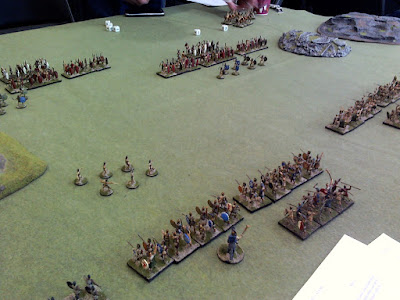 Since this is a Carthage vs. Rome game, using armies in the style of the second Punic War, but not one of Hannibal's famous battles in Italy, it must therefore be one of the lesser known contests in Iberia (present day Spain) in the years 212 to 207 BC, right? Right!

This is a  four-player game with each player controlling two divisions (one infantry, the other cavalry or elephants and skirmishers).  Carthage and its allies/mercenaries had native Iberian medium infantry on its right with Celtic cavalry on its far right flank and elephants in the middle, Carthage's right was Libyan heavy infantry with Numidan light horse on far left flank. 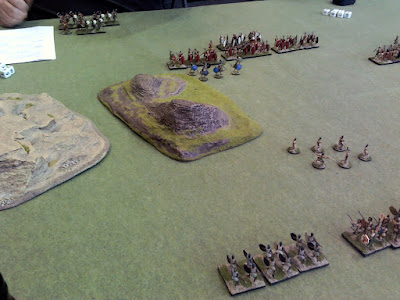 The Romans were less varied (as they are) with infantry divisions in the middle and Roman or Italian cavalry out on the wings.

In a nutshell, the Carthage left and its opposing Roman right both failed to advance in a systematic way, while in the meantime the Iberians raced out in a head-long attack on the Roman left.
Given that the Iberians are medium infantry and the Romans are crack heavy infantry with boosted support values this should have been a rather futile assault.  But the Iberian dice were fortunate and the Roman dice not so much and the result was what ancient historians call "great slaughter." 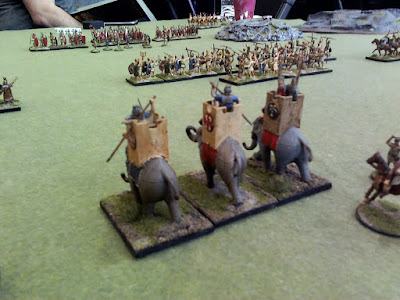 "Great slaughter" and great many complicated rules situations with units ending up behind each other and flanking each other and just a big bad scrum and by the way just before the elephants finally got close enough to attack the entire Roman left broke and ran. 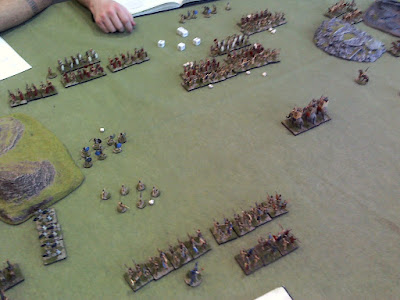 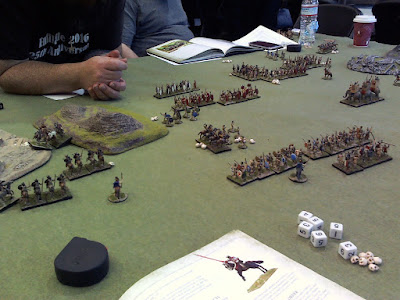 The aforementioned Carthage left and its opposing Roman right played out the string which saw the Roman cavalry collapse which triggered Roman army collapse. 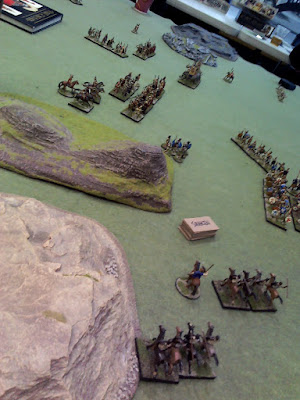 But hey we didn't screw up any rules too bad although there had to be a lot of double checking.  These armies will be on a tabletop again soon!

Here are the army lists used if you care for such things...

Posted by Portland Little Wars at 6:58 AM No comments:

Four years ago I built up and painted opposing Roman and Carthaginian Punic War armies in 20mm plastics (all by HAT Industrie).  However, I was subsequently plagued by indecision as to a ruleset and a basing system to use for them, so they mostly sat, fully painted, in boxes in the basement.  The initial idea was to use Warlord Games' Hail Caesar! rules, and I even acquired the book and the first volume of army lists for this purpose. Some version of DBA was also a candidate, and likewise I purchase the most recent version of those rules.  Subsequently having actually played DBA 3.0 a few times last year I can say I don't particularly care those rules.
More recently, an artists' supply store opened in walking distance of my house and aside from easy access to brushes and painting supplies they also carry brass rod (spears! pikes!) and basswood sheets in various widths, both very reasonably priced. Armed with my trusty razor saw, I can now base any army on 3mm wood bases very inexpensively.  Now both Roman and Carthaginian armies are fully based on 20mm wide bases (yeah the cavalry and elephants should be on slightly wider bases but whatever) and ready to rock!  Don't look too closely at them, because they are very much the product of my painting process from four years ago!
Coming to a tabletop soon! 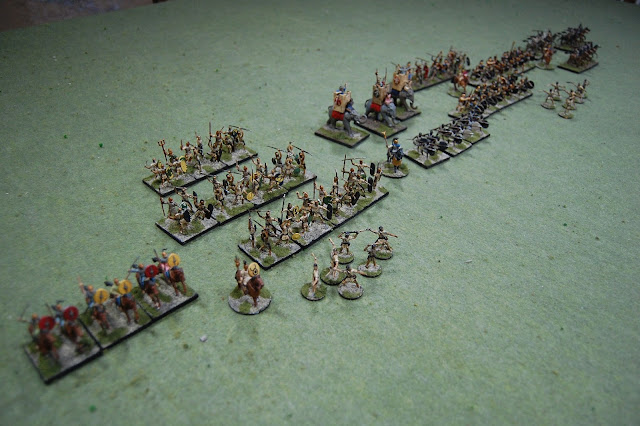 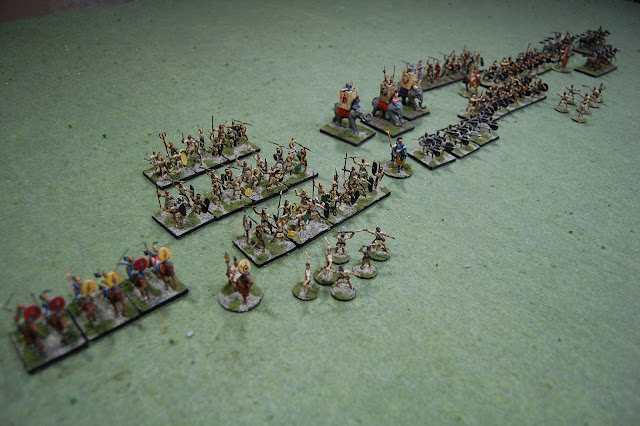 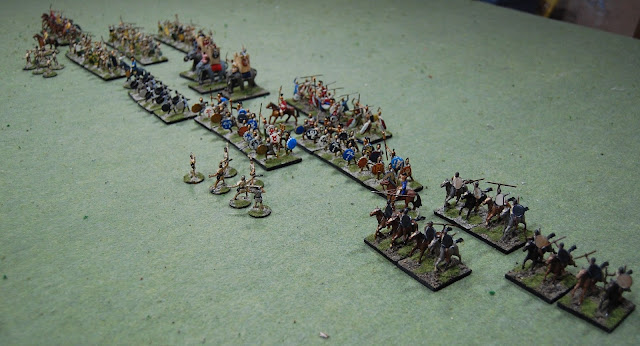 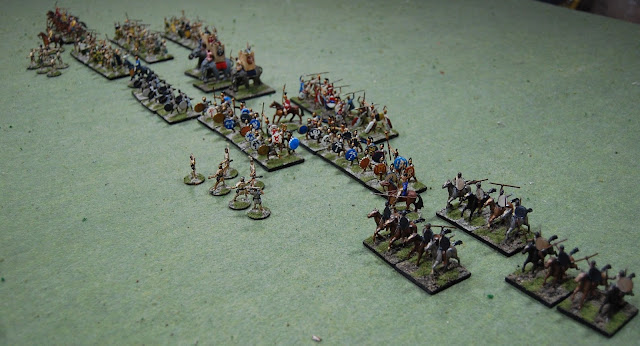 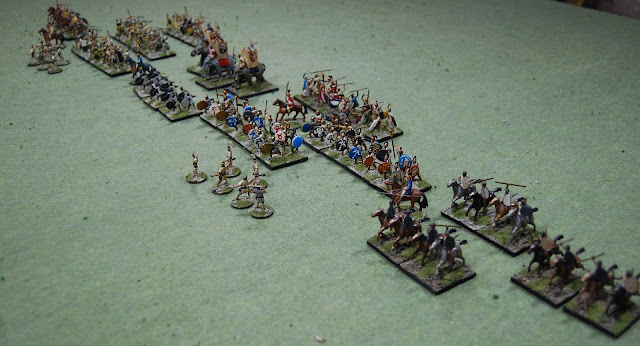 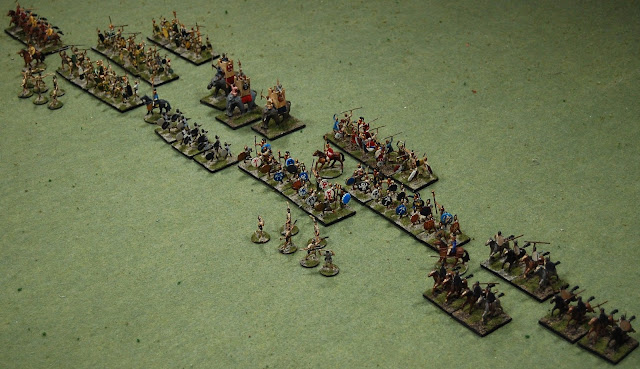 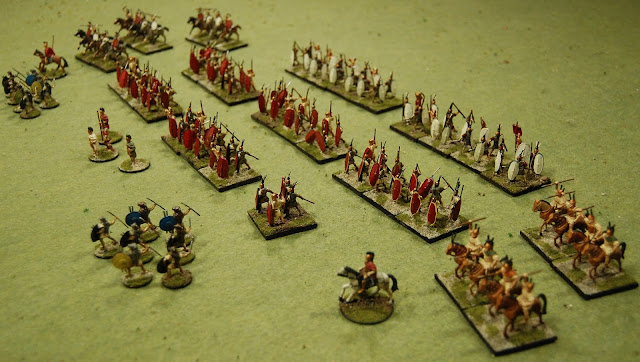 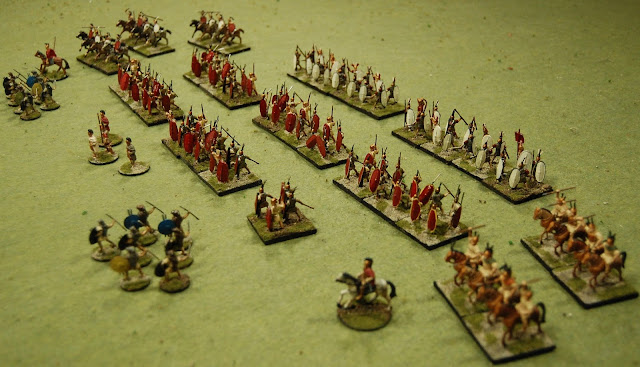 Posted by Portland Little Wars at 6:30 AM No comments: