The last game of 2014. Kyle brought his Anglo-Dane warband over and mixed it up against my Anglo-Danes. Kyles figures are all Grippig Beast, I think. 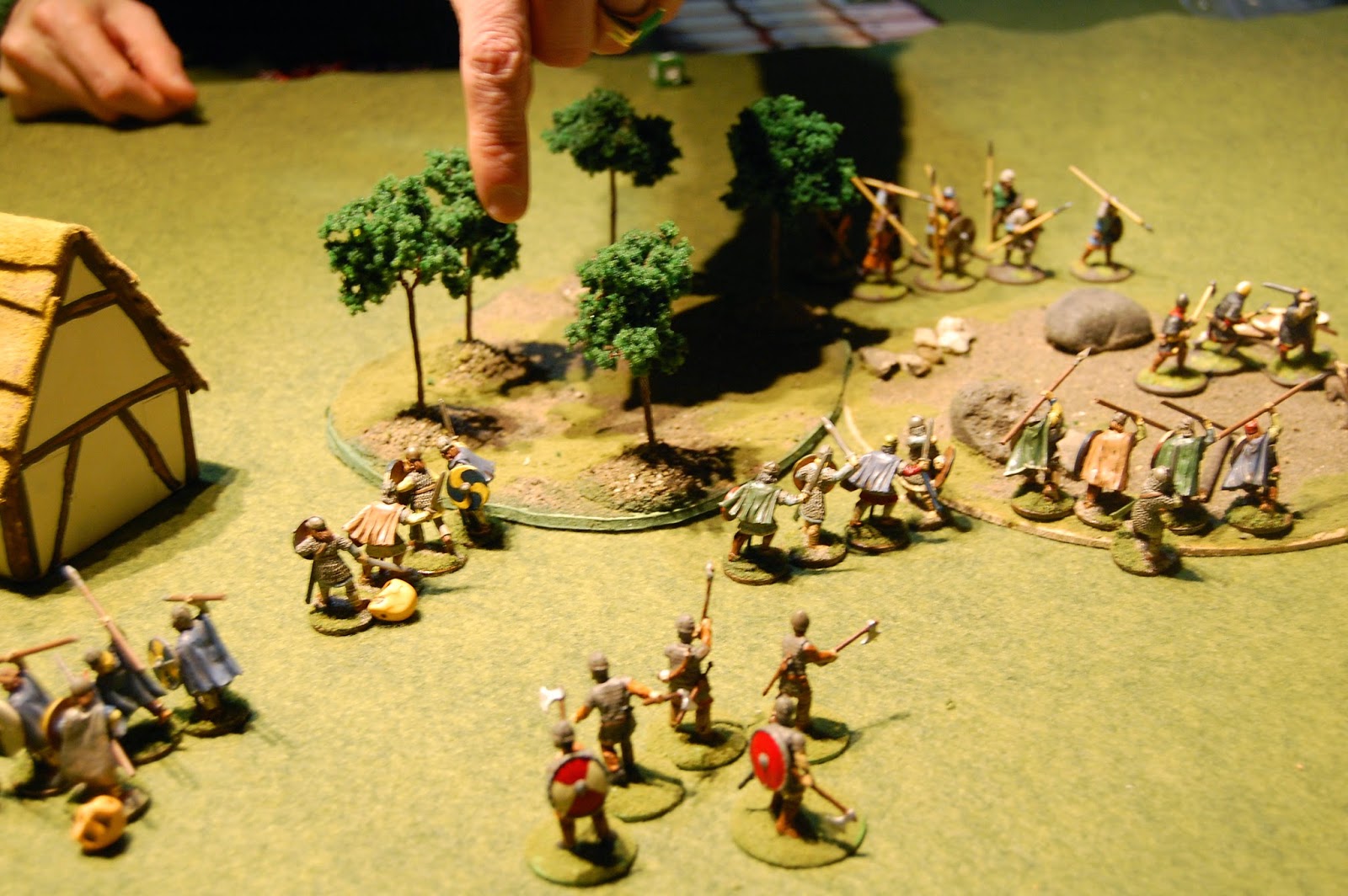 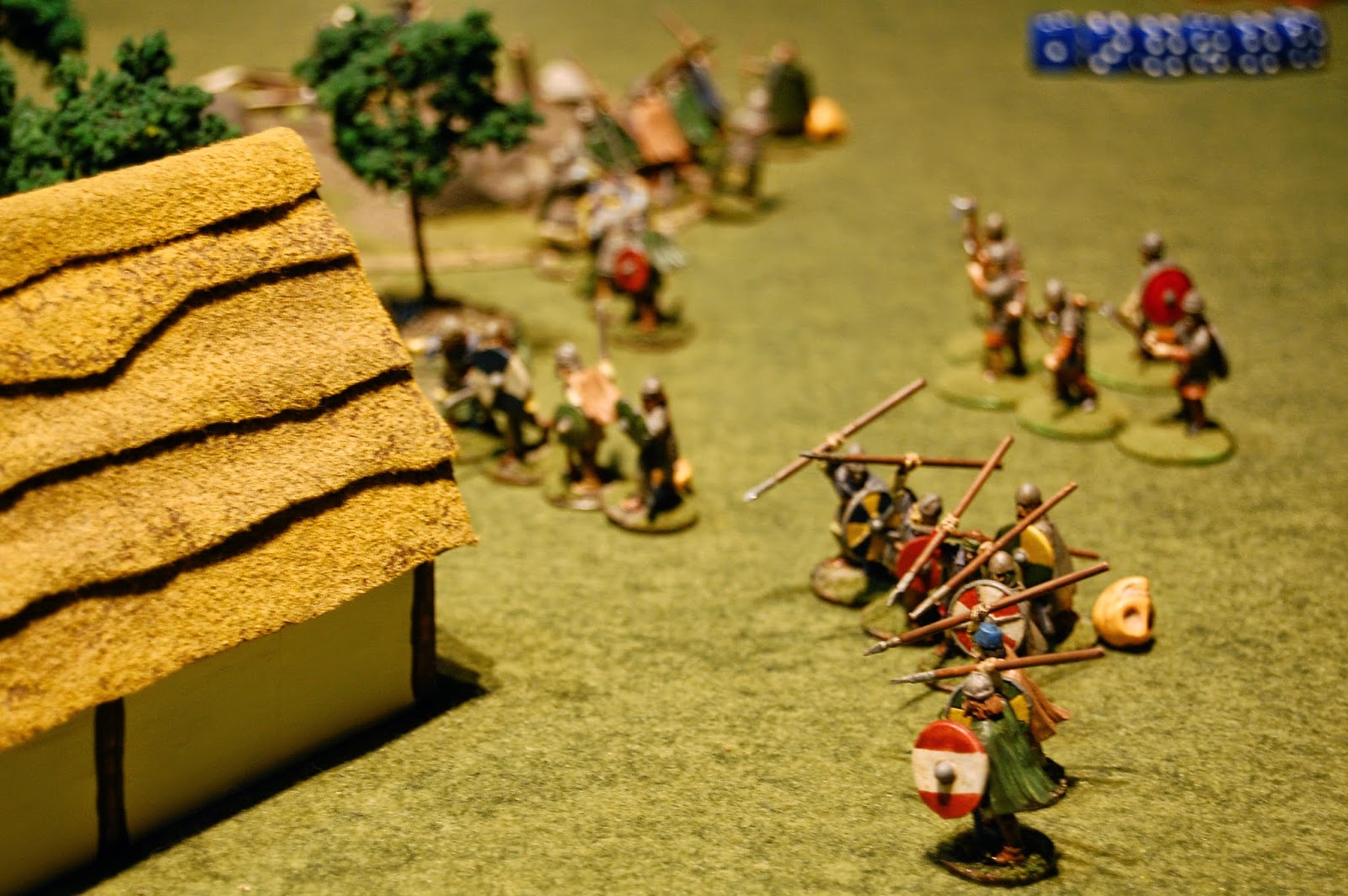 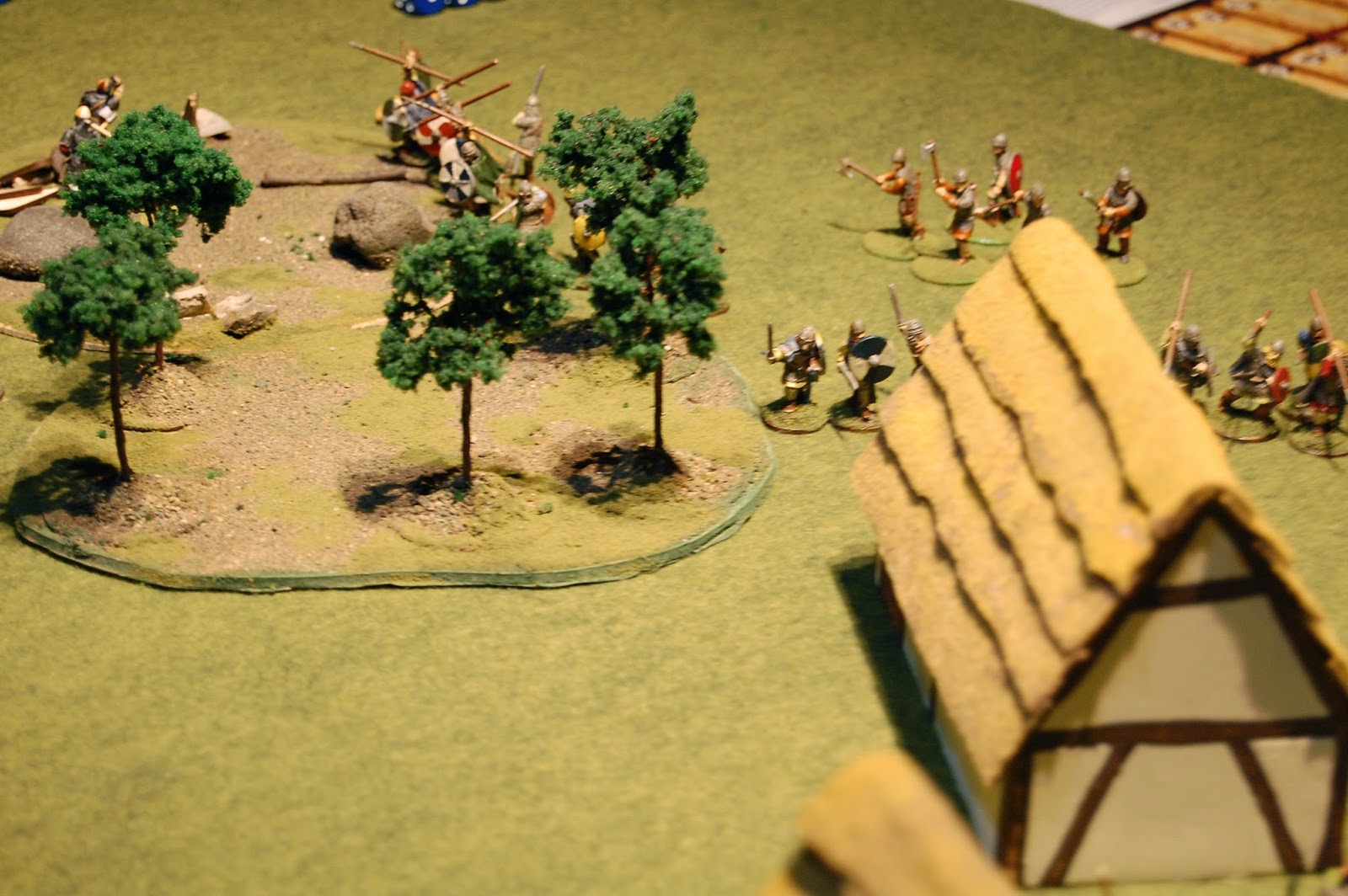 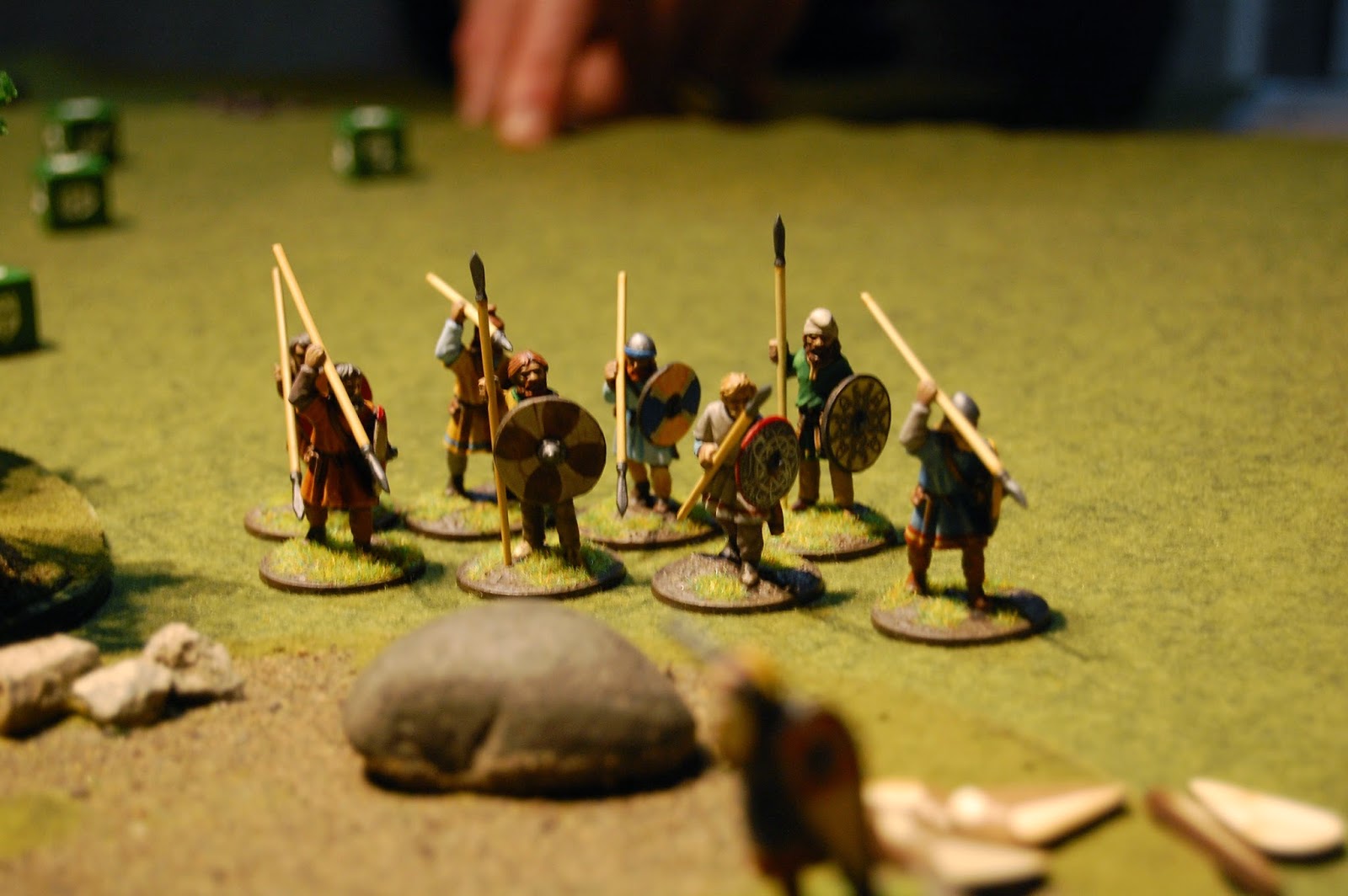 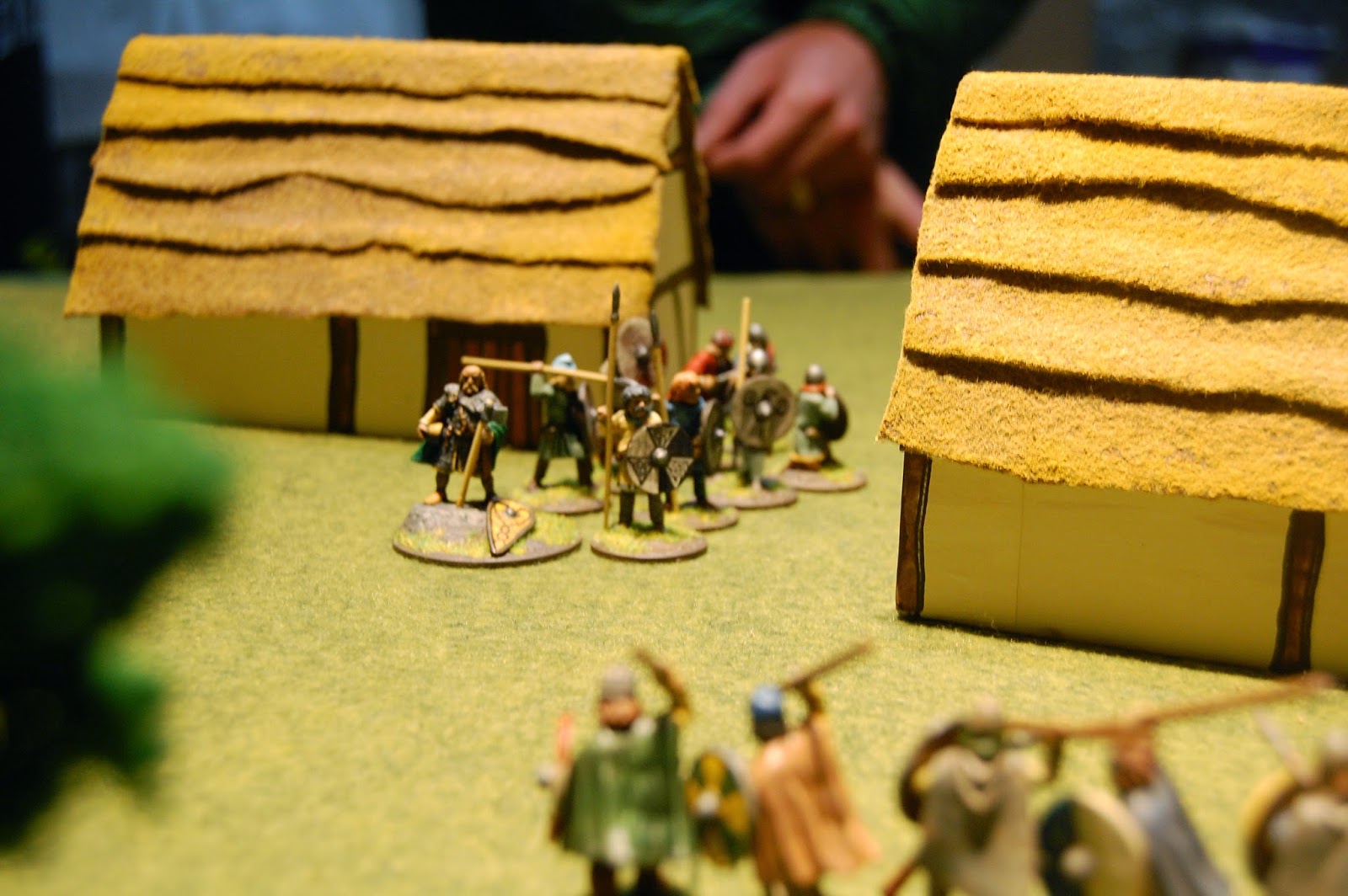 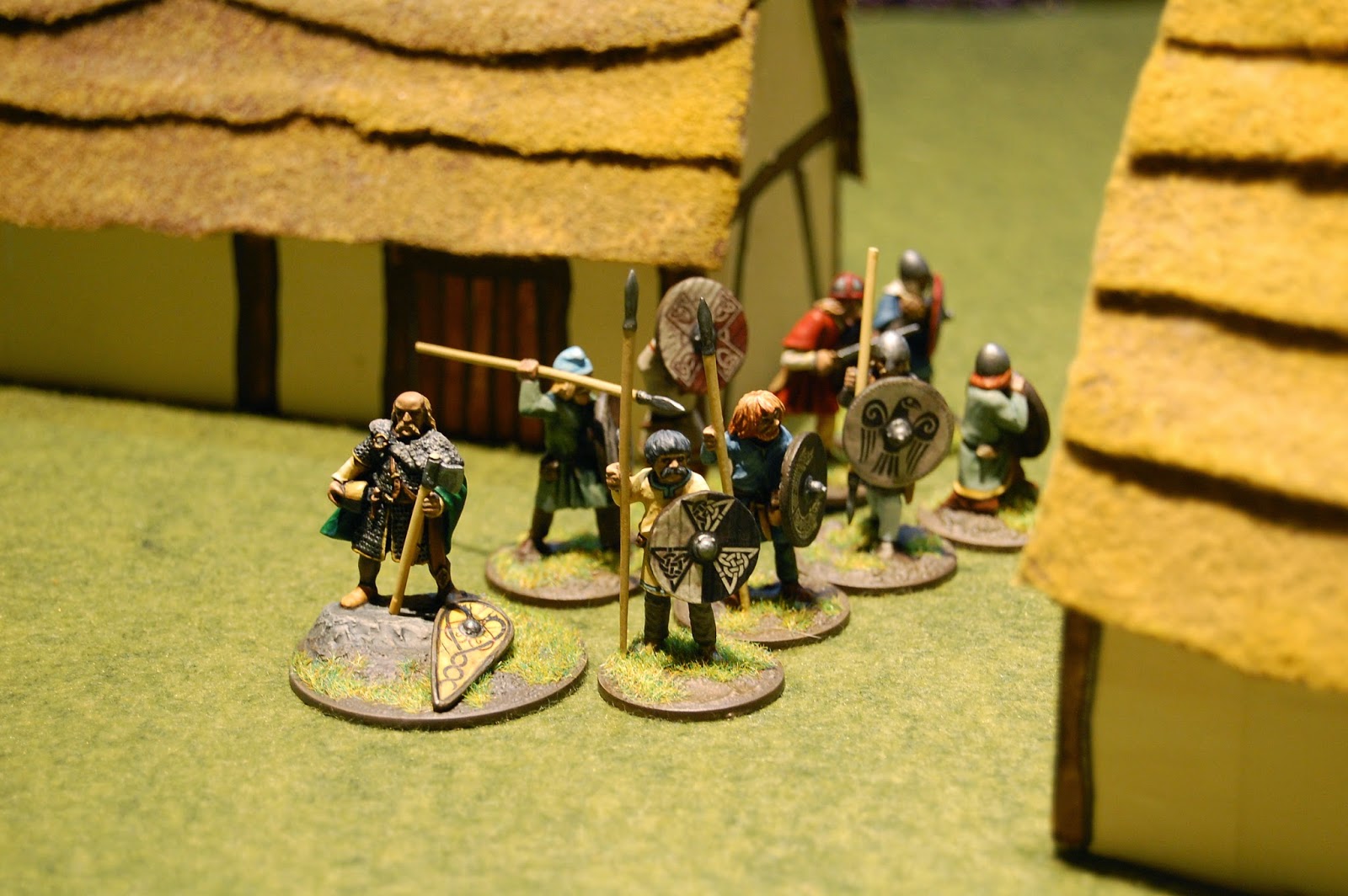 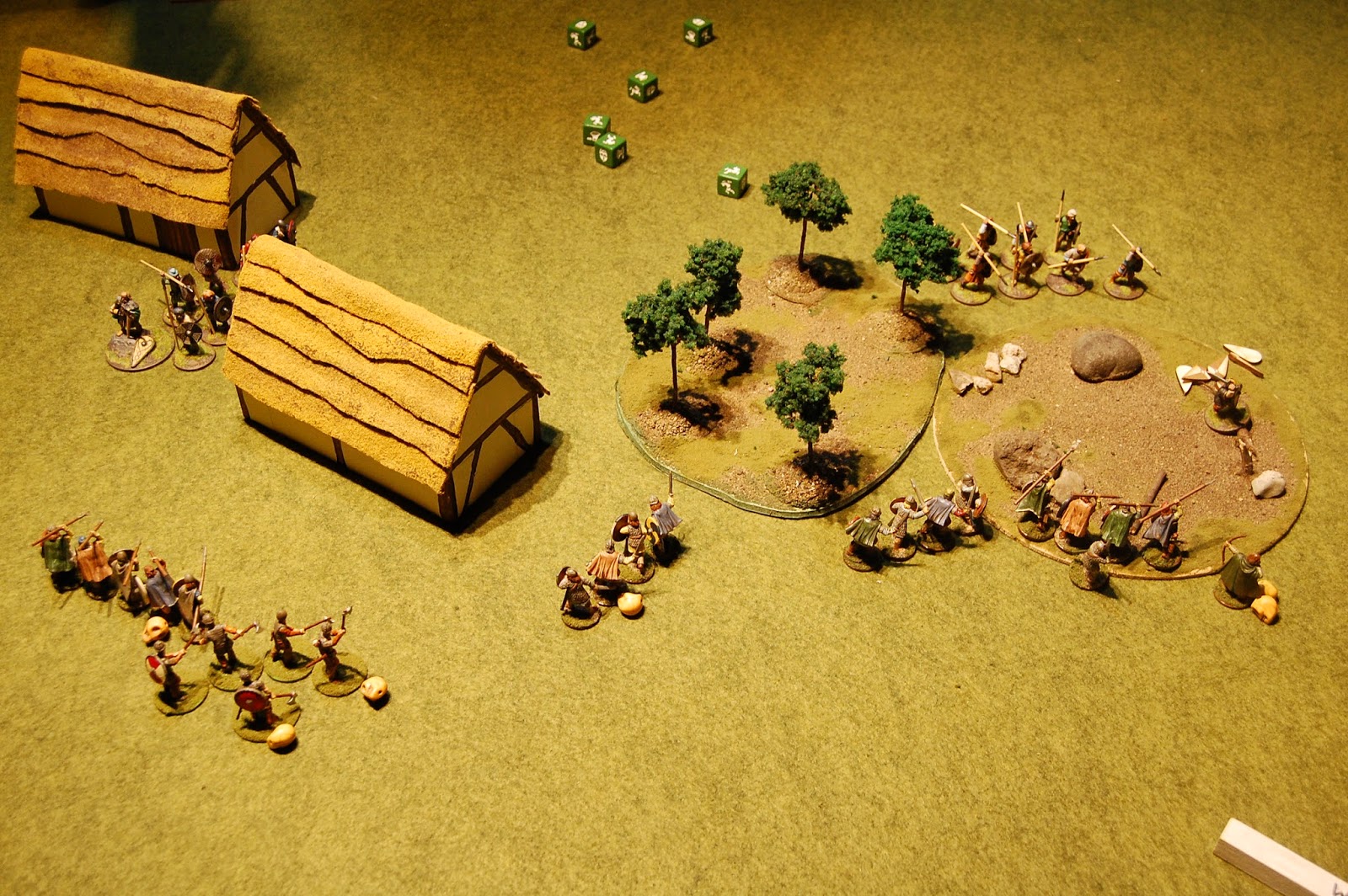 Kyle won.﻿
Posted by Portland Little Wars at 6:59 AM No comments: Links to this post

Battle to Be Joined!


After over a year in the making, we'll finally be wargaming in the 1640s come Friday night. The rules will be Pike & Shotte and I am supplying both Parliament and Royalist armies (consisting of Old Glory, Warlord Games, and old Garrison figures). T'will be a smallish affair since much plodding rule checking is to be expected. Unsure at this juncture whether I'll get to talk like a lisping Cavalier or not...


Crafting this to be an engagement in the 'early war' style (c.1642). Royalists have cavalry that is reckless but adequately led (many royalist commanders fought with the Swedes in the 30 Years War), Parliament has cautious cavalry but poorly led (older commanders using out-dated tactics). Both sides have many raw recruits.


Each side gets the following units and special rules.


One 'battalia of horse' consisting of 3 units cavalry (6 figs each) with a commander (rating 8 for royalist, rating 7 for parliament). All cavalry (both sides) get the 'marauder' rule (see below for quick summary of special rules noted).
One 'battalia of foot' consisting of 2 units musketeers (8 figs each) and 1 unit of pike (12 figs) with a commander (rating 8 both sides). All muskets (both sides) get 'first fire' and all pike get 'hedgehog' and 'pikes'.
One light cannon (a 'falconet') with crew to be attached to one of the two battalias.
Designate one commander as C-in-C and roll d6: 1: rating 7; 2-5: rating 8; 6: rating 9.


Special unit rules to be assigned.


Both sides must designate 2 units of their choice as having the 'freshly raised'. These represent raw recruits or conscripted troops.
Both sides must designate 2 units as 'steady'. These are better trained/inspired troops or troops with some experience.
Exclude the artillery unit from these assignations.
(Note: Out of six units, only three are 'normal' and not steady or freshly raised).


Dice for who is attacker/defender. Higher roll gets to pick. Defender then lays out 4-8 buildings or terrain pieces on 6'x6' table. Any stretch of continuous fence or hedgerow counts as one "piece" of terrain. Be sure to note any rules regarding any terrain.  Attacker then decides which board edge they will enter from.  Defender deploys gun and infantry on opposite side. Attacker deploys gun and infantry. Defender deploys cavalry  Attacker deploys cavalry. Attacker goes first.


When a battalia loses more than half its units (so two out of three) it hits its "break point" and begins moving off table (the artillery piece does not count for this calculation).  When one battalia breaks the whole army breaks. Play out one full turn after this because sometimes an army can pull off a draw via a "fighting retreat".  So each battalia can lose a unit and keep fighting no problem. This might make for a game that ends rather suddenly but if we factor in about an hour for set-up and actual figure movement/dice rolling, and an hour for rule comprehension I think this is a price we must pay.  My understanding is that games of P&S/HC/BP tend to consist of a 'first half' where both sides maneuver and make initial clashes and a 'second half' where the units get close enough to basically go on "autopilot" just slug it out. I'm hoping/predicting about a two-and-a-half-hour game set-up to conclusion. After this 'learning game' we could go again with more figures.