On Sunday we tried out a sort of 'big battle' or 'convention' variant of Lion Rampant.  Something Gabe and I have been chatting a lot about lately is trying to escape the 'Anglo-centric' orbit of a lot of wargaming – in this case it meant playing a dark ages type of game set in continental Europe and not in the British Isles.  This was pretty easy to do, since Gabe has managed to end up with a rather large collection Normans and Bretons, and the particular look of these models (nasal-helms, kite shields) is essentially universal to the European continent in the 10th and 11th centuries.

The purpose of this "try-out" game was for Gabe to get a good inventory of all his continental figures, as well as to try out some add-ons to the Lion Rampant rules which we felt would add more continental flavor, as well represent "big battles".  For my part, I am interested in (eventually) getting into some 13th century feudal armies (Frederick II, the Guelphs and Ghibellines and all that), and this game presented opportunity to get a feel for that kind of game.
After an inventory of all the available figures, the initial set-up involves 38 points per side, consisting of the following:
I contributed/substituted some dark ages Scots cavalry and some time-traveling Hussite crossbowmen to bring some units up to strength.
I deployed my army (which I declared to be that of the Count of Naples) in a historical manner, with a first line of all the infantry, a second line of the mounted sergeants, and a third line of my Milites. 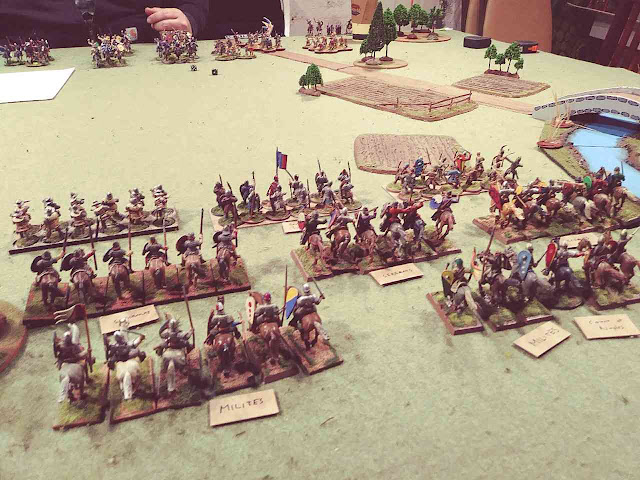 Gabe (playing the Norman Hautevilles) deployed his infantry to one flank his milites and sergeants to the other. 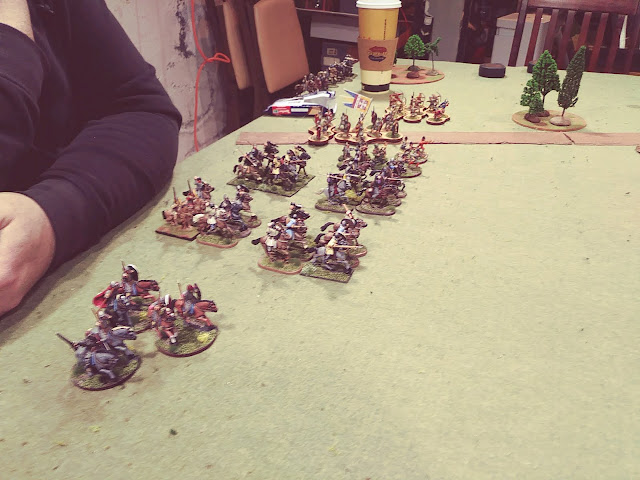 Our rule-modifications were as follows (mainly porting over select rules from Pikeman's Lament):
Scenario was loser would be first side to lose half its points worth of units.  38 points per side so magic number for both sides was 16.  The rub here was that the Milites, which are mounted men at arms with the Drilled rule (so no wild charge), are the most powerful units on the table, but also the most expensive (7 points vs. 4 of everything else) – losing even one Milites would bring your army almost half way to the breaking point!

(Above: look at those neat three lines advancing!)

With the +1 to activation rolls conferred by the leaders, both sides easily maneuvered forward.  I brought all three of my lines up neat and orderly.  Gabe incurred a few casualties on the first line with shooting and then attacked my crossbowmen with some Hautevilles mounted sergeants.  The crossbowmen lost the combat (3 casualties), but when they retreated back the sergeants in the second line were too close, and the crossbow lost 3 more as a result of not being to fall back in good order.  Then the foot sergeants in the center of the first line took some shooting damage (as a recall) and totally boffed the resulting courage check.  They fled the field (this a common occurrence for me!), and since the leader of the foot was in said unit, courage checks were incurred up and down the first line, and the Crossbows, being at -6 on such a check, also fled. The archers fell back in a Battered status.

(Above: hey, where'd that first line of infantry go?)

So just like that the entire first line completely cratered on me.  I tried to make lemonade from lemons and made it a bit interesting (mainly my Milites were able to get in and bloody up a few Hautevilles) but the archer unit repeatedly failed rally tests eventually it fled as well, which put me at 12 out of 16 points lost.  My final gambit was to have my leader's Milites attack the Hautevilles' leader's Milites and hope for a miracle. I did not get one.

Overall this was an entertaining and engaging game. The tactical decisions were interesting and fun, given that both sides were so cavalry-heavy, one had to constantly consider the long "reach" of those mounted units, which could easily cut horizontally across the field 10" and shift the emphasis of the game.  Some more foot sergeants would definitely enhance future games, to create a sort of anchor for each side.  As noted elsewhere, the use of a small dry-erase scoreboard, to keep track of how close exactly each side was to its breaking point, really clarifies and focuses the game (you can use the same thing for Hail Caesar, Black Powder etc.), and I highly recommend trying one out the next time you play Pikeman's Lament or Lion Rampant.
Posted by Portland Little Wars at 12:06 PM 2 comments: Links to this post