Charge! Or How to Play Wargames

A fast evening game of Charge! Or How to Play Wargames was played on a 3'x4' field on the living room using 54mm plastic figures.  These are my 'freelance Napoleonic project' figures, and are not painted to any specific units or nationalities.  I meant to throw together some background story with my oppoent (age 7) but forgot. 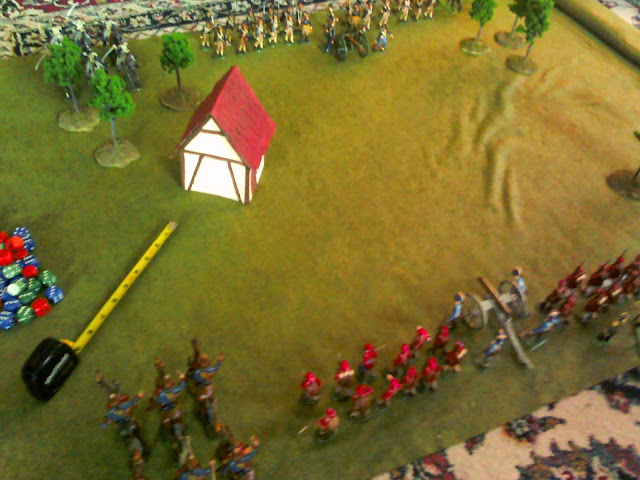 Both sides were compositionally identical: 24 infantry, a cannon with 4 crew, 6 cavalry, and 2 officers. 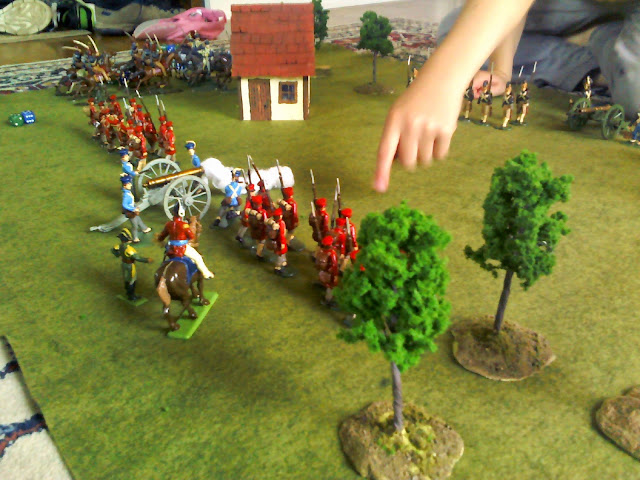 The Charge!rules are wonderfully simple: the entire 'elementary' game rules are summarized on two pages!  They are also good simulation rules, both in terms of the effect of musketry and the back and forth of cavalry melee. Both sides began trundling forward.  Army Red's (me) artillery fire was spot on and Army Black took dreadful casualties as they advanced. 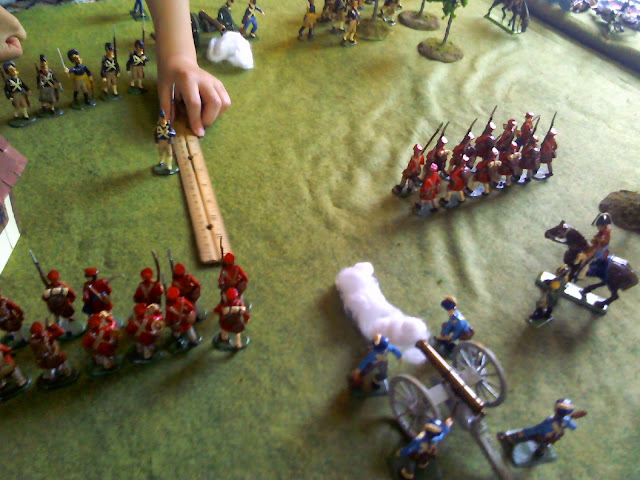 No pictures but there was a swirling melee to the left between the cavalry. 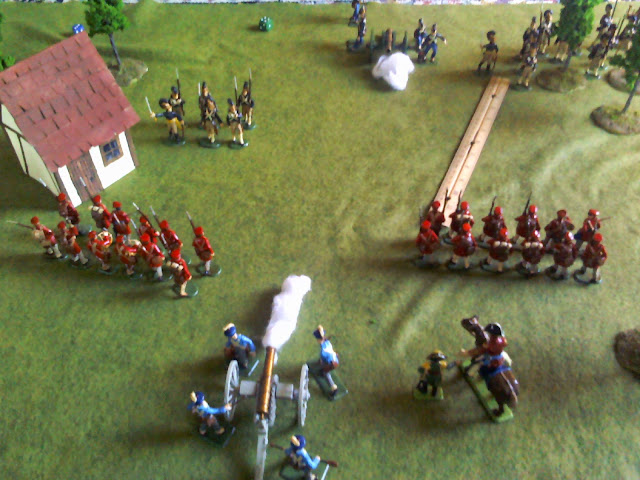 Infantry finally close in and the musketry fire commences. Army Black begins to chip away at Army Red.  The break point is first to loose 19 figures. Things get down the wire: Red has lost 18, Black has lost 17. 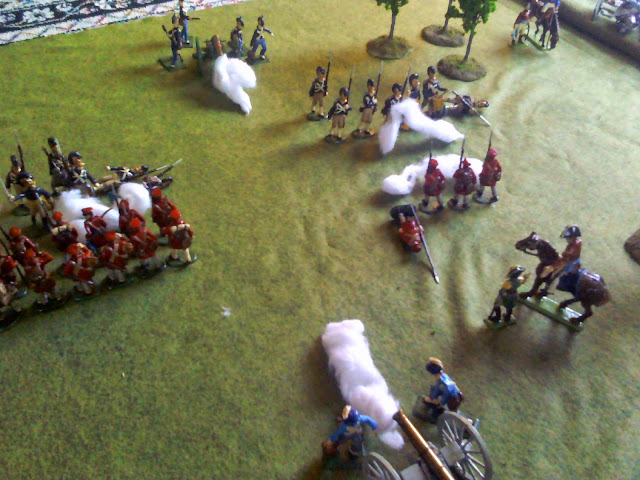 A great musket volley by Black's infantry at point blank seals their victory: 6 casualties in one blast! 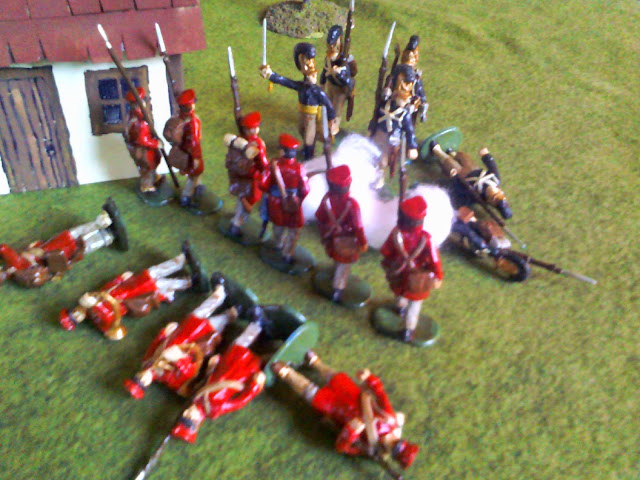 Including set up time, I think we played this whole game in 45 minutes or so.  The figures are a mix of HaT infantry, Timpo cavalrymen on Imex horses, Armies in Plastic cannons, Call to Arms crew with All the Kings Men heads swapped on, and Italeri command figures (phew!).

Posted by Portland Little Wars at 6:59 AM 2 comments: Links to this post

We played our second English Civil War game, again using the Pike & Shotte rules. Each side had twice as much infantry as the last game (so two infantry 'battalias' of one pike block and two musket 'sleeves' each) and two cavalry battalias of two squadrons each (last game had one battalia of three each).  We also used medium guns instead of light falconets for artillery. 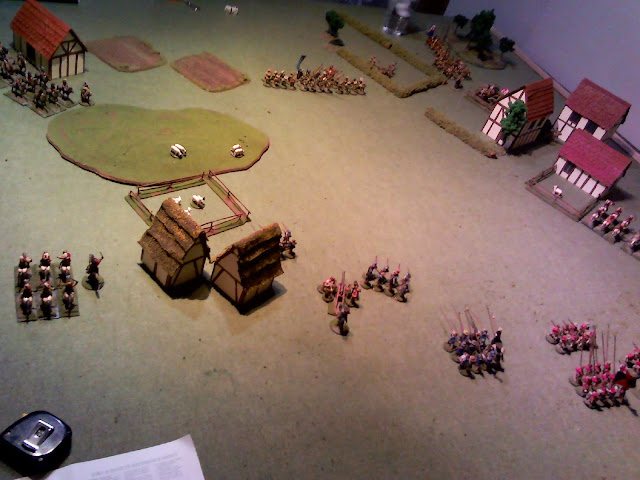 The board had essentially three terrain features arrayed along the center: a village surrounded by hedgerows on the south edge, a hill at the north-center (complete with grazing sheep), and woods on the north end. At the center and center-south was as fairly open space. 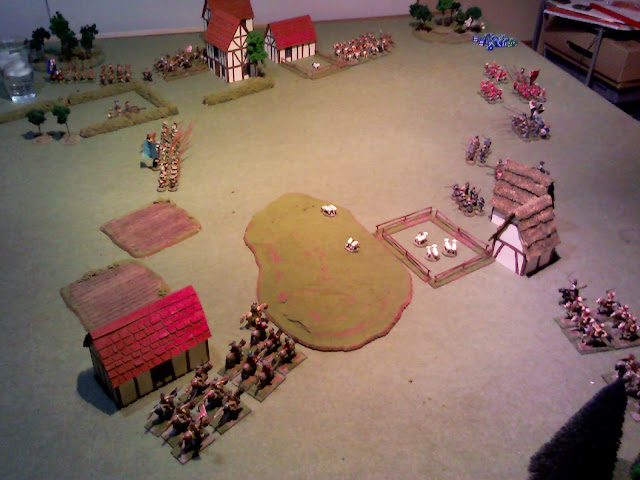 The Parliament forces (Gabe) spent a lot of turns trying to set up an infantry battalia (the 'Orange Regiment') in the cover of the hedgerows by the village while a cavalry battalia moved quickly through the streets. 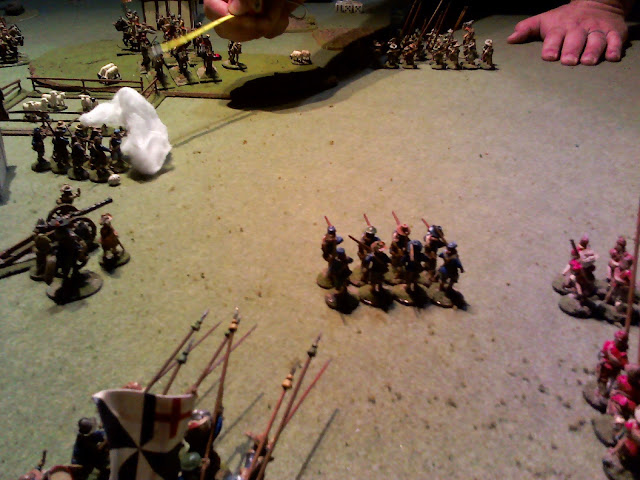 The Royalists (me) responded with (attempted) aggressive cavalry attacks on both flanks. The melee in the village streets went poorly with the defeat of the entire Royalist cavalry.The cavalry melee around and on the hill to the north was an effective stalemate. All this in spite of inferior Parliamentarian cavalry commanders! 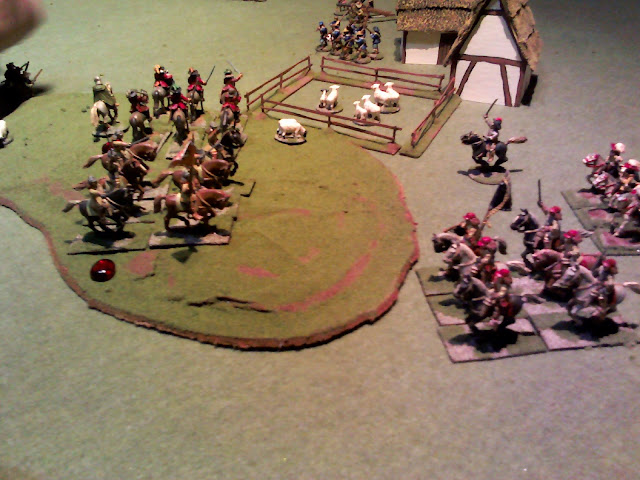 In the center the Royalist Blue Regiment lost a musketeer company early on and the Red Regiment failed to form-up as intended.Parliament's cavalry charged from out of the village as the Orange Regiment finally climbed over the hedgerows and got in musket range. 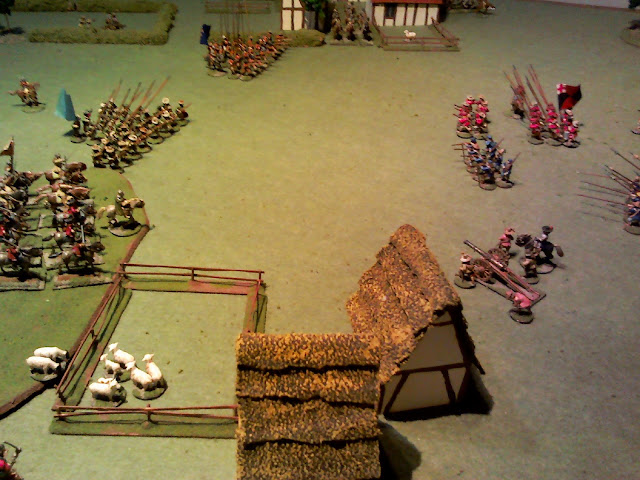 The Royalist Reds formed hedgehog causing the Parliament cavalry to pull up short and the Blues were already broken and leaving the field. The Parliament Green Regiment also began to break up but the game was over as the Royalist cavalry battalia lost in the village plus the breaking Red Reg. meant that half of the army was broken. 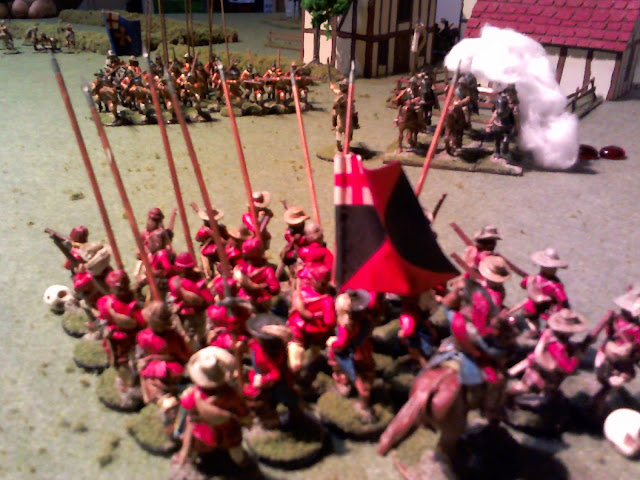 
1. Consider placing starting-lines 18" from table edge rather than 12".This could reduce the game time, as a lot of time is wasted as the infantry of both sides struggle to get into musket range. There would still be a large back-space behind each army for maneuvering and reserves.
2. Continue to forget to use the 'first fire' rule for all musketeers – each unit gets bonus for the first volley of the game.
3. Might be time to drop the 'marauder' rule for both sides' cavalry. Same thing for Parliamentarian cavalry's 'caracole' rule. Parliament cavalry commander could also have an '8' rating rather than a '7'.


I have now lost two games, somewhat badly, but I am enjoying myself immensely.
Posted by Portland Little Wars at 6:59 AM No comments: Links to this post

Death of a Swiss Pikeman 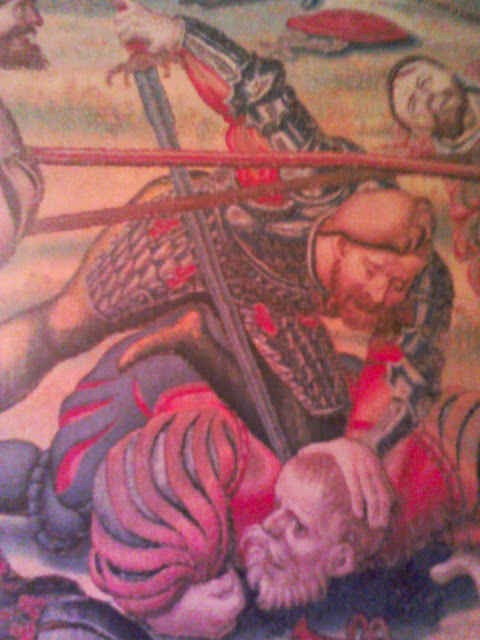 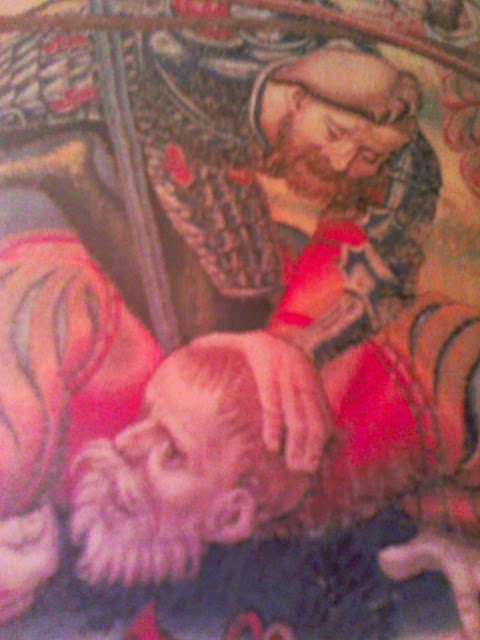 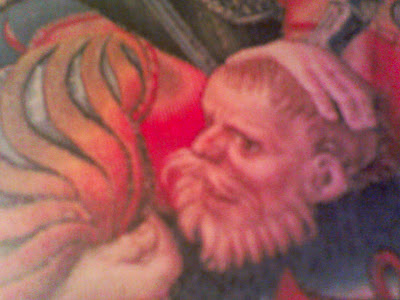 [From a tapestry depicting the Battle of Pavia, from drawings by Bernard van Orley.]

Posted by Portland Little Wars at 7:22 AM No comments: Links to this post 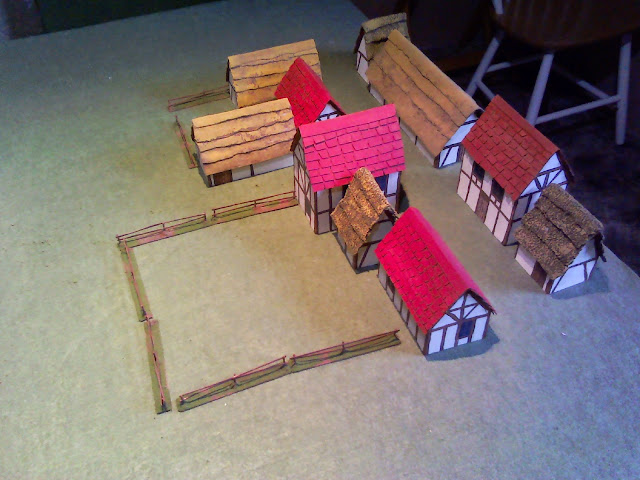 The collection of self-made 25mm buildings shaping up nicely (suitable for dark ages through early modern era)!  Future plans include some larger buildings such as a tavern, earthworks, perhaps an inn with a courtyard, and a 'manor house'.
Posted by Portland Little Wars at 12:15 PM No comments: Links to this post

These pics are from a game played at Guardian back in January.  Gabe fielded his Vikings and I fielded my trusty Welsh. 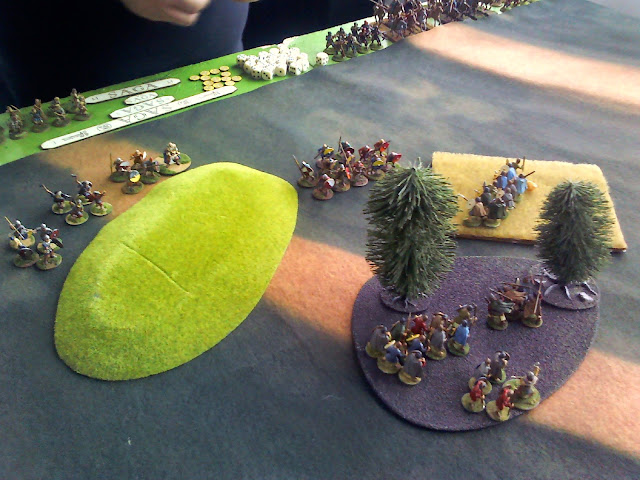 An interesting game in that the Welsh spearmen in the wheatfield there were knocked out in the second round and I was even considering conceding the game. 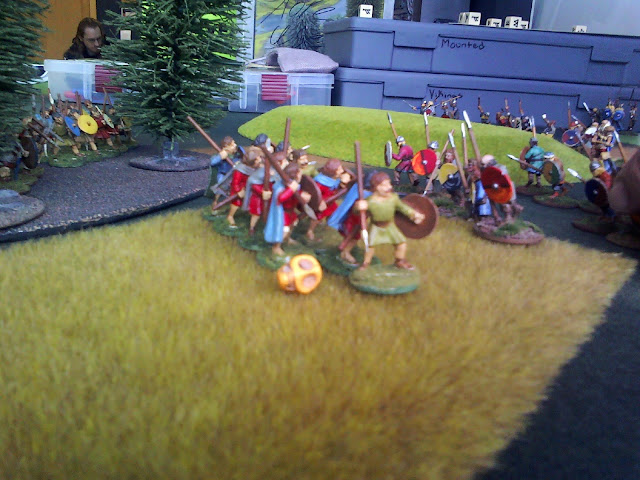 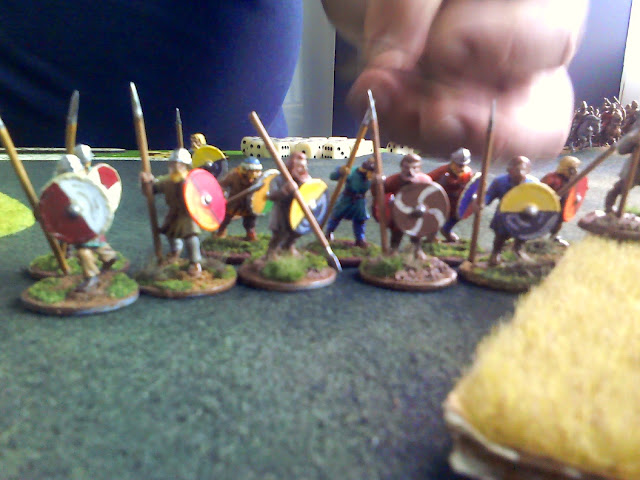 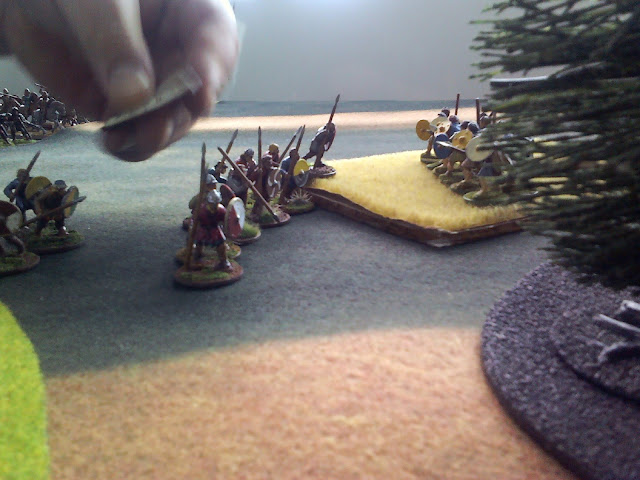 However, the rest of the Vikings came over the hill there and into the woods.  There the Welsh ambushing tactics paid big dividends and basically got me back in the game, which was then won by a thin margin.

Posted by Portland Little Wars at 4:01 PM No comments: Links to this post

Inaugural game of Pike & Shotte was played Friday before last using my collection of English Civil War figures (Old Glory metals and Warlord plastics, with some old Garrison painted cavalry figures I brought on auction mixed in as well).  I have already noted the preparation for thisgame, which turned out to help a lot in getting us set up and going pretty quick. Gabe took the Parliamentarians and I the lisping Royalists. I won the dice toss and chose to be defender and set up the terrain. I had already arranged some terrain and building the table the night before and I decided to just keep it that way for the game. We strayed from the prep notes by forgetting to designate two units each as "freshly raised" and two as "steadfast", but oh well. 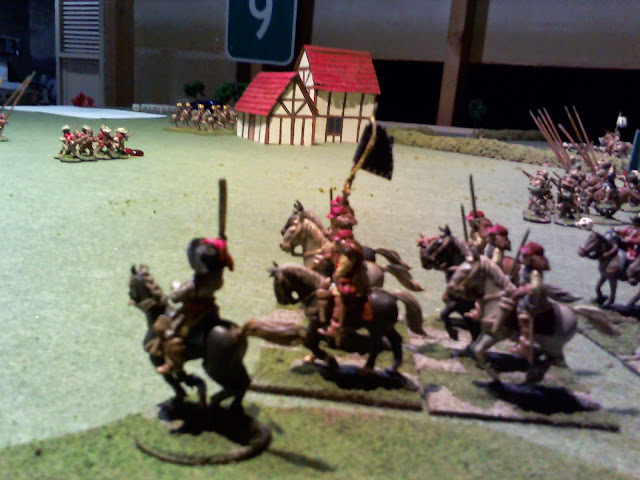 The Pike& Shotte rules are not difficult but the book is a bit wordy and spread out. I had gone to the trouble of making my own index to the book and this served us well until our cavalry began mixing up on the Royalist right flank and it became evident I had not gotten to the hand-to-hand part of the book on my index! 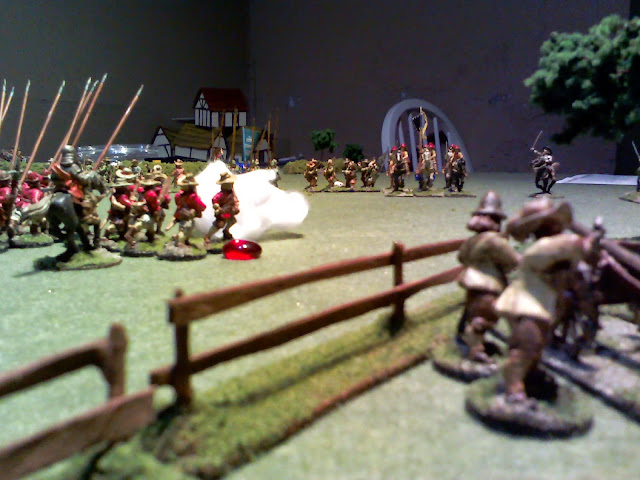 We enjoyed the little ways the rules forced the action to mimic the historic record a bit. The use of light artillery (each side had one light cannon) as infantry support rather than long-range bombard was noted, as was the Royalist cavalry rashness and Parliamentarian hesitancy (this clash being set early in the war). The firearms were likewise dreadfully short-range and ineffective and the cavalry melees appropriately back-and-forth and chaotic. 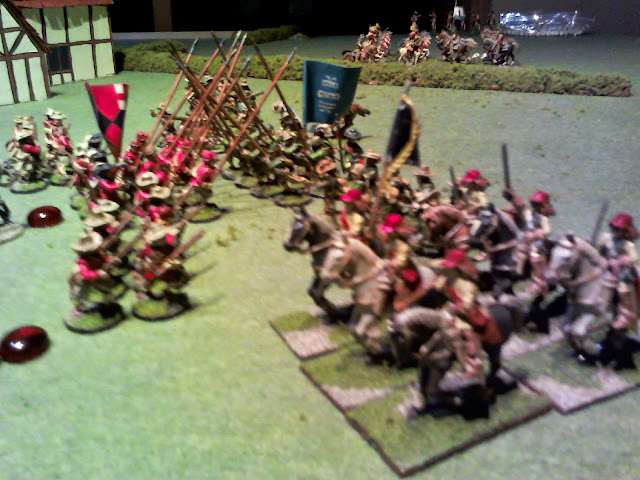 In the end the aforementioned Royalist cavalry on the right had been chased from the field (not after sending some Parliamentarians running first), opening the way for the Parliament horse to sweep into the flank of the Royalist infantry. However, it was getting on late at this point, so I suggested Gabe have one last turn and we call it a night.To see what would happen, he had his infantry make a general advance and we had a 'push of pike' with the opposing pike blocks (which was fairly uneventful in its outcome). 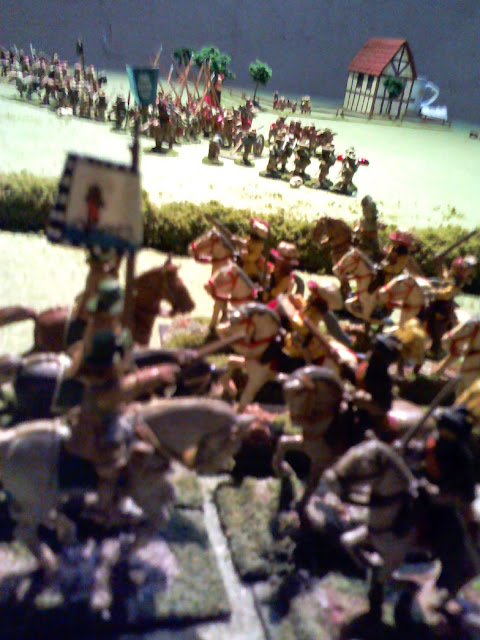 The next game is set for this coming weekend and will feature roughly twice the figure count (having kept things on the small side for the first outing).
Posted by Portland Little Wars at 6:59 AM No comments: Links to this post

Played two games of our Song of Arthur & Merlin campaign with Kyle on Friday.  This will pit my Irish marauders warband against Kyle's Saxon invaders (we're not sure how that works historically – both groups marauding deep into Northumbria?).  After a couple Song of Arthur games we felt that the campaign element was pretty crucial for the playability of the game - the need to fight another day short-circuits any movement towards win-it-all last all out attacks (which usually result in one or the other warbands being killed to the last man - sorta fun but not realistic and also dragged out and somewhat boring). 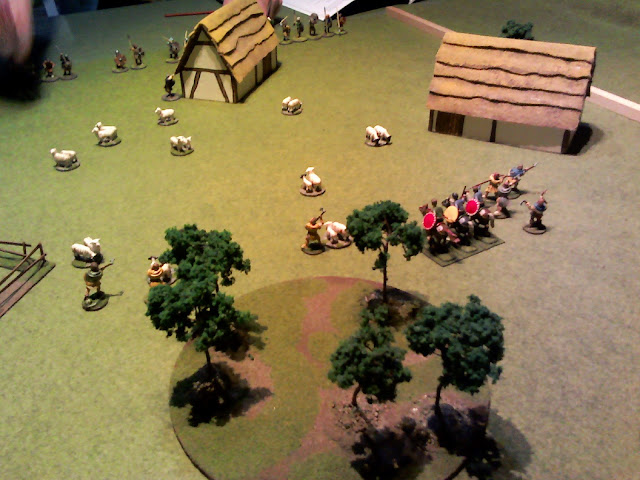 The Irish lost the first game. I rolled a turnover almost immediately and lost the initiative. With my three mounted riders this was bad, because they could have made a quick dash to wrangle some sheep early on. Still, I made a game of it and it came down to control of one herd to determine the game, and after some melee, when the Saxons ended up with about 4 guys around that one herd, I conceded the game. 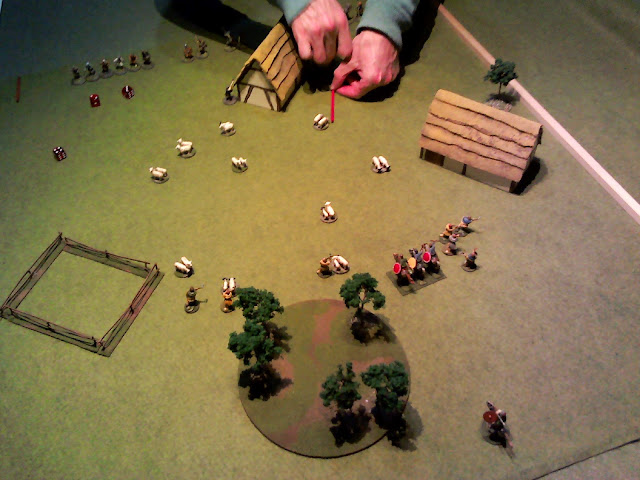 was the "all out battle" scenario. The Saxons deployed in this long continuous battle line. My strategy was for the riders to cross the entire board and hit one end of the line, with the Irish foot warriors on their heels and hopefully score a gruesome kill and trigger morale checks for the entire Saxon flank. But again the mounted guys could not move fast enough. 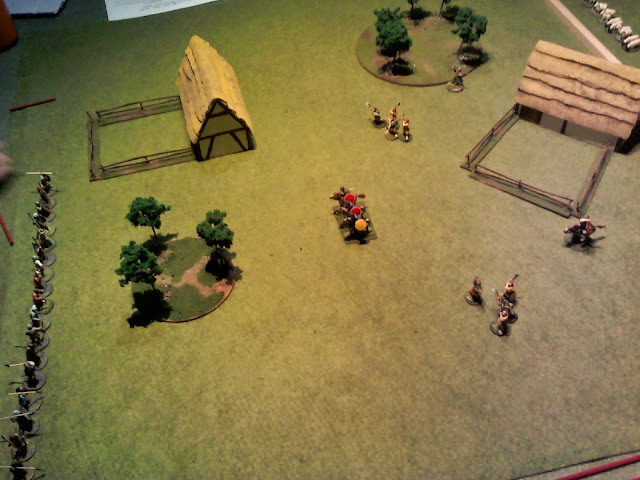 But because I used 'host of riders' at the beginning of the game, the Irish still crossed the board pretty quickly. When melee was joined, the Saxons were dangerously close to the table edge. If the Irish could trigger a morale check, most of the Saxon line could melt away as they fled. 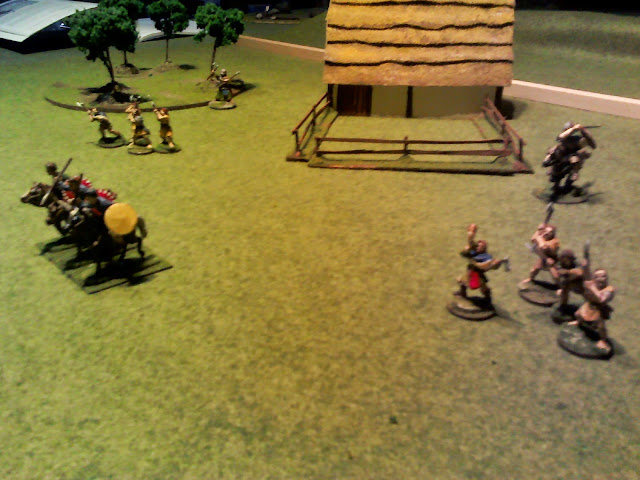 But Kyle was aggressive and it was me who ended up just getting totally mauled in melee. The first game was won by the Saxons by about 18 victory points to 12 points. In the second game, the Saxons won like 20+ points to 8. Ouch! 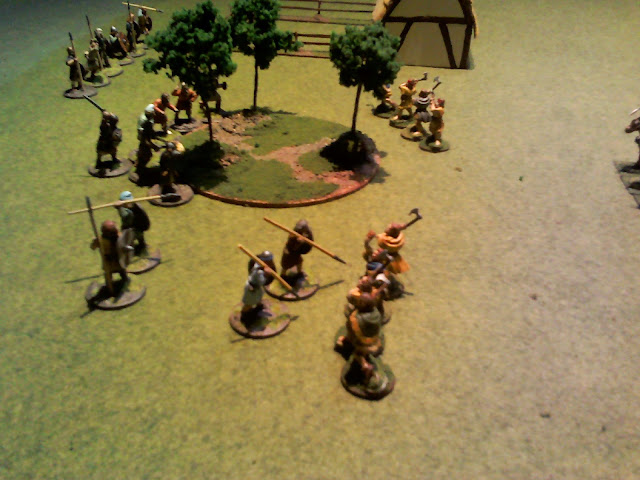 Post-game we both noted that the rules lend themselves nicely to a sort of narrative flow that keeps the game fun and light (even though I was getting my butt kicked). The campaign element also really helped things along.  In a couple of weeks we'll play another two-game set and see where this goes.
All my foot Irish figures are Old Glory. The mounted Warlord is Gripping Beast and the riders are plastic Wargames Factory Celts. I think all of Kyle's Saxon figures are Gripping Beast.
Posted by Portland Little Wars at 12:36 PM No comments: Links to this post