Battle on the River Glein

We played a very fast game of Lion Rampant using some Arthurian/Late Roman variations I had generated after having gotten my hands on the old (and quite informative) WAB Age of Arthur supplement.  I had previously painted some Old Glory "migration period" Saxon infantry, Irish infantry and a few Romano-British infantry for use in Saga warbands, and had thankfully not sold them at Enfilade last year.  I accumulated a few more OG packs, along with some Footsore Miniatures, and finished painting up the whole lot in December (including rebasing some of the individually based earlier figures to multi-base). 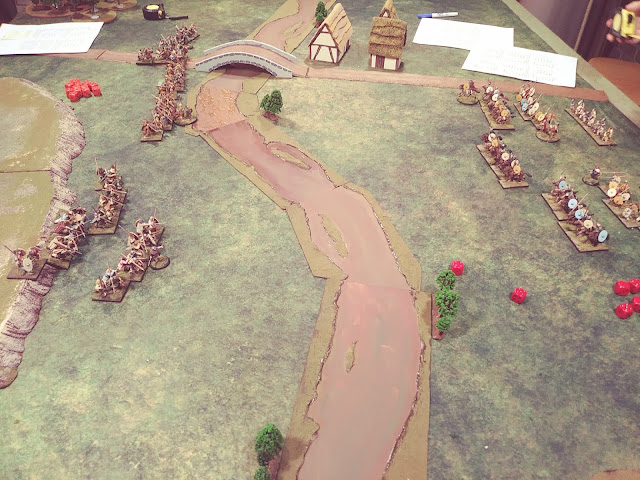 (Above: starting positions, with the Saxons on the left and the Britons on the right)

The "core stats" for almost all units is the foot yeoman from the Lion Rampant book, whom moves 8" and has an armor of 2.  He is a "fighting man" of his day, which is to say, he can more or less handle a sword, a spear, a shield, a bow, or a horse in equal measure if needed.  I got this idea or approach from reading Guy Halsall's excellent Warfare and Society in the Barbarian West 450-900 (2003) (which I acquired through my local library's Inter-Library Loan program!).  From this basic profile, I adjusted some stats up or down, and added special rules inspired by the WAB supplement. 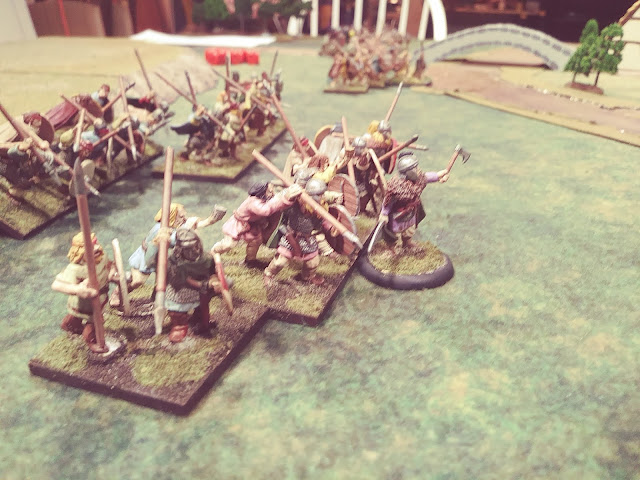 (Above: the Saxon right, led by a Hengist or Horsa type fellow).

The Saxons were aided by Irish allies, with the following stat block.

IMPETUOUS CHARGE: At the beginning of this players turn, roll a dice for each unit with the Impetuous Charge rule. On a roll of 1, they will move their full move toward the nearest enemy unit and attack it if it is in range (see Wild Charge rule). On a roll of 2-6 the unit may be activated normally. 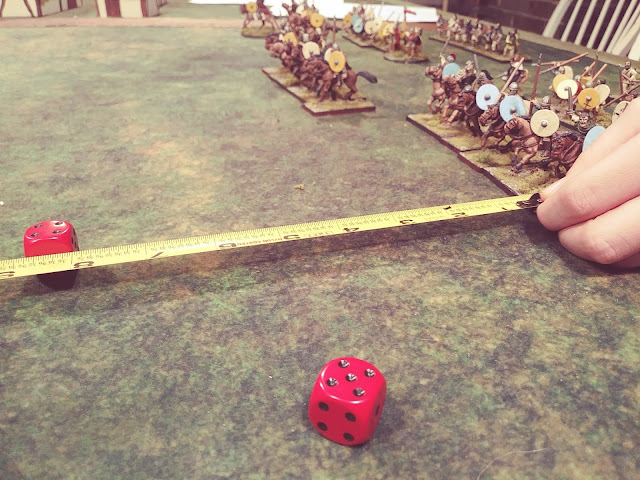 (Above: the Briton cavalry on the move)

The Britons had fewer special rules but more unit types at their disposal.

Both sides had three commanders, and all commanders had the "Commanding" rule, so they could reroll one failed activation if a unit under their command was within 12". 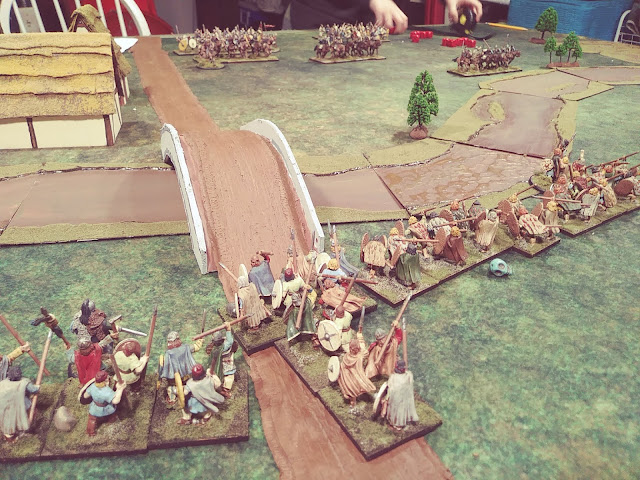 (Above: the combined Saxons and Irish advance on the left).

The game's objectives were have a unit on both the bridge and the ford when the game ended.  The game would end when one side had lost more than half its units - when this happened, the other player would get one more set of activations and the game would then stop.  I was playing the Saxons and figured my best bet was to get on the bridge and force some melees where my various melee-bonuses would come into play.  Other units could be close by and hurl javelins. 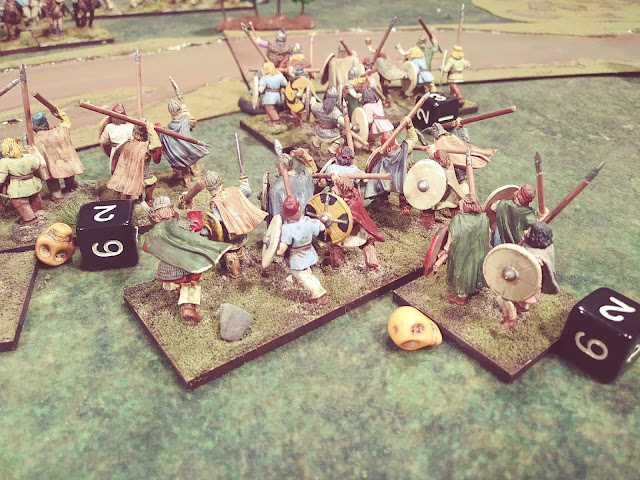 (Above: my strategy not going well)

However, the Briton archers had brilliant luck.  Even at extreme range (hitting on 6s!), they were able to lay down 3 casualties on one my Saxon units.  Melees were a bit of a wash - I would get below-average results on to-hit rolls and the various rerolls only served to make them average rather than devastating.  The Britons (played by Sebastian) were also very aggressive with their cavalry early on which I did not expect.  The result, as illustrated above, was that many of my units had 2-3 casualties laid out on them very fast and many were disordered. 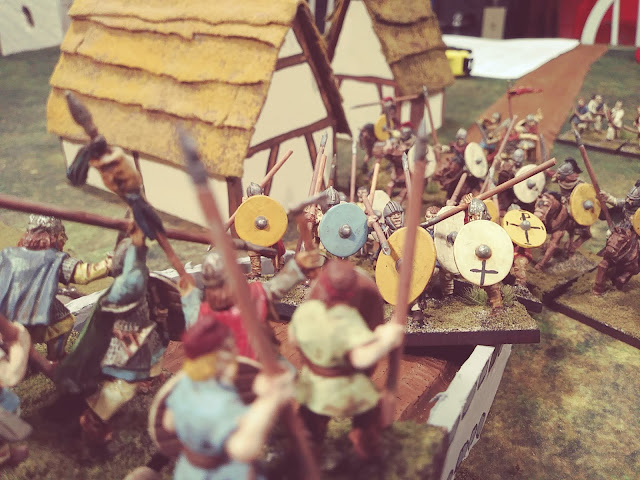 (Above: fighting on the bridge)

Things went possibly worse on the other flank.  One Irish unit threw a snake eyes on its first morale test and fled the field. The remaining Saxons on the bridge were effectively bottlenecked and really couldn't support each other, so the Britons essentially took turns with various fresh units hitting the same Saxon unit. 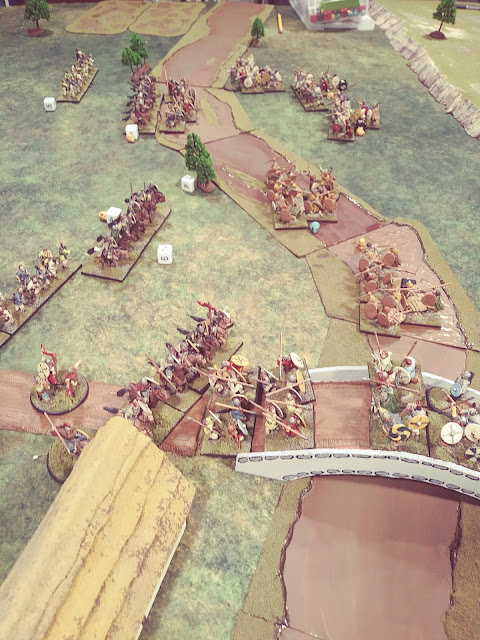 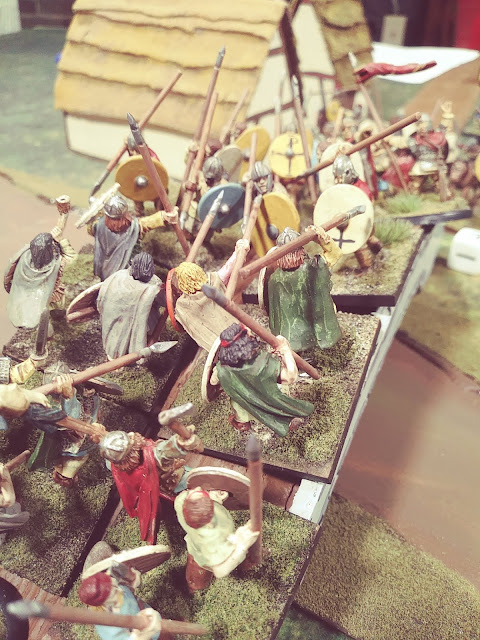 I lost my fourth unit (over half) on the Britons's turn, and the Britons then proceeded to complete their turn and put disorders on all three of my remaining units.  On my turn (the last turn), one of those units failed its rally and fell back to almost its starting position! 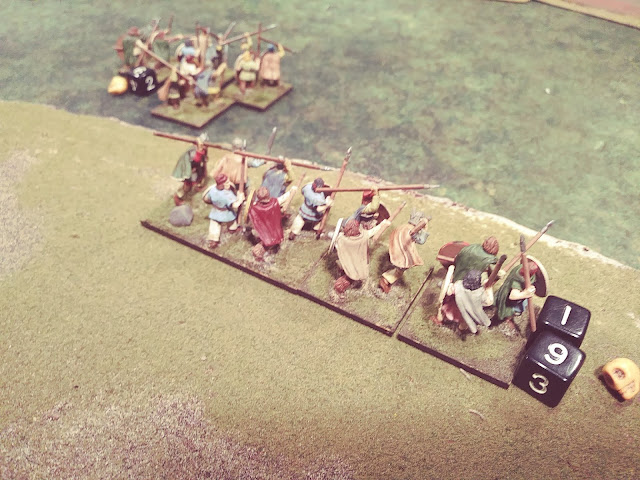 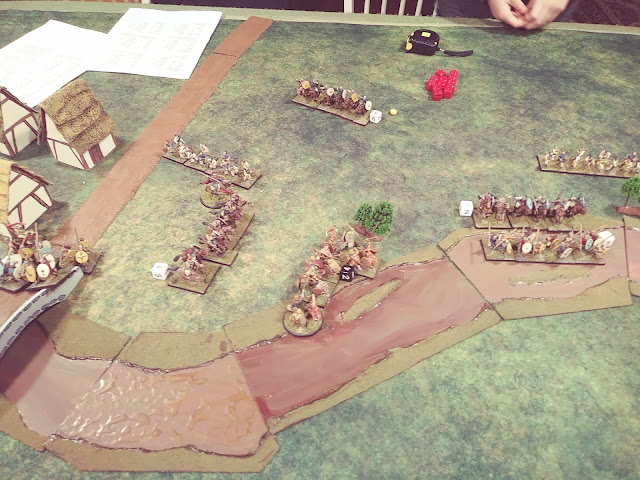 (Above: final positions - one unit of Irish still on Briton side of river, but bridge and ford both held by the Britons, scoring the a "major victory".) 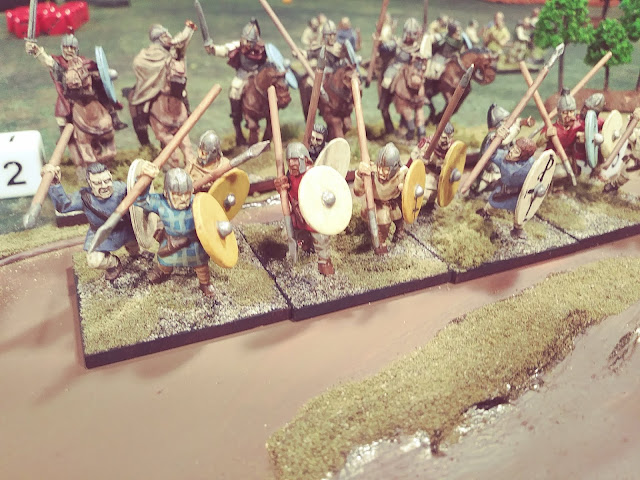 (Above: victorious Briton milites at the ford)

I think the Saxons played poorly because of dice (as always) but also the scenario involved two bottlenecks and the various Saxon abilities might work better in concert in an open field, where a proper "battle line" can be formed. Their "Gregarious" rule never game into play, either - they all fell back too fast to wear any enemies down!  The next scenario is the River Dubglas and has significantly more open terrain - we shall see!

The "Impetuous" rule still needs work.  I'm thinking of having units test for it at the END of their turn and not the beginning, and only testing if they have not otherwise had a successful activation.  The idea is they try to run off and attack when you are trying to make them STAY PUT.  If you successfully move them then they are content because they are distracted. If they do not move the become impatient and take matters into their own hands.  I have to ponder this a bit and decide if units that did not activate because your turn ended need to check for impetuous or not...
Posted by Portland Little Wars at 7:30 AM