These 24 Welsh archers were the easy to paint on account of the  general lack of gear. As you can see, the majority of the figures wear a tunic and little else. When you do not have to paint chainmail or shields (or even pants, for that matter) the process is greatly expedited! These are from the 30 figure set ("Welsh Bowmen" set number DA-22) by Old Glory Miniatures, which comes with 5 poses in 25mm, but sadly no head variants. 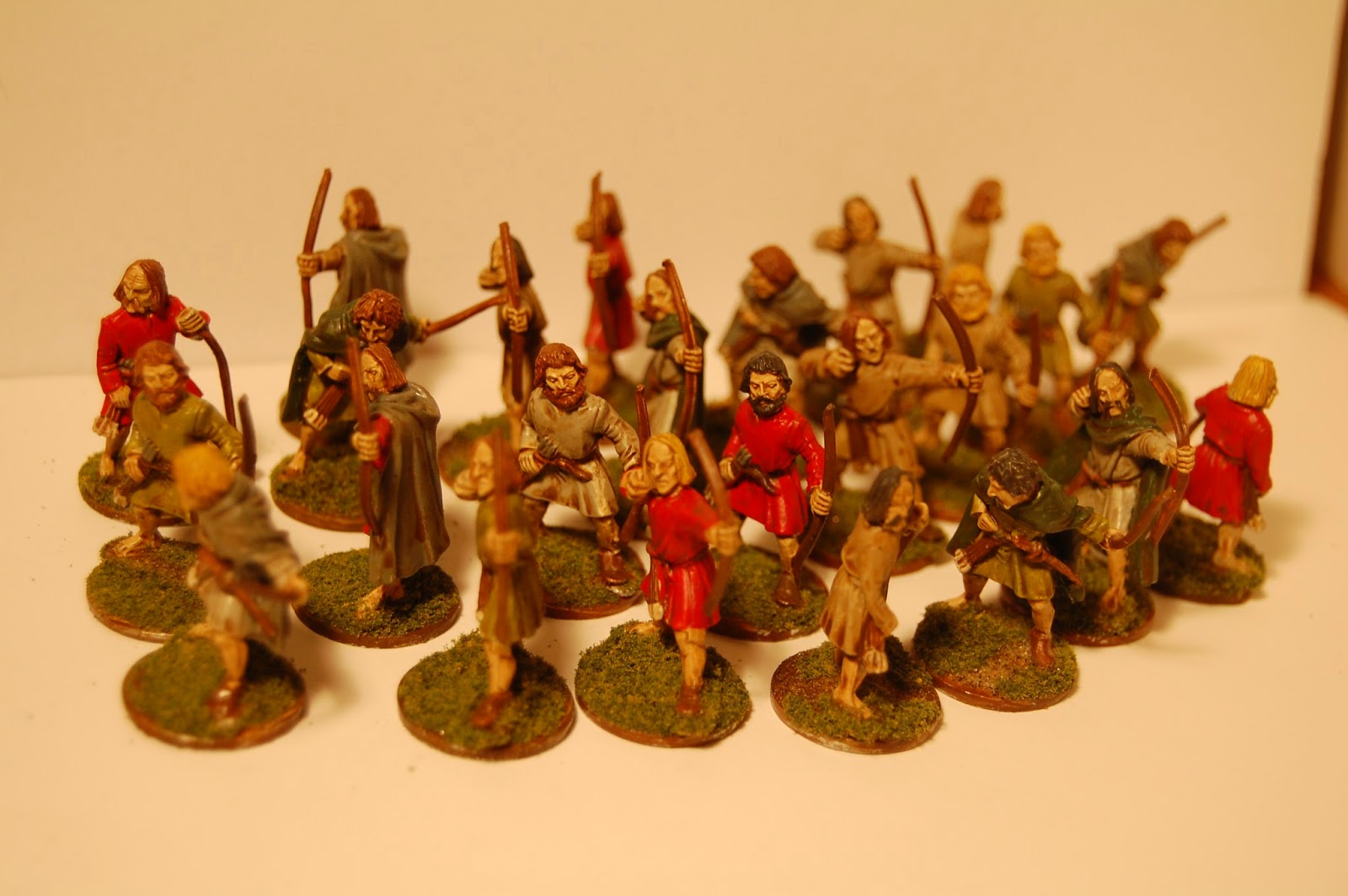 I'm a fan of the pose where the fella has one end of his bow on the ground. 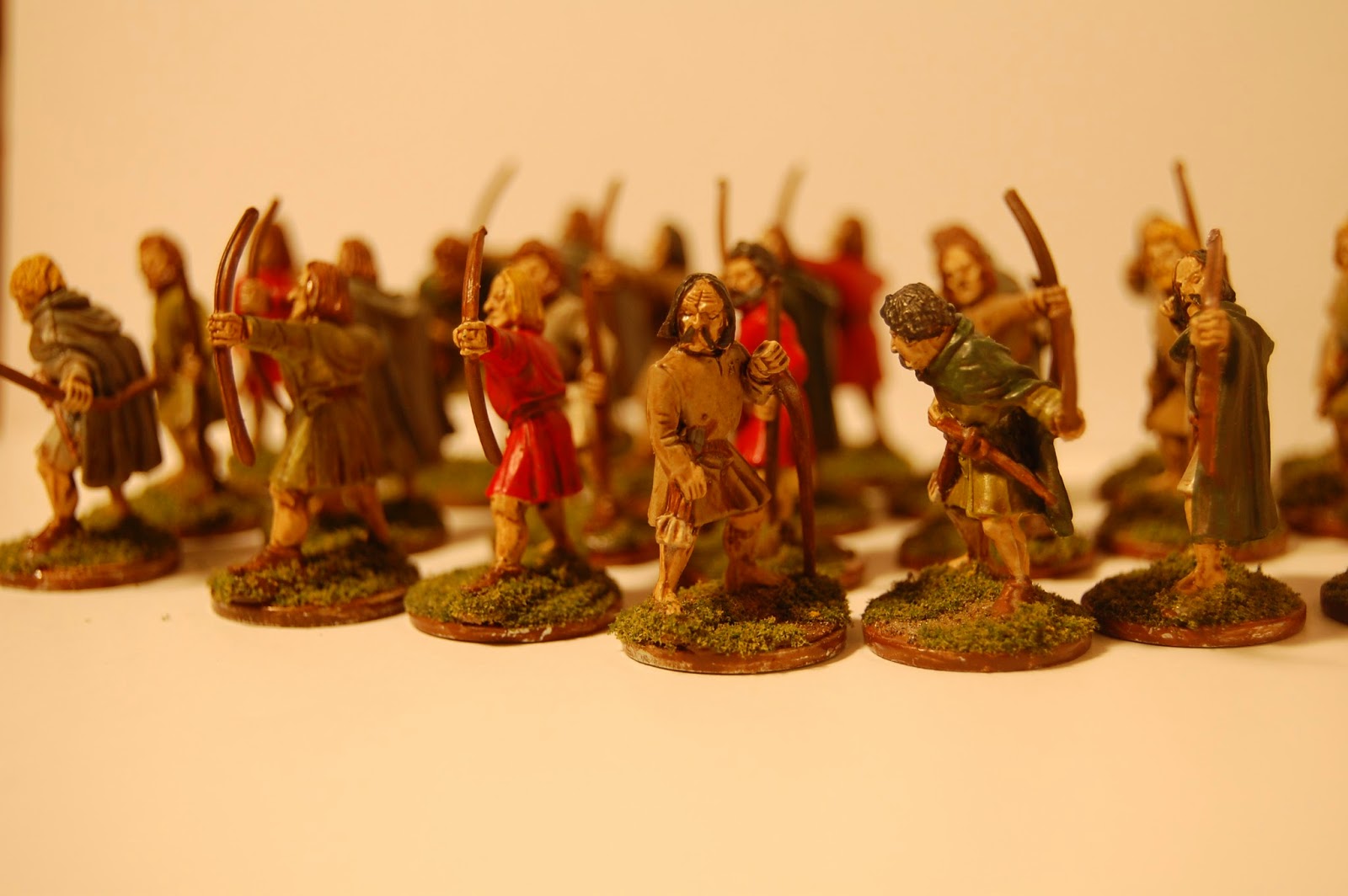 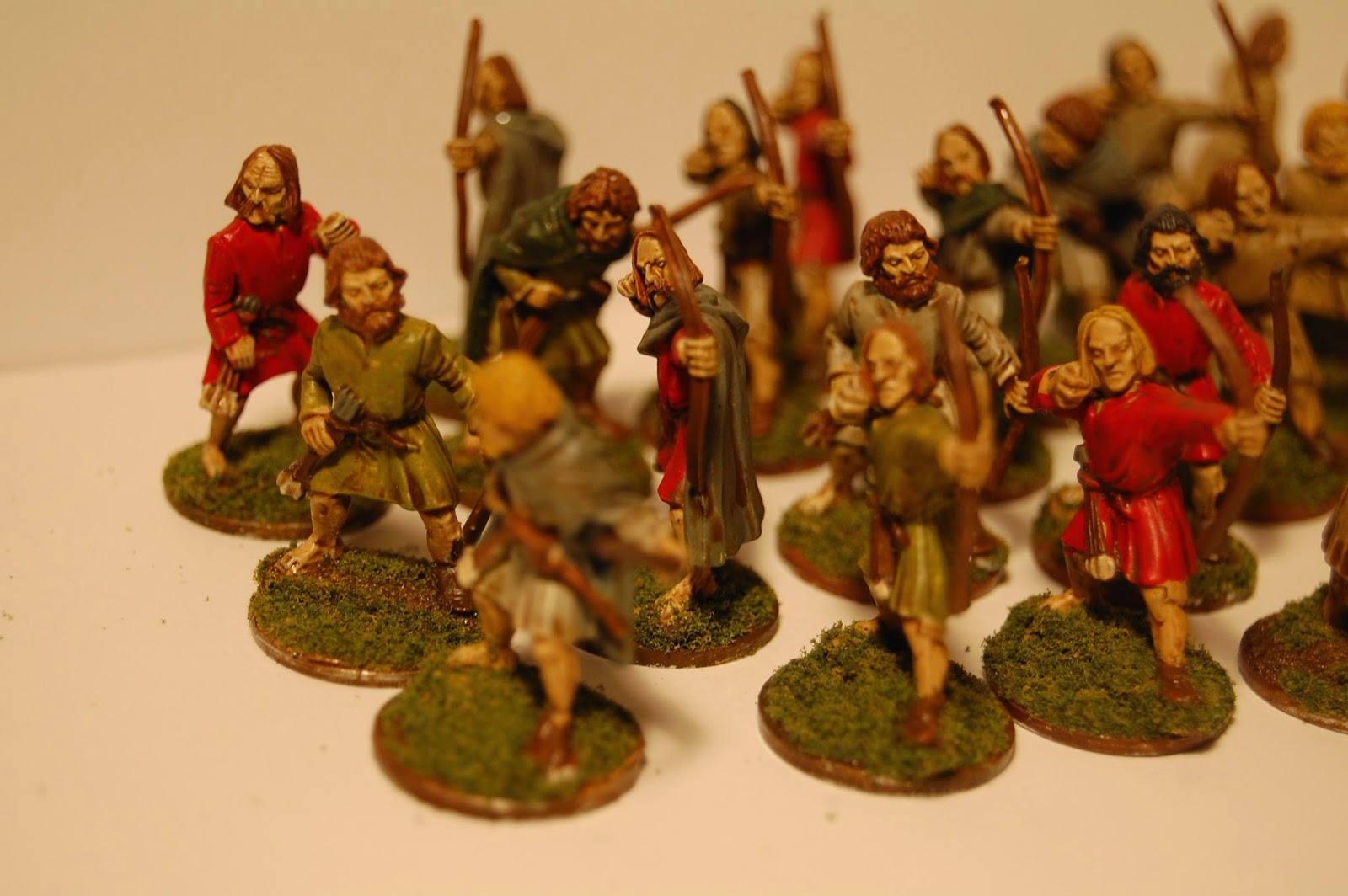 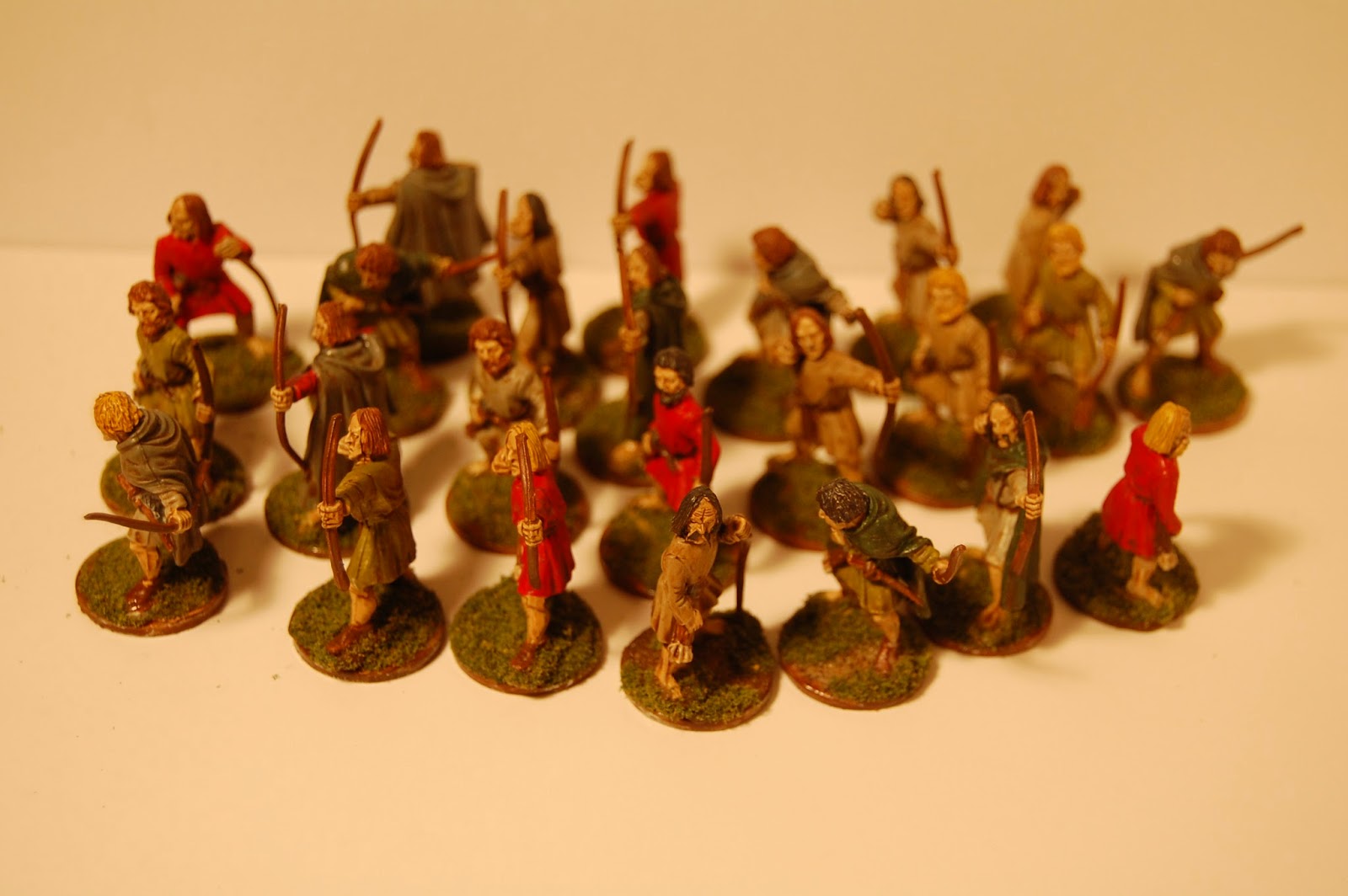 Another amusing feature is that all but one of the poses is not wearing on shoe on one foot. This is a reference by the sculptor to a 13th century illustration of a Welsh archer. Historians do not quite know what to make of this depiction. It did originate from London, so one has to suspect the intrusion of metropolitan (as it were) attitudes about the provinces by the artist.

These fellas have not seen a lot of use on the table. The Welsh in SAGA carry javelins which precludes the necessity of having a ranged unit like archers in your warband a bit. I anticipate using them as Anglo-Dane levy archers, however.
Posted by Portland Little Wars at 6:58 AM No comments: 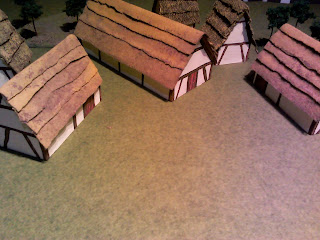 "Cozy little village you got here. Y'know, Northumbria's a dangerous place. Be a shame if anything happened to your village. Real shame."
Posted by Portland Little Wars at 7:24 PM 1 comment: Links to this post

I wanted to get my experimental "freelance Napoleonic" 54mm figures in use but also wanted to try another horse and musket era ruleset. All the King's Menis a clean and simple ruleset designed specifically with 54mm figures in mind, but the activation system (drawing playing cards) is a bit limiting. For one thing, there are no group activations and this tends to isolate units with the result that action tends to become centered around one or two units who are the fray and other units (which you did not move earlier) end up forgotten at the edges.
I'd read the Black Powder rules and at least those have the option for group orders and movement, but I have also recently become more aware of the large family of skirmish rules based on the Song of Blades & Heroes "engine".  This led me to purchase the PDF version of the relation Drums & Shakoes: Large Battles on the inkling it could be adapted to 54mm.
The first conversions were easy enough: DS:LB features infantry battalions of four stands with a width-to-depth ratios of 3:1 with about 3 or 4 figures per stand.  This translates pretty easily into the AtKM standard of 12-man infantry units. Cavalry are two stands of the same width as infantry stands, which will give you a four-figure cavalry unit (which is an immediate economy over AtKM's six-figure cavalry units).  DS:LBuses a VS-S-M-L movement scale (similar to SAGA) which I translated into 3"-6"-8”-12".  Artillerty is DS:LB is two stands per battery with one gun each – this caused a slight problem because I have only three guns completed at this point. For the purposes of figuring out the rules I used a single gun. 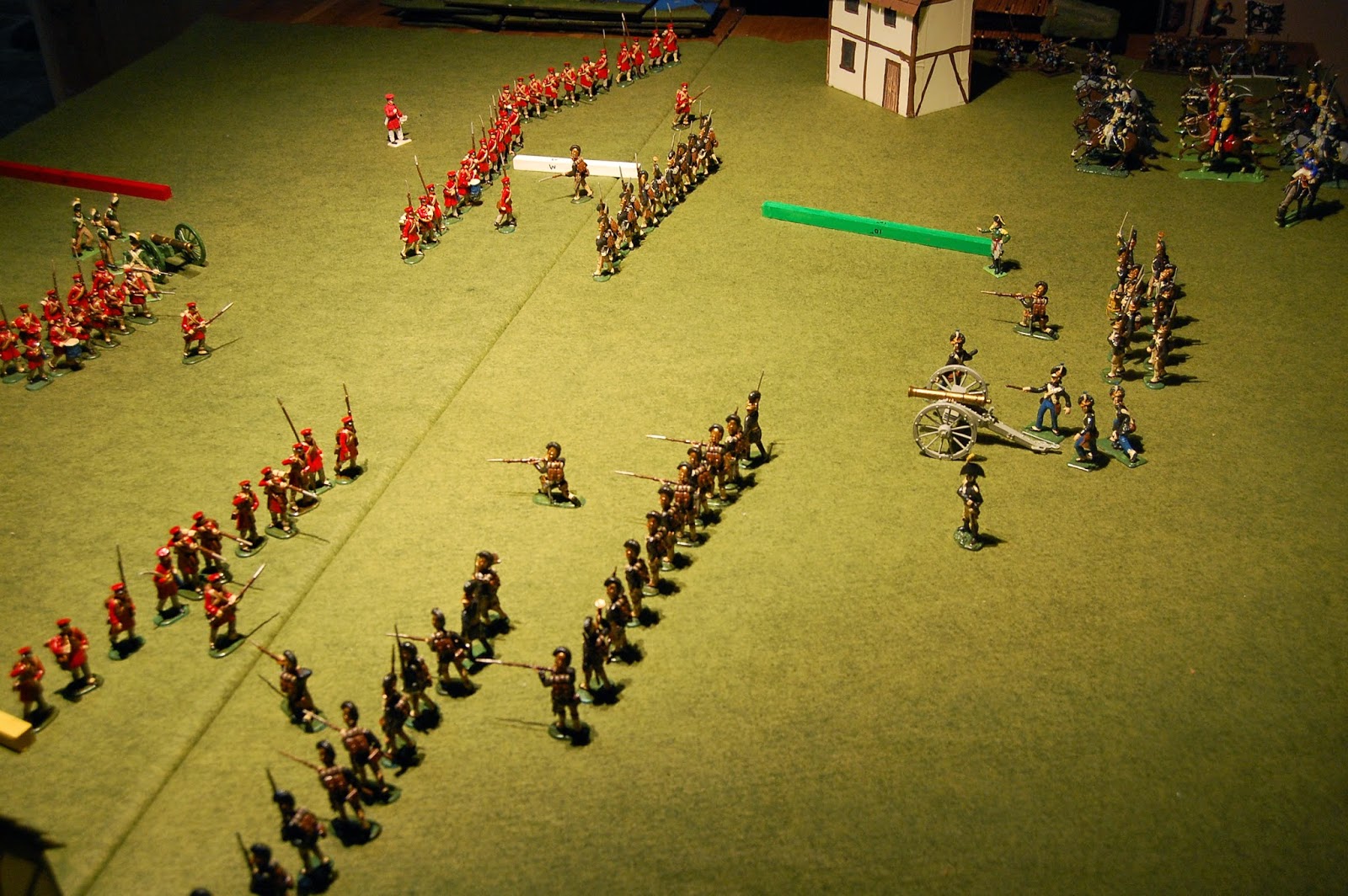 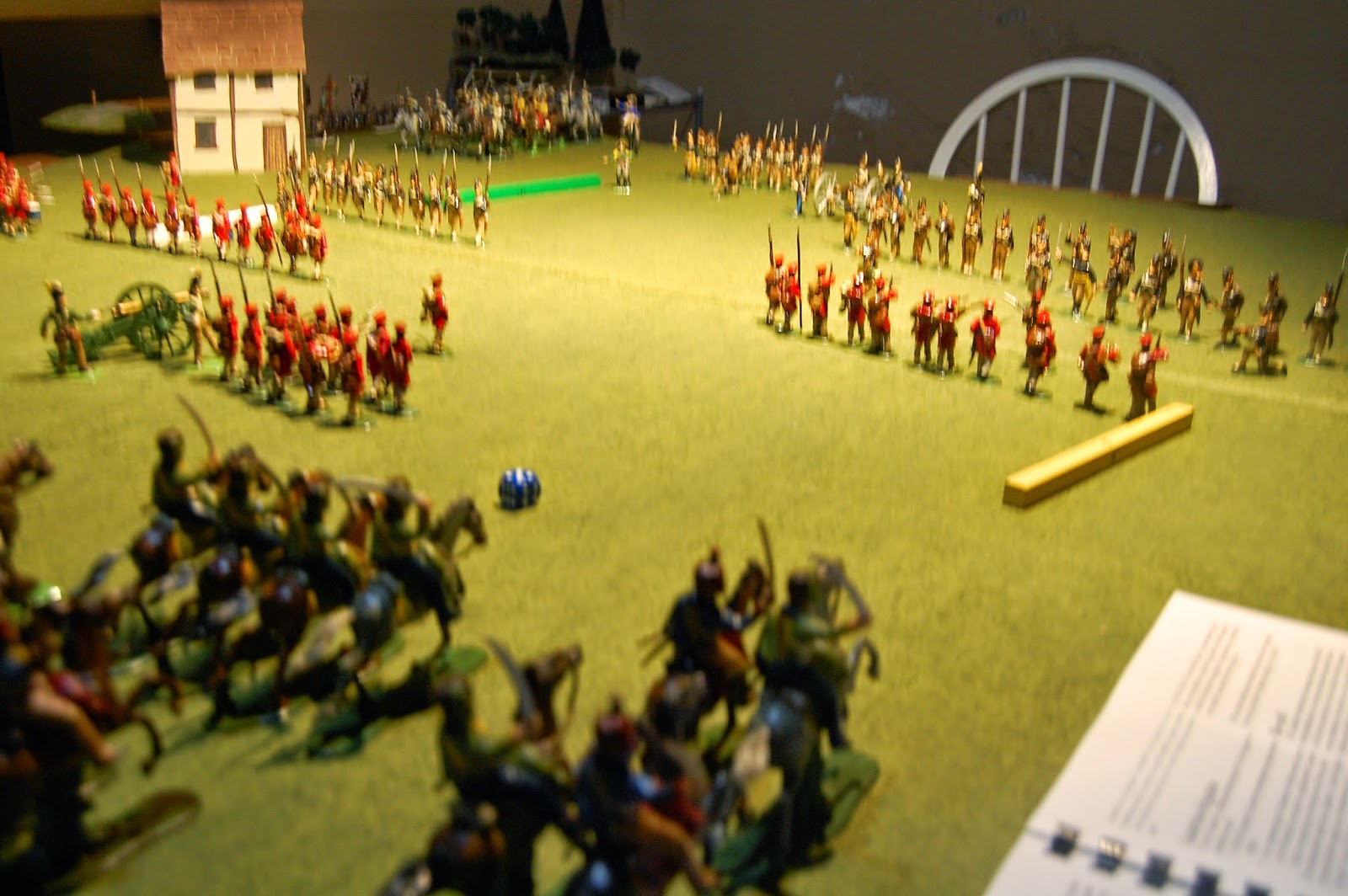 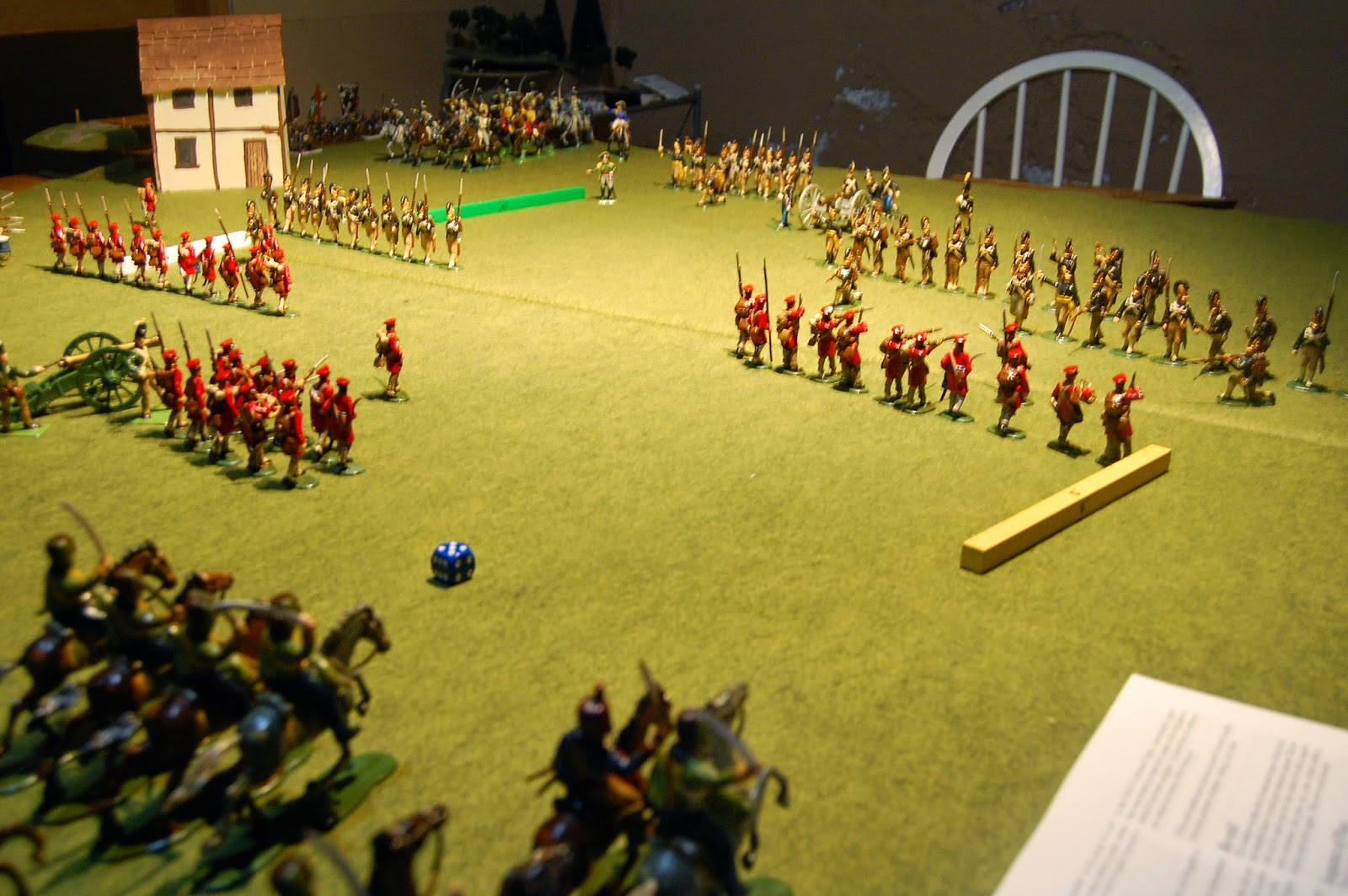 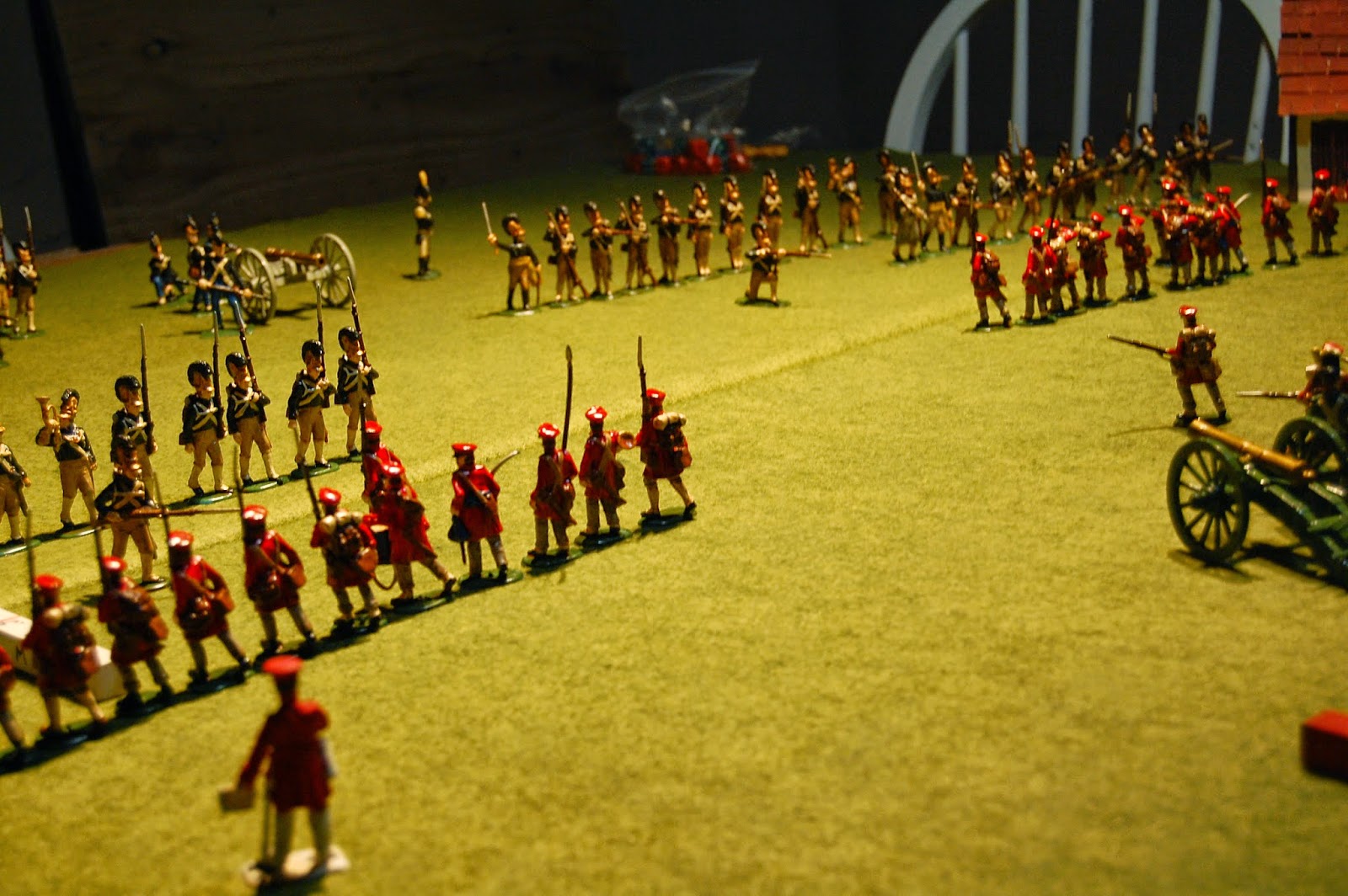 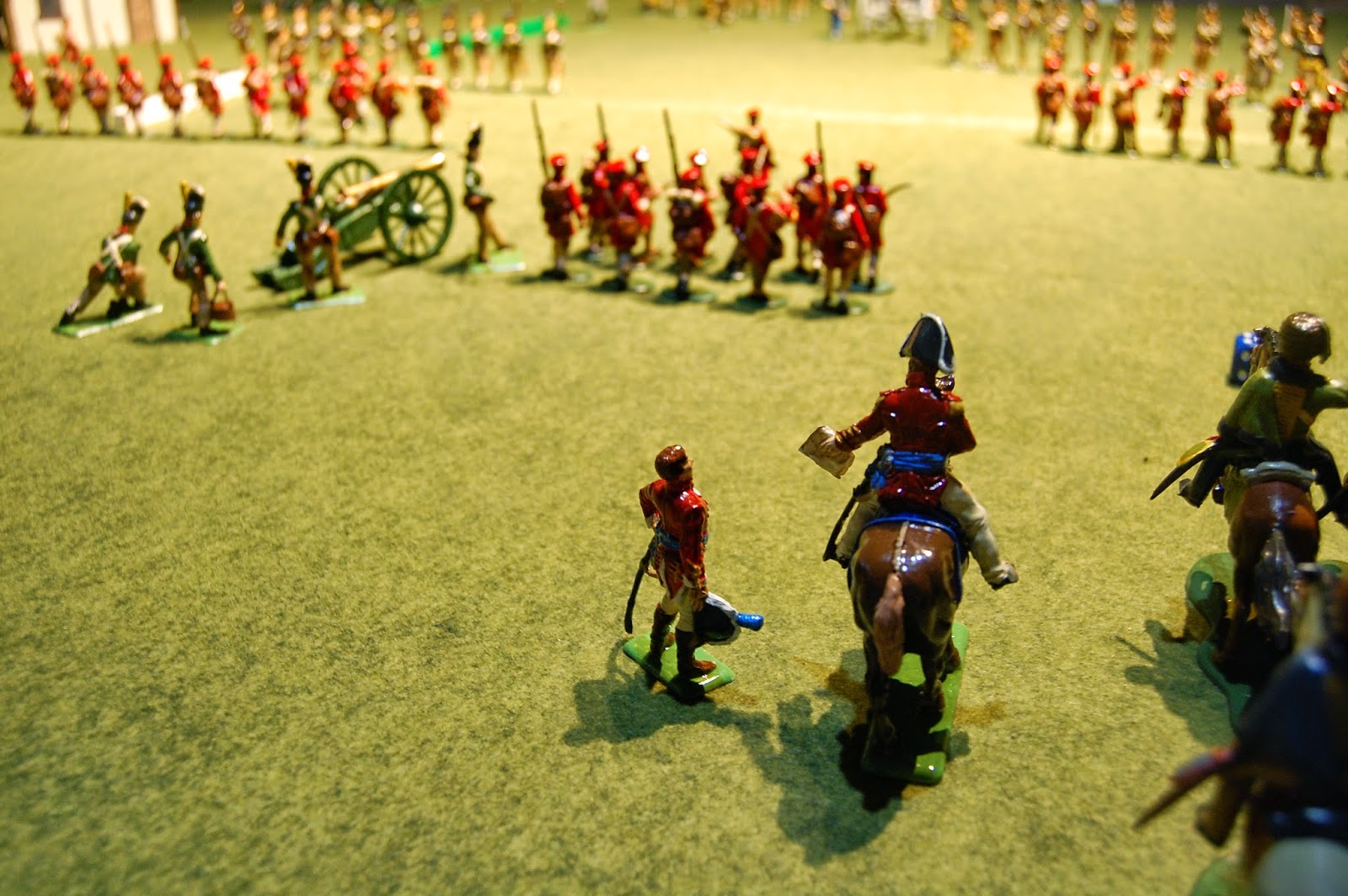 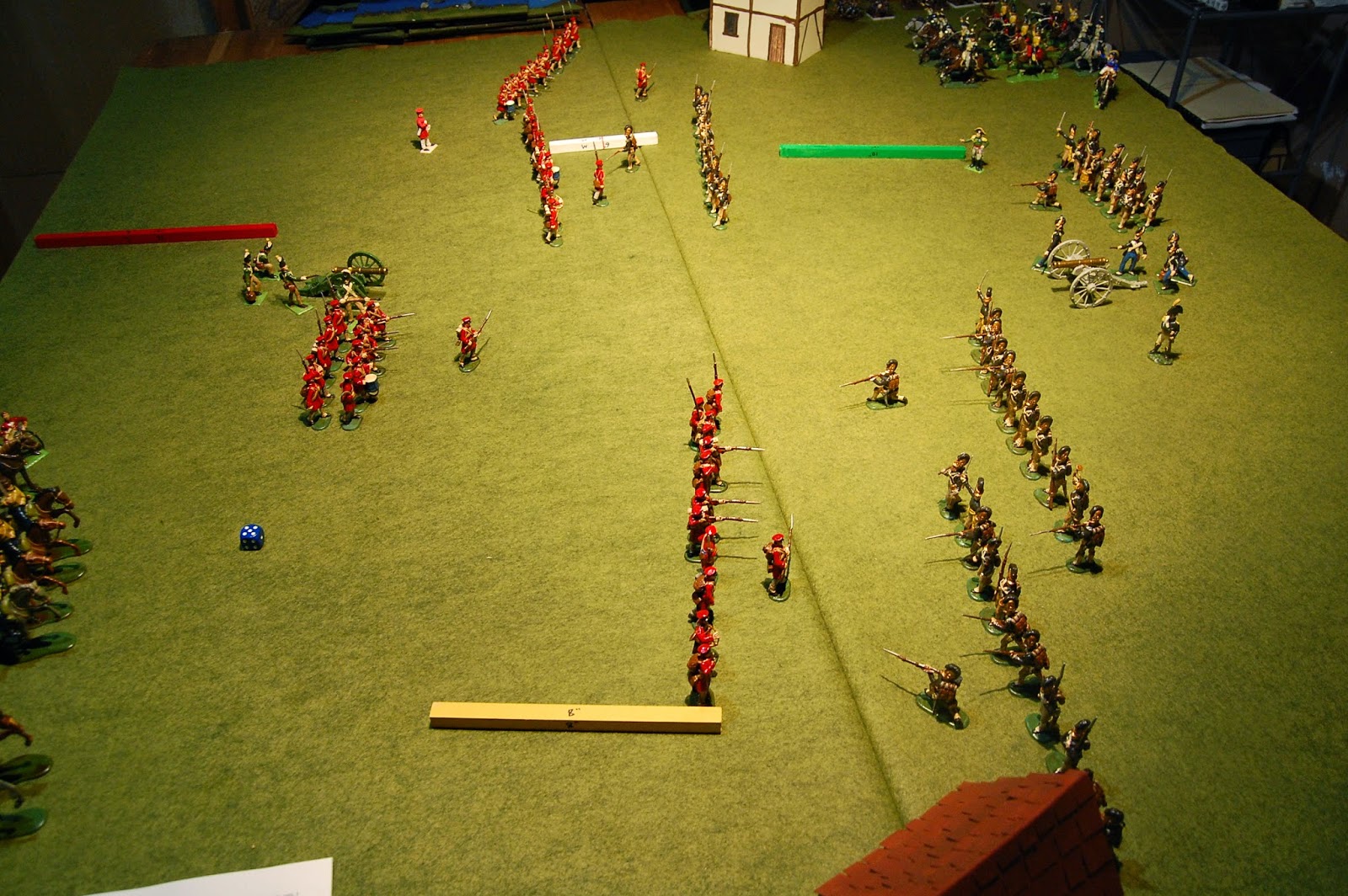 I really like D&S:LB!  The reaction moves created a nice simulation of simultaneous movement, with both sides' front lines drifting towards each other at roughly the same speed.  The group activations were also nice, with the red side in particular being able to move thier left flank up in an orderly fashion.  The 12-figure single file line formation took some getting used to visually, but make the line tactics and formations more in your face.  I went through a few combats and they were interesting. Red was able to drive back Black, but in one case Red took more disorder markers than Black (there is no figure removal), so I thought that was a different take on things (victorious at a cost).
Posted by Portland Little Wars at 2:16 PM No comments: Links to this post

Here are 27 "9th Century Irish Warriors with Axes and Command" (set number SVS-05) in 25mm scale by Old Glory Miniatures.  The bag comes with 30 figures: there are 24 of the two handed axe wielders (five poses with head variants), plus one standard bearer (with a separate wicker shield), a horn, and a warlord (the set comes with two each of the "command" figures). 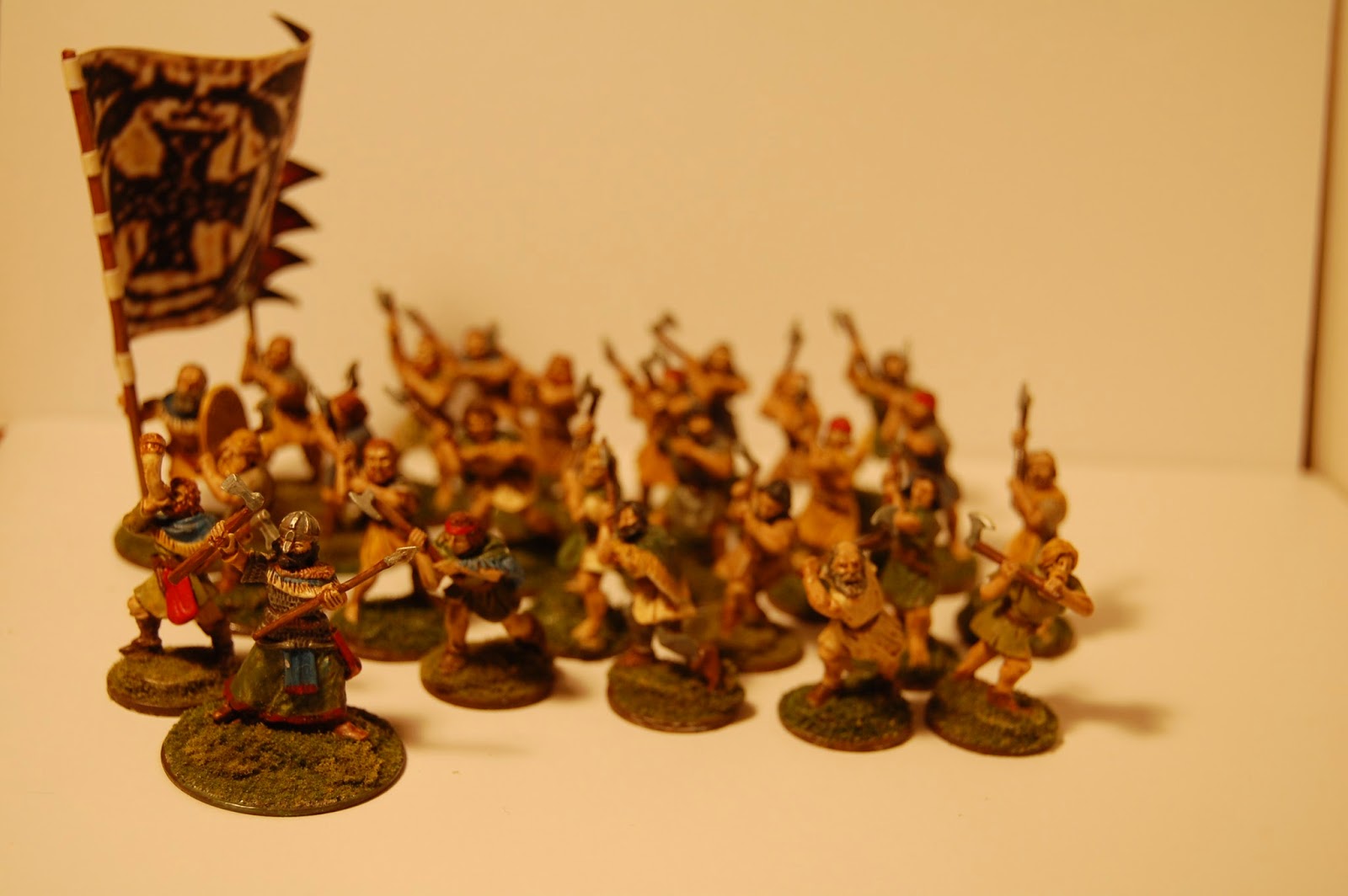 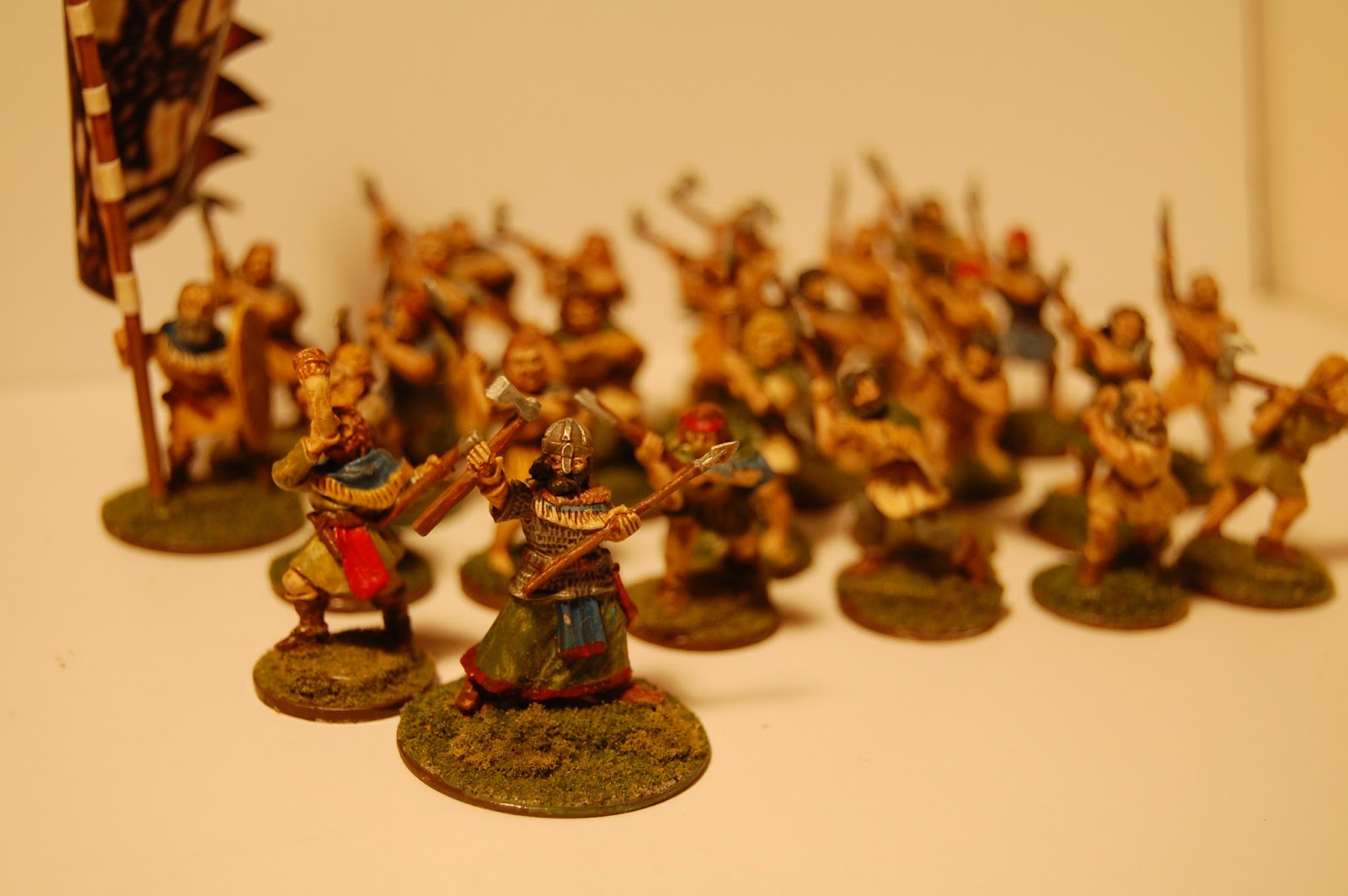 The head variants are I believe cast separately, and possibly attached with solder? The heads are not only different but faced in various directions. You can also slightly twist the axe head's orientation which helps the overall pose seem more sensible. The horn and standard bearer figures plus one of the axemen poses wear a sort of short fringed poncho which allows you to break that group out as elite bodyguards or noble warriors if you want.
﻿ 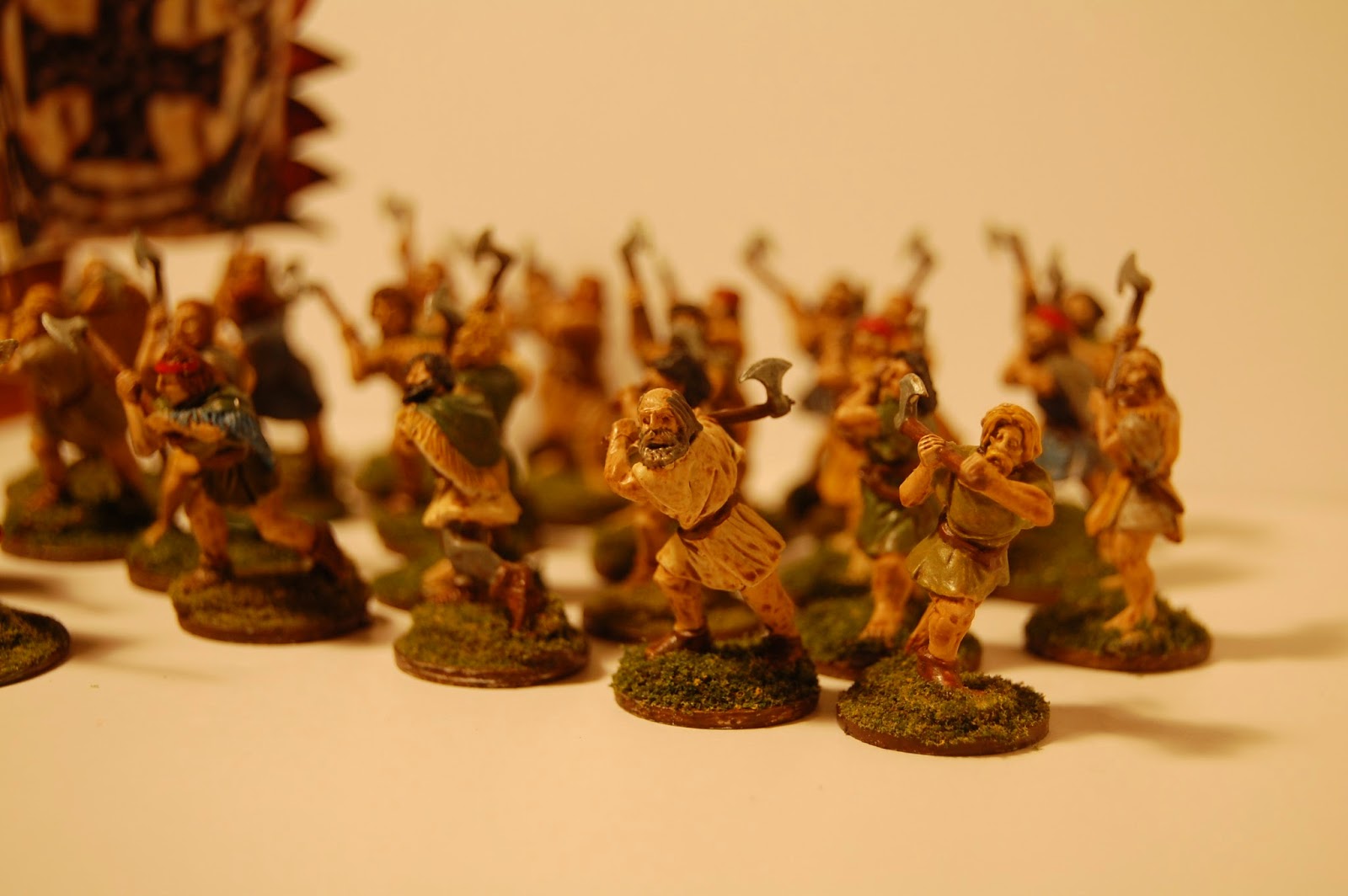 When painting I used a lot of yellow because I found internet references to Irish warriors favoring clothes dyed saffron.  I also experimented a bit with painting red hair. 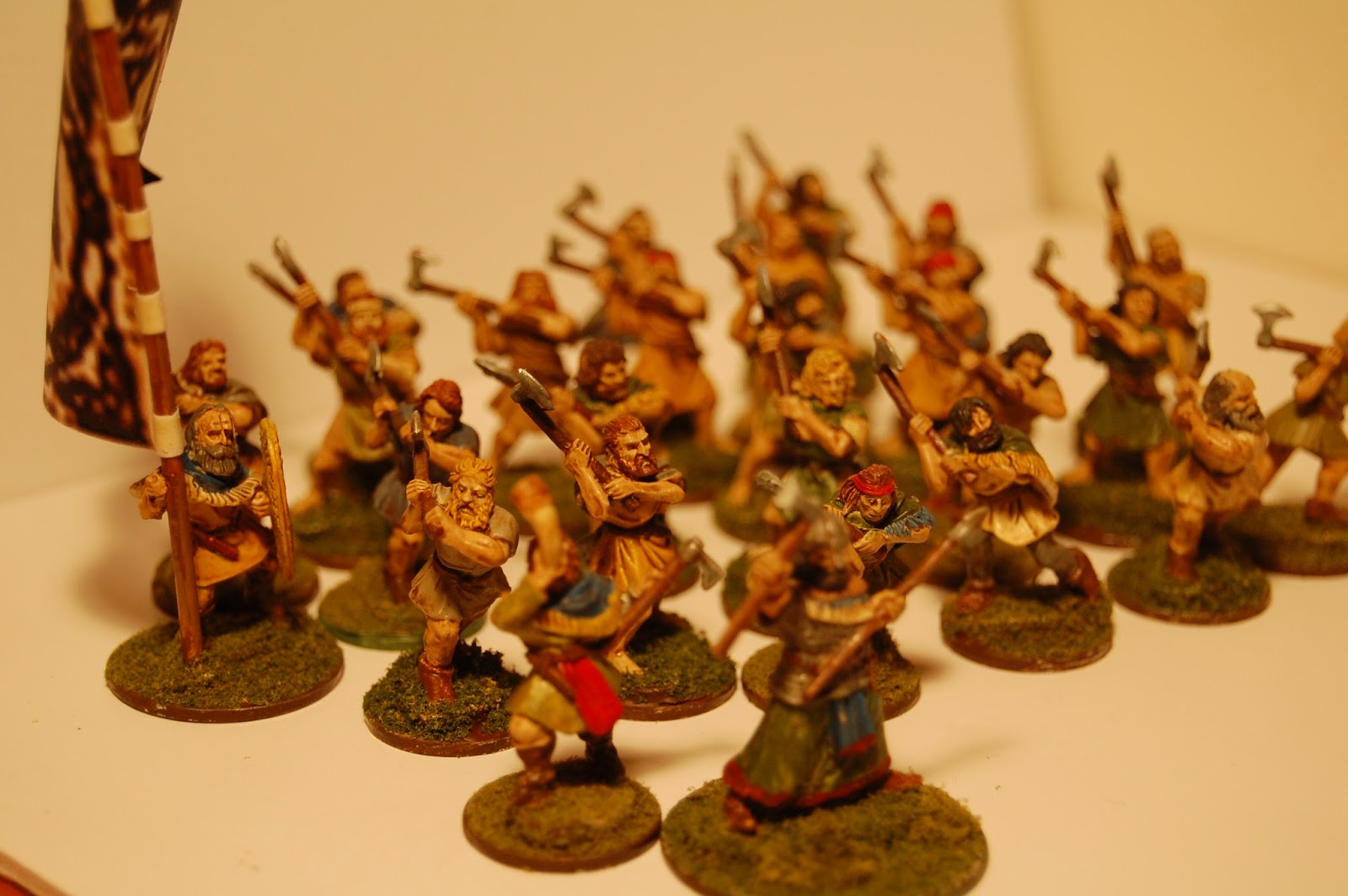 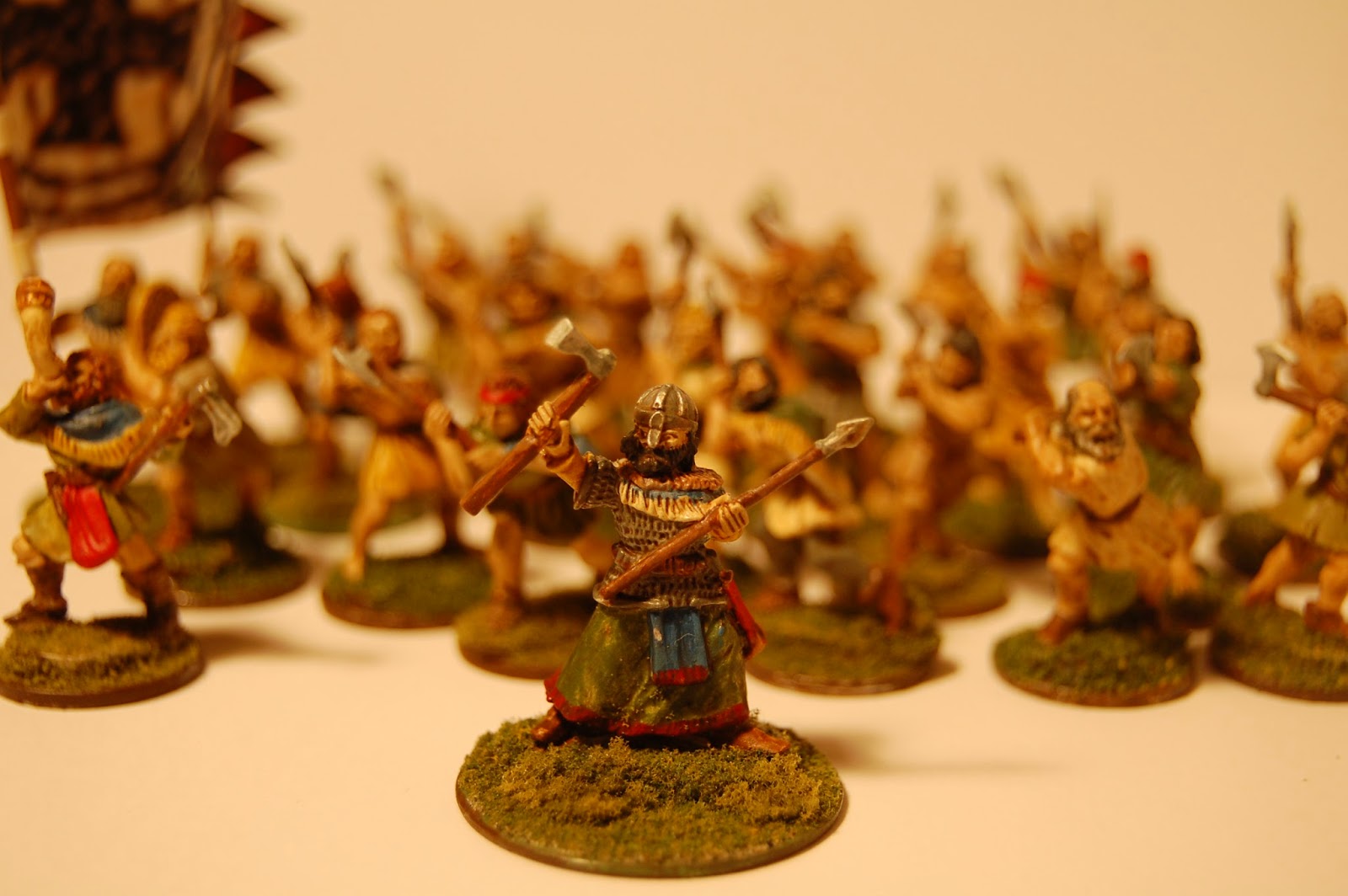 For SAGA I have not actually used these fellows much – I don't have the Irish supplemental information (yet) and would probably need some other figures to round out a warband. I have used small groups of them as Welsh hearthguard on occasion, and I use the warlord as a Welsh warlord all the time. I do anticipate fielding them as medium infantry in a non-skirmish big battle ruleset sometime soon, however.

Posted by Portland Little Wars at 6:50 AM No comments: Links to this post 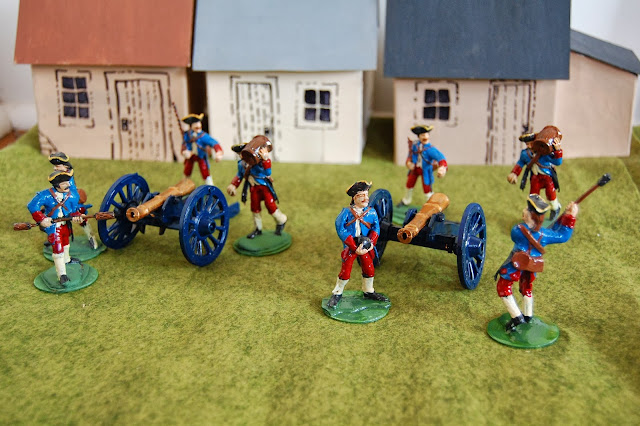 BMC figures. The feller hefting a cannonball is a modified figure. 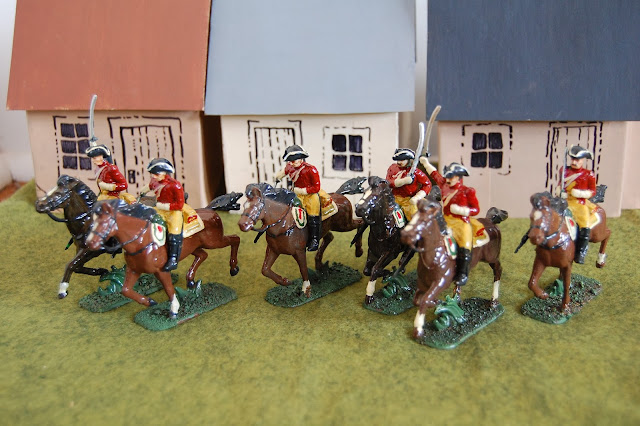 The 10th Dragoons (established 1715, veterans of the '45) were commanded by Colonel John Mordaunt, the MP for Cockermouth and proud owner of the coach of Bonnie Price Charlie, which was presented to him as a gift by the Duke of Cumberland after the British victory over the highlanders at the battle of Culloden.

These figures are my first conversions of HaT Industries Napoleonic French dragoons into Seven Years War period cavalry.  These HaT figuers have decidedly smaller heads than the many BMC/Americana infantry whom have received millliput-sculpted tricornes to replace other headgear, so the modifications by me are a bit inconsistent.  After painting the figures have been dipped in polyurethane to protect and to give them a shiny metallic look.  If I'd been more thoughtful, I would have trimmed off the epaulets on two of the figs and also trimmed off the holstered carbine on their right legs. 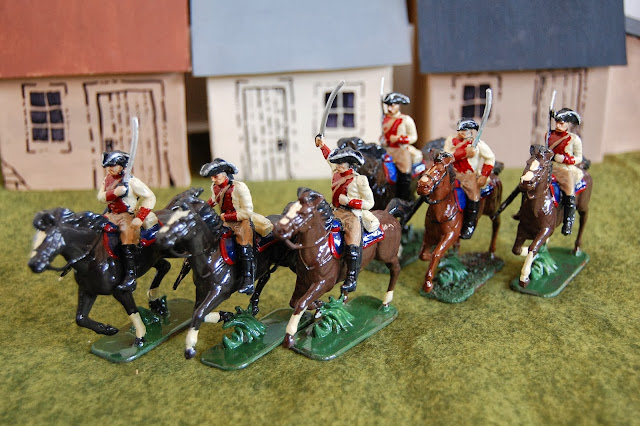 This heavy calvary regiment was first established in 1665, disbanded 1668, reestablished 1671 under the comte Marcillac.  The comte de Vogüe purchased the regiment in 1734 but then sold it in 1744.  The regiment finally returned to ownership of the Vogüe house in 1759, when Charles François Eléazard, marquis de Vogüé, purchased it for his son Cerice François Melchior de Vogüé (and company within said regiment for his second son Florimont).  The regiment fought at Bergen on April 19, 1758 and was badly mauled at Minden on August 1, with Cerice François being seriously wounded and captured by the Allies.

Like my other Seven Years War cavalry this unit is made of converted HaT Industrie Napoleonic French dragoon figures.  The dragoon helmets have been cut off and replaced with tricornes fashioned from milliput.  Wish I had thought to also shave off the carbine hip holsters and some random epaulets.  The tricornes are okay but look a little too big if you look at them too closely - its tricky to get the right look as the HaT figures have rather small heads. 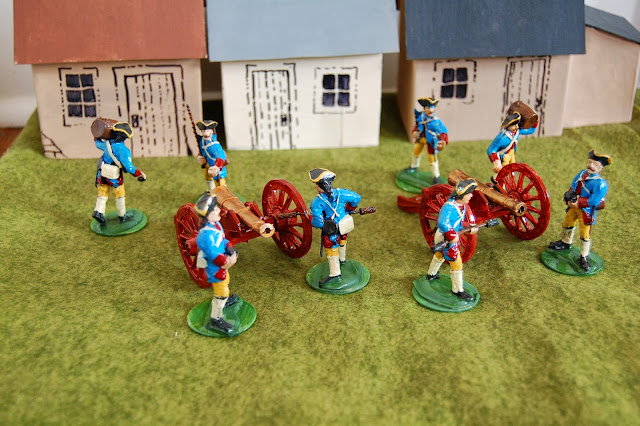 As with the French artillery, BMC figures and the ones lifting shot are a modified figures - arms and cannonballs sculpted from milliput. 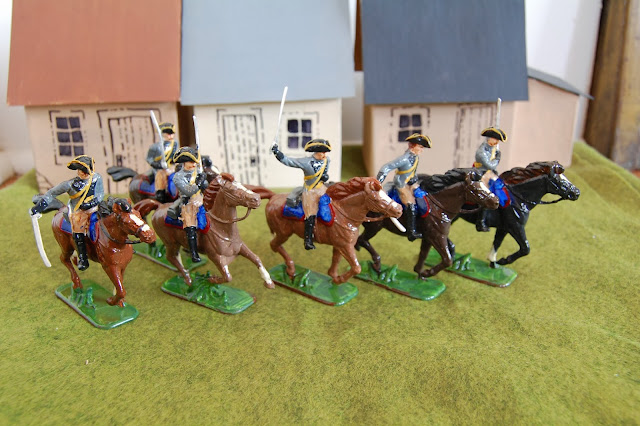 Second generation of modified HaT Industrie Napoleonic cavalry.  This time I trimmed off the holtered carbines and the random epaulets. I was also less shy about slightly oversized tricornes.  Mainly I remember being overjoyed to find a French cavalry unit that didn't wear white or red! 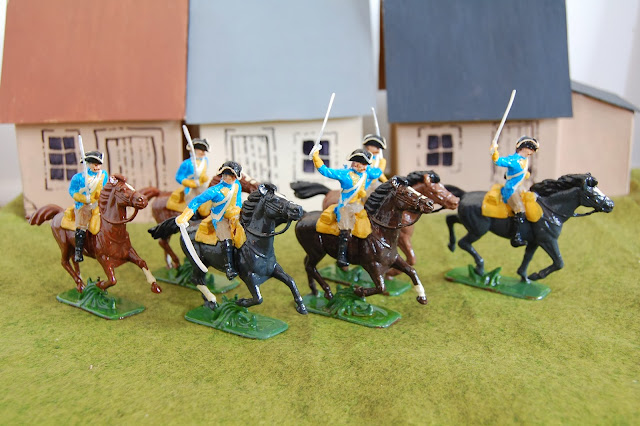 The other half of the second generation of HaT Napoleonic cavalry conversions. More of the same. Again, happy to find a unit wearing color I hadn't used yet. 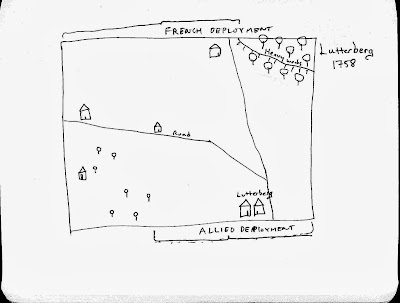 ﻿
Simplified deployment map for a Lutterberg scenario for All the Kings Men (unplayed).
Posted by Portland Little Wars at 8:49 PM No comments: Links to this post

Here are 24 "Welsh Spearmen" (set number DA-21) in 25mm scale by Old Glory Miniatures.  The bag comes with 30 figures in 5 poses with head variants. I only painted 24 because the last six were a shirtless pose that I didn't care for.  Some of the heads have poor detail (or are a completely undetailed flat smush) on one side of the face. I did my best to just paint around these – they are in the minority and not too noticeable when ranked up. 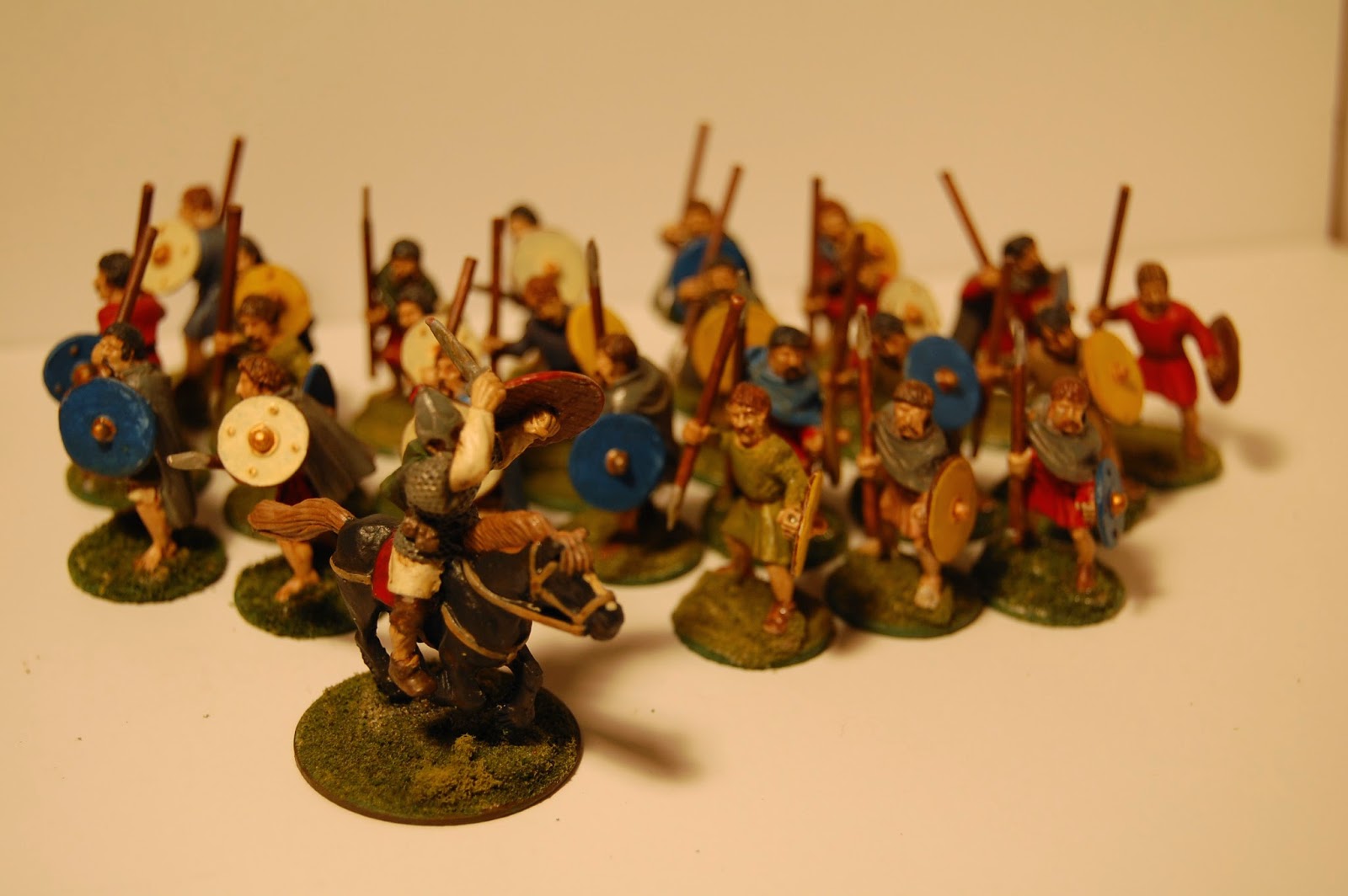 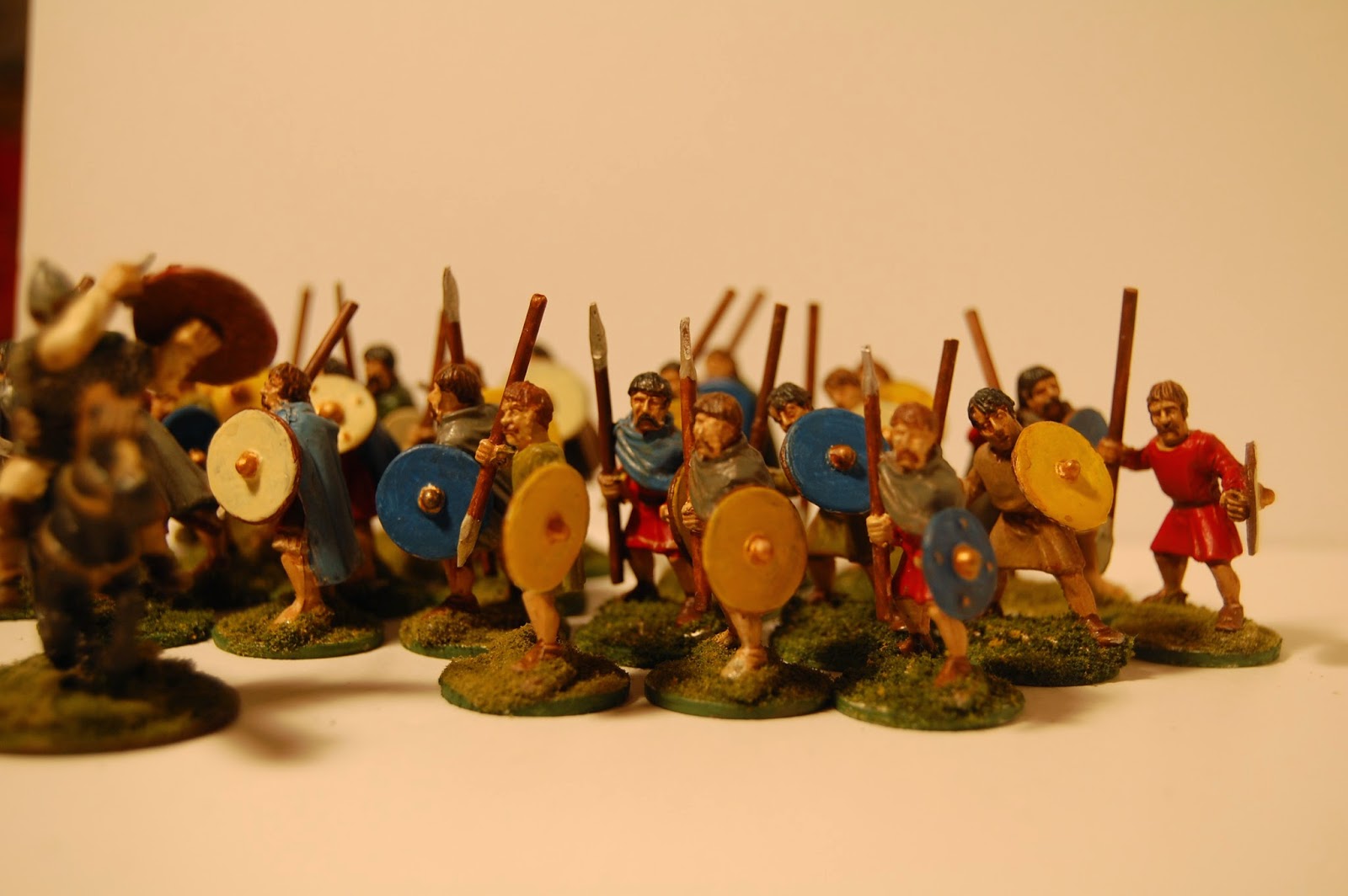 The color scheme features a lot of red shirts. This is because I found a reference [1] stating that Welsh "warriors were dressed in a linen shirt (often red) and linen drawers; they covered these with a woolen cloak hanging to their knees".  This is probably referring to a later period than the dark ages, but it's good enough for me!  The same source notes that "a circular shield was carried by the foot soldiers, decorated white, yellow, silver, or blue." [2] I didn't like the idea of silver shields, so I stuck to white, yellow, and blue. 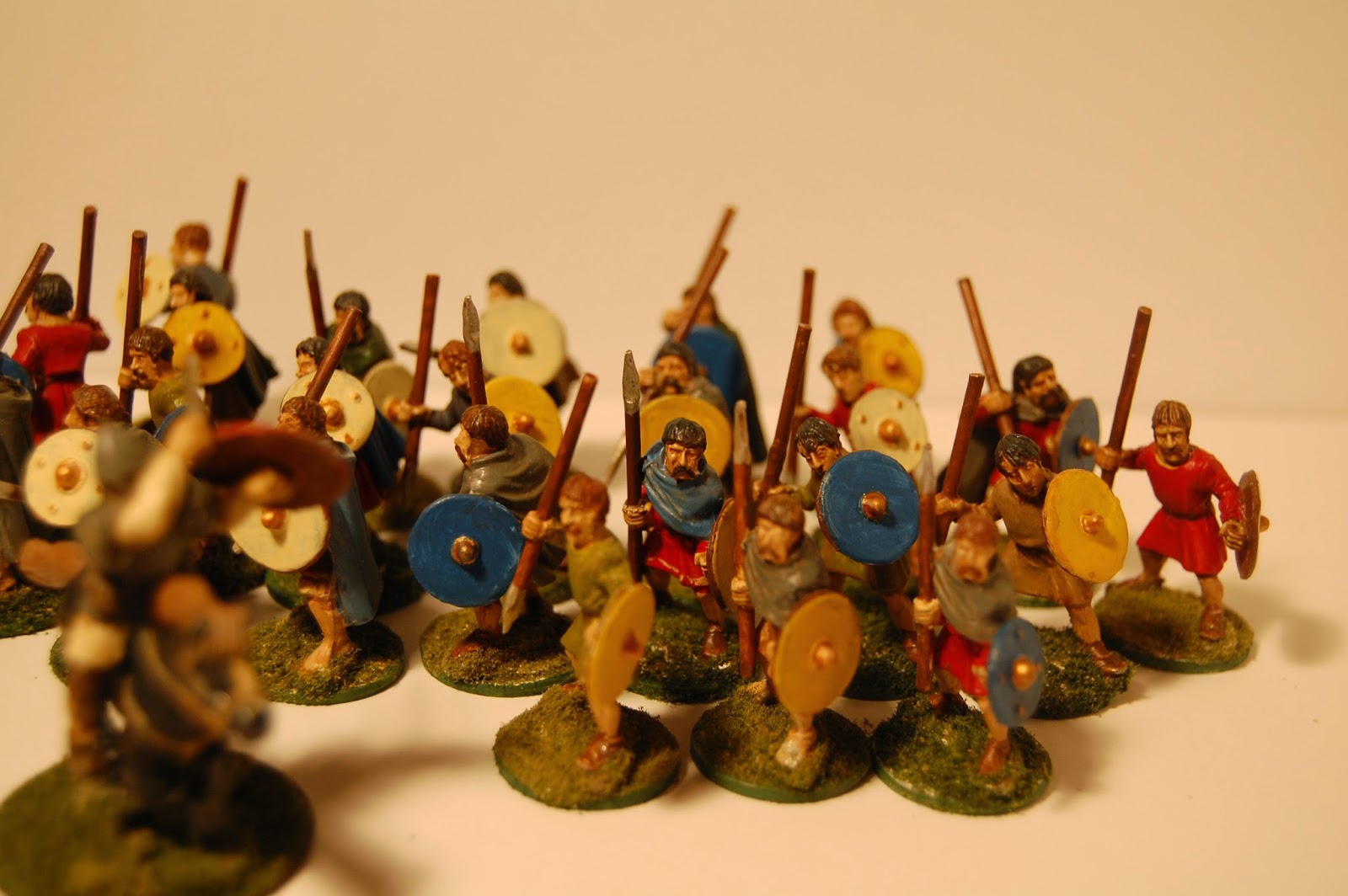 The spears are styrene rod cut and carved by me to look spears. Some of the figures had poses where the hand is too close to the body and makes getting a spear in pace rather difficult. I would rather more of the poses had an overhand arm pose to hold the spear to give them more of a javelin-using skirmish look. As is they rank up rather like a phalanx. 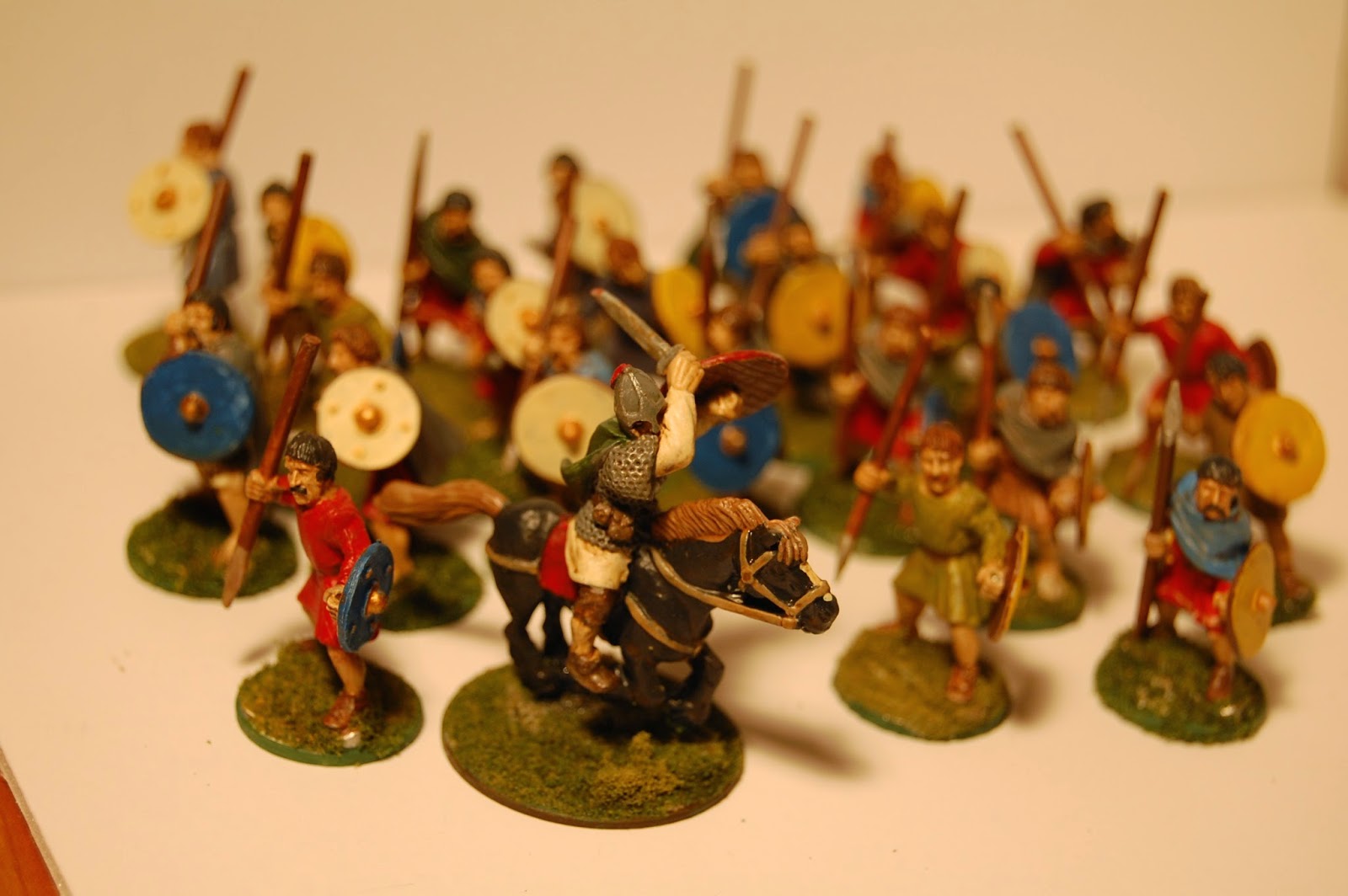 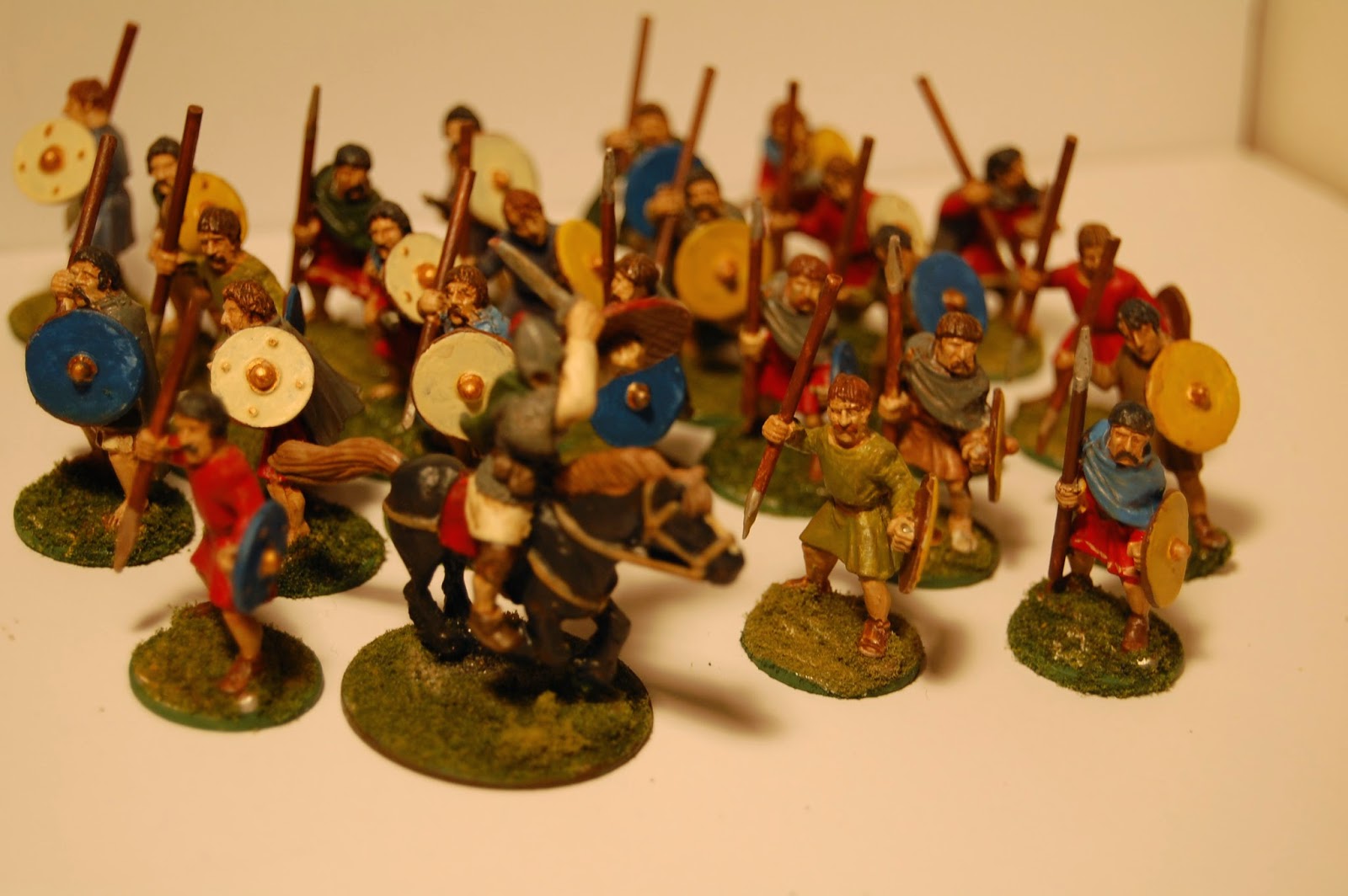 The mounted warlord is by Gripping Beast. I have managed to photograph him in just the right way that shows off the mistake I made painting the mane that I keep neglecting to fix over and over again. 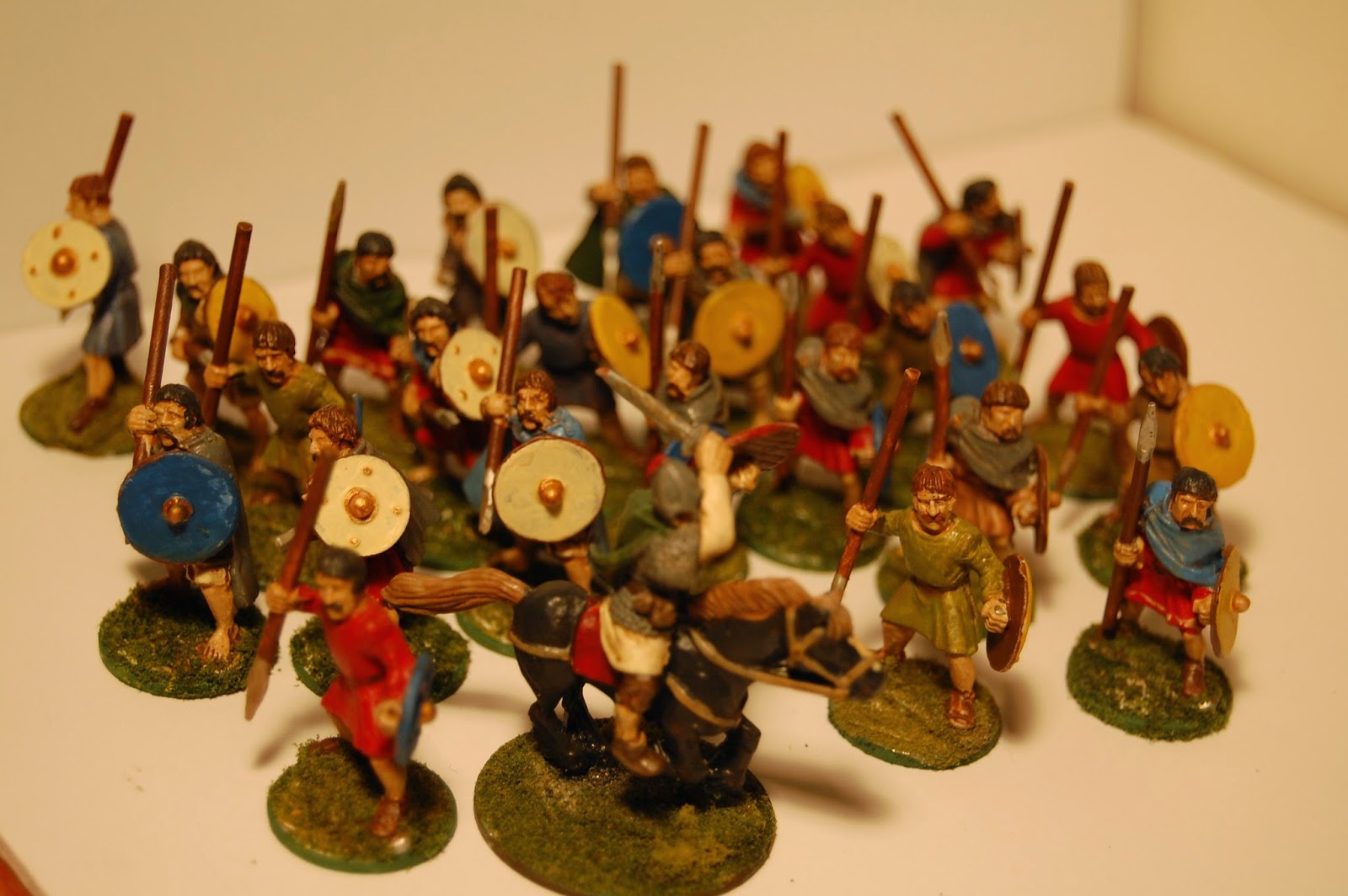