Last summer, my attention was drawn to the Turnip28 project, which primarily involves hacking together and modifying Napoleonic miniatures to be wearing high medieval period helmets, plus a hearty helping of a mutated turnips which have over grown everything and lend everything a dark sci-fi fantasy tone. Because I had dozens of 54mm plastic Napoleonic figures in the basement, which I knew I would never use in a game and also knew had little resale value, I set about converting a few, then a lot, of those figures to helm-wearing, gaiter-sporting post-apocalyptic Napoleonic soldiers.  At the time there were also some very beta-version rules available (just a page or two, as I recall), but they were a little two rough around the edges for me to use at the time, so the Turnip54 army proceeded to sit on top my miniatures cabinet for about a year.
Fast forward to a month or two ago, and Version 15a of the drafted rules comes out (further revisions are certain to follow, so I'll try to avoid getting into details too much), and in the intervening year they had evolved into a ruleset quite unlike anything else I have ever read or played.  The Version 15a rules has just one scenario, with both sides trying to capture the majority of 5 objective markers.  For this first try-out game, I did not have objective markers yet, and had to quickly make some terrain, but just  happy to get the figures on the table and slug away at each other for 4 turns to get a feel for things.

The length of the game is only 4 turns, and four "deadly terrain" (if a figure ends up in a deadly terrain piece, roll a die: on a 1 the figure is "brutally murdered" by the terrain and removed) pieces do a lot to clog up the available open space.

The rules follow a basic underlying premise: all of these troops are pathetic.  These are scavengers not soldiers, so they are lousy shots, lousy in a hand-to-hand fight, and huge cowards. Needing a six to do anything is the norm, and occasionally you even need a "7+" (you need to roll a 6, then roll again and score a 4 5 or 6).
To this pathetic-ness, add the following interesting and clever mechanics:
All of this adds up to a game with remarkable thematic consistency - troops are pathetic, but you also lose models at a brutal pace.  There are many opportunities to lose figures to circumstances beyond your control (falling victim to the environment, being eaten by your fellows) but none of them feel unfair, and I never had that dreaded "roll dice, stuff happens" lack-of-control feeling during the game. 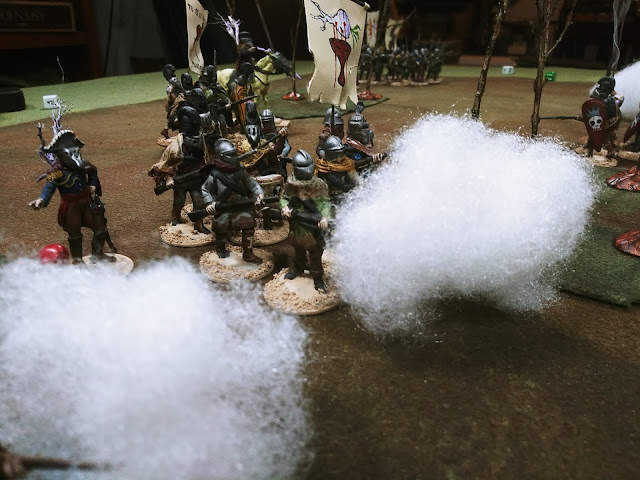 So, somehow, you still feel remarkably in control of the game despite all the thematic stuff going on and removing your figures randomly.
There's still good tactical opacity, I guess - Chaff are hard to target, so have them shoot at a unit and force them to counter-fire, and then charge that unit with your Brutes, because the target unit can't offer closing fire because they already discharged their weapons at the Chaff (there's that pathetic-ness again). 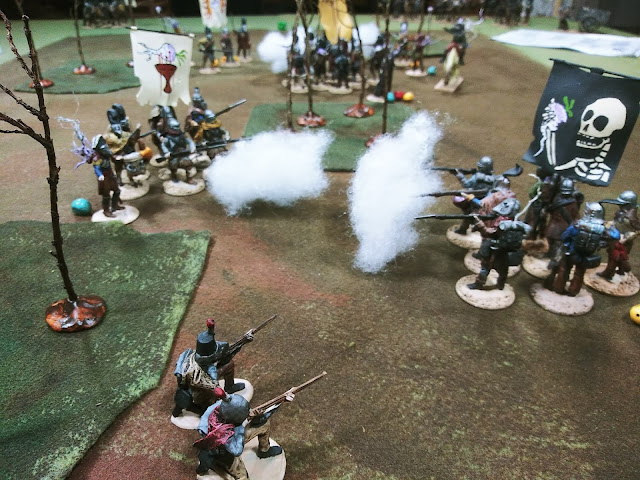 In our try-out game, figures died in great numbers. We forgot to use certain special rules for Fodder and Brutes.  The rules are short and quite succinct, so you don't have flip through pages and pages of photos and long paragraphs to find what you are looking for. 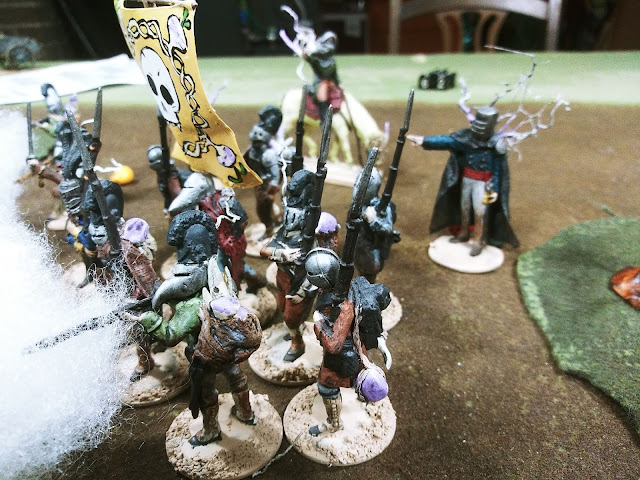 The rules are fun (and funny), and well worth the effort of converting figures (in whatever scale).

These rules are based on the Portable Pike & Shot Wargame rules