Book Notes: Barbarians Within the Gates of Roman: A Study of Roman Military Policy and the Barbarians, 375-425 AD (by Thomas S. Burns) 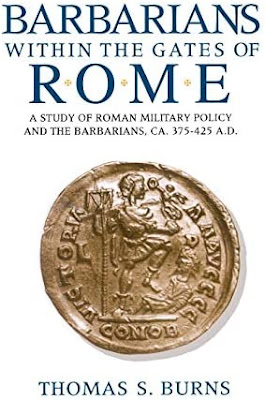 This is another book I read because it was recommended (or the author was recommended) in the bibliography presented in Guy Hasall's Worlds of Arthur.

Burns examines in considerable depth and detail Roman military policy after the defeat at Adrianople in 378 CE.  As with Goffart, there is considerable discussion of the nature of the Empire's frontier, and this is the first work where I began to really think of the "invading barbarian armies" as more like refugees seeking to enter the Empire, wherein while the short-term intent of crossing the frontier and "invading" might be simply to scoop up undefended food stores, the long term hope was probably to be "settled" into the Empire either by being absorbed into the military (a choice assignment - army forts and camps are still supplied regular grain from Egypt and Africa) or the accommodation process described by Goffart.

In the post-Adrianople context, Burns shows how quickly the Empire was able to contain the Gothic army despite the destruction of a large Roman empire and death of the Emperor Valentinian.  The surviving emperor Valens and then Theodosius resolved the Gothic crisis by accommodation means. Burns then moves on to the situation thereafter, where "armies" of Goths have been brought into the Empire and are part of its military apparatus, but in a very secondary status as auxiliaries. There is an examination of the internal threat powerful Roman generals have come to assume in the empire - Stilicho, named guardian of Emperor Honorius by the dying Theodosius, leans heavily into recruitment of "barbarian" troops from the frontier zone.

The Goth Alaric, dismissed from Roman auxiliary service, essentially becomes an outlaw general and an army of similar barbarian discontents rally around him. The Empire fails to confront this army, both because multiple competing internal usurper and rebel generals, and because Alaric's army is a useful counter to these threats.  Alaric jockeys for a "true" generalship and incorporation of his troops into the official Roman military system (and its regular meals), sacking Rome and creating a puppet usurper Emperor of his own. The Emperor Honorius freezes grain shipments from Africa to Italy and starves Rome and its occupier.  The Western Empire remains in flux with multiple usurpers and outlaw generals in competition and cooperation.  Finally, the Goth general Wallia and his people/army is settled in Aquitaine in 418 by the Emperor Constantius, to act as a buffer against the Vandals in Spain and as a reserve force in Gaul.  Most notably, however, for the first time ever, the Emperor acknowledge Wallia as King of the Goths inside the Empire.

Burns' point is that the process from Adrianople to Wallia was still process and one where Roman leadership was making the choices, so that "as long as Roman generals possessed forces to balance the barbarian auxiliaries, they called the tune."  That balancing involved the use of other barbarian auxiliaries, alliances with usurpers, or the arrival of eastern Imperial troops.  However, as seen in Goffart, the skeletal structure of the early medieval/feudal period has been put in place - where once there were Roman provinces, there are now "kingdoms" which will ultimately outlive the Empire of which they are supposed to be a piece of.

A guide for generating forces, terrain, and deployment for battle games in the period 1871-1914 ("the Belle Epoque" or "Beautiful Age") using the Portable Wargame rules or another set of your choosing.

These rules are based on the Portable Pike & Shot Wargame rules