Last weekend was Enfilade at the Olympia Red Lion. I hitched a ride with Gabe again and we made great time, arriving a little after 11:00 a.m.  Luckily the hall was already open and I was also able to check in early, so by noon my Fornovo game was already set up and my suitcase was unpacked, leaving me two hours to just mill around and wait for the players to arrive.  I ran the Fornovo game consecutively in Periods A and B on Friday. 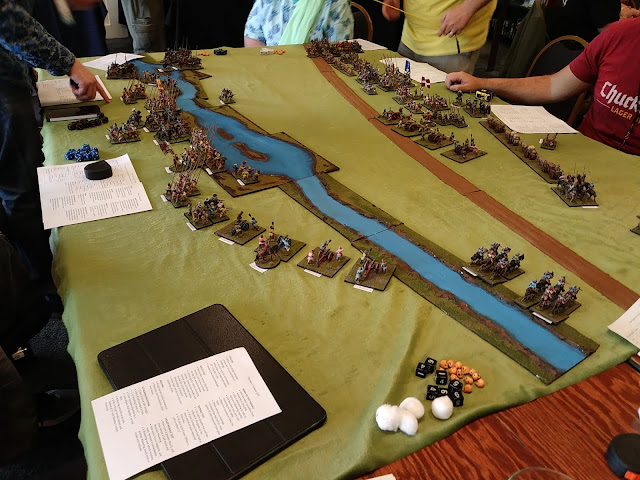 The first game was an absolute blast!  I was blessed with two very players on the Italian side who were well versed and experienced Dragon Rampant players who voluntarily took up coaching the other players around them and explaining basic mechanics. This essentially caused there to be three GMs instead of just me and made the game move very quickly.  The game itself was very competitive for the entire 3.5 hours it took to play. The artillery played exactly as I wanted it to (some early successes followed by irrelevance thereout) and while the Italian light cavalry did not get wiped out as it did in playtests it did not deliver a killing stroke on the escaping French baggage either.  In the center and the French right/Italian left there was lots of heavy cavalry charges and counter-charges and infantry melee.  Each side had 100 points worth of troops and the first to fall to 50 or less was the loser. Over 3 hours in and the both sides were at about 54 and 56 (or so) and suddenly there was a lot of conferencing by each side about how to get the last few points without risking losing too many in exchange.  The dramatic finish was provided by a lateral shot by a unit of Italian arquebusiers upon the royal body of Charles VIII (King of France) himself!  Also, Chris from Cigar Box Battles played in this game and generously gifted me TWO of his great play mats! Thanks Chris! 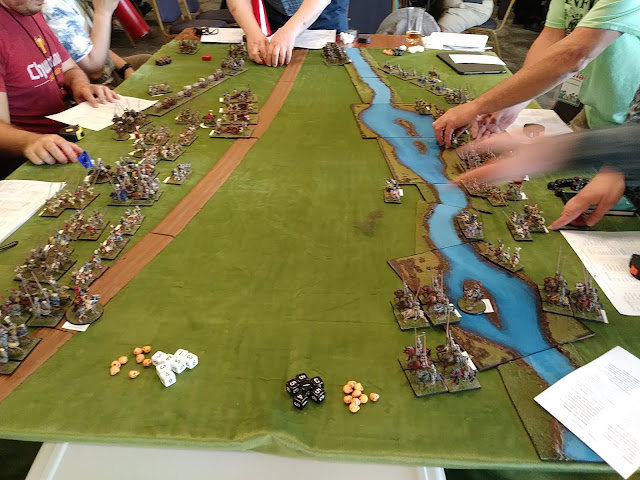 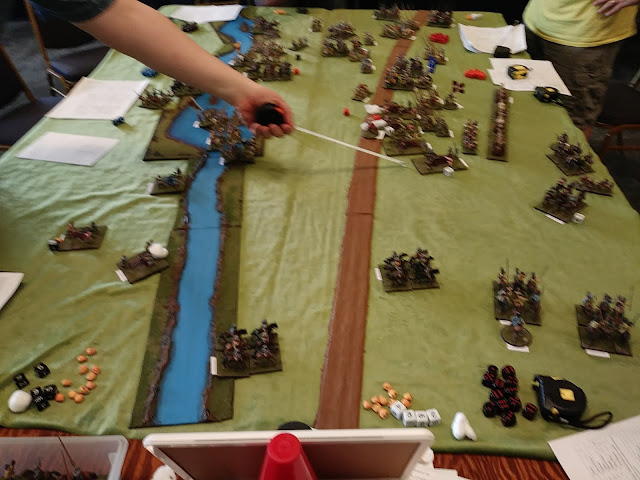 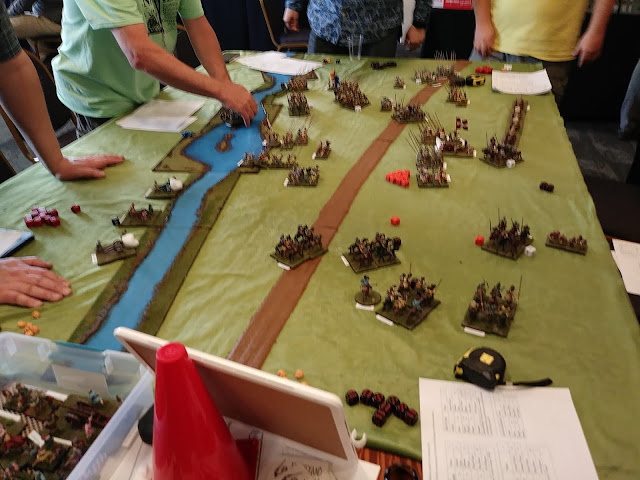 The second game was not quite as dramatic, with the Italians winning by an almost 20 point margin (!), although this was largely accomplished by the Italians managing to withdraw almost 20 points worth of units out of the melee zone and back towards their own board edge – the Italians also succeeded in destroying 3 of the 4 French guns.  The gaming hall seemed impossibly loud Friday night which made running this game a challenge – I'm guessing the loudness was due to most the attendees having finally arrived and everyone's voices not being raw and hoarse yet!
BATTLE OF TEWKESBURY 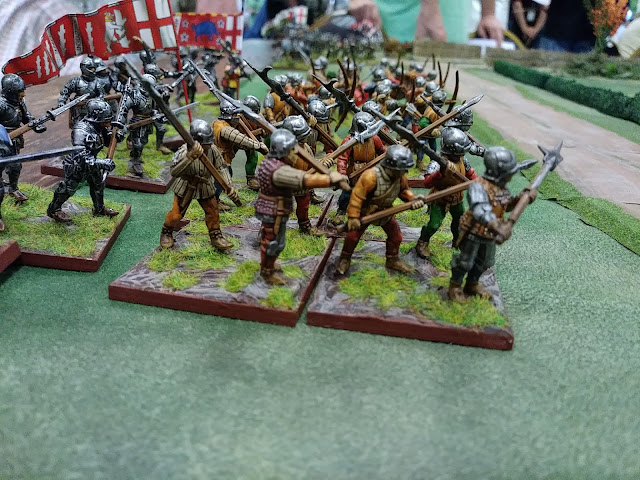 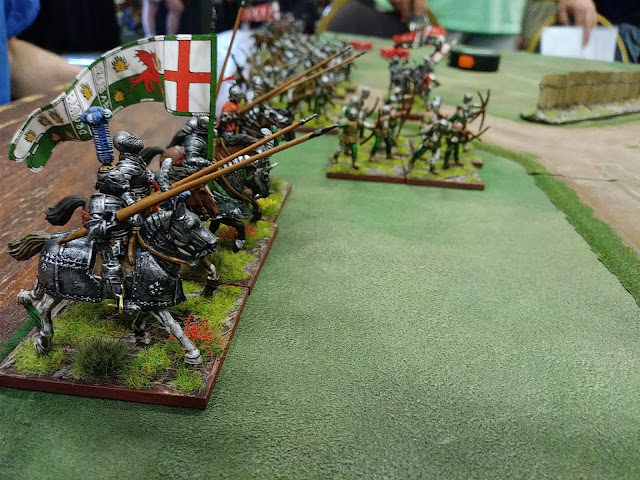 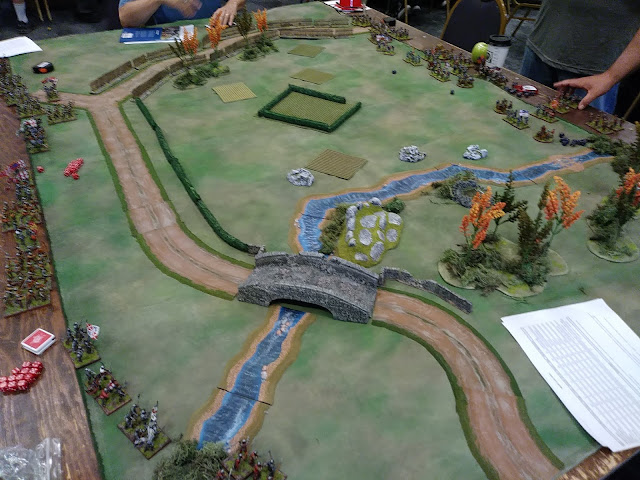 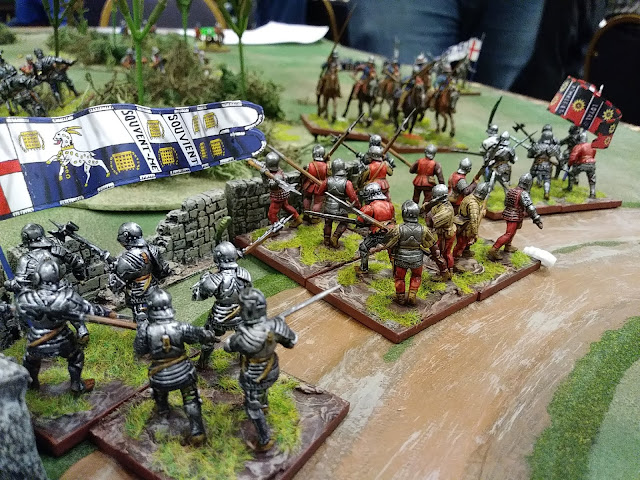 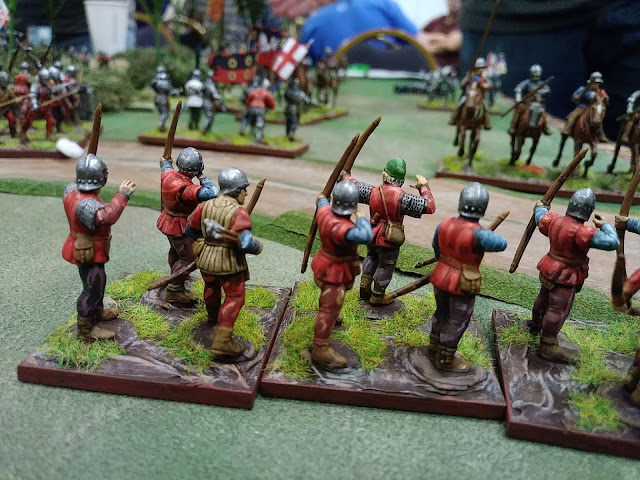 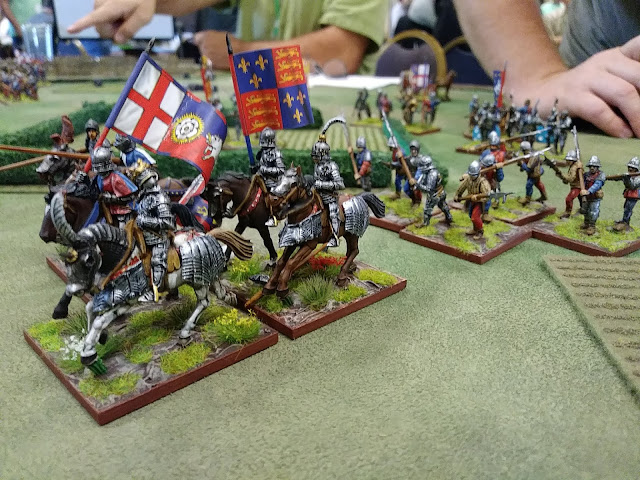 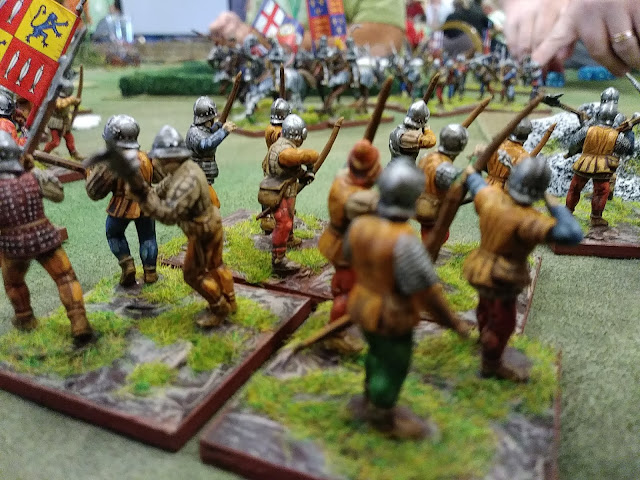 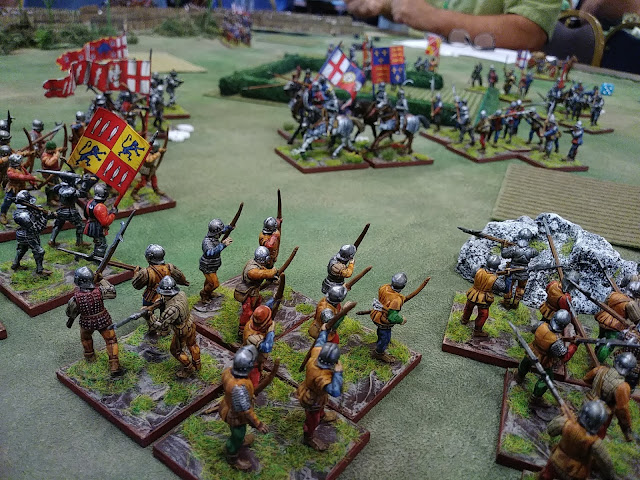 I was able to move all five of my units from their starting position, over a bridge, and into deployment against the far right edge of the board, from which I destroyed to flanking mounted yeoman Yorkist units and some handgunners.  THEN I moved all the same units back over the bridge and into the center fray where I made a good show of making it a close game.  For me, lots of fun since I felt moving a lot of units even if not victorious.


BATTLE OF THE FORD OF THE BISCUITS

The next game was Dave's Battle of the Ford of Biscuits game set in 16th century Ireland using Pikeman's Lament.  I took one look at the board and saw a company of saffron-clad Irish lads consisting of some heavily-armored gallowglass types (forlorn hope), pikes, and four units of commanded shot.  In Pikeman's Lament units within 12" of their officer get a +1 on their activation rolls, so again, all my units had a 5+ to move which is effectively a 4+, so I had my entire company beeline along the long edge of the board toward the aforementioned ford and English baggage train trying to cross it. 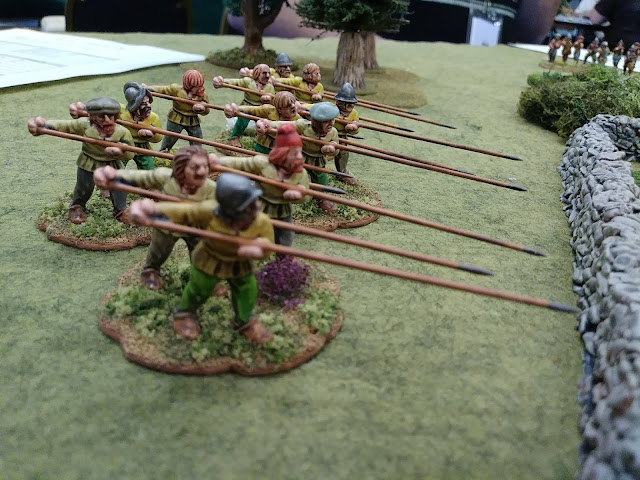 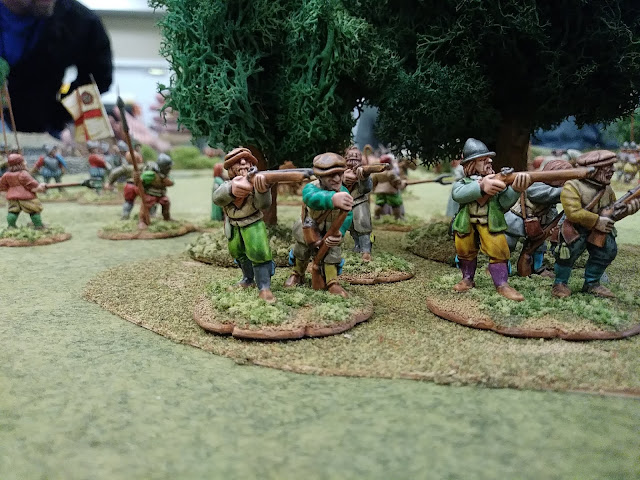 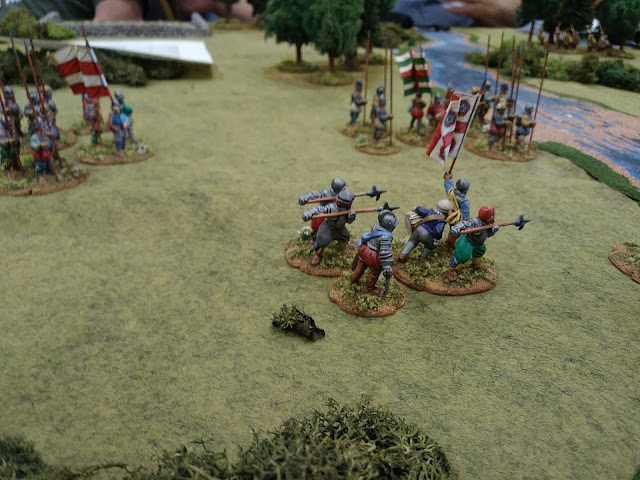 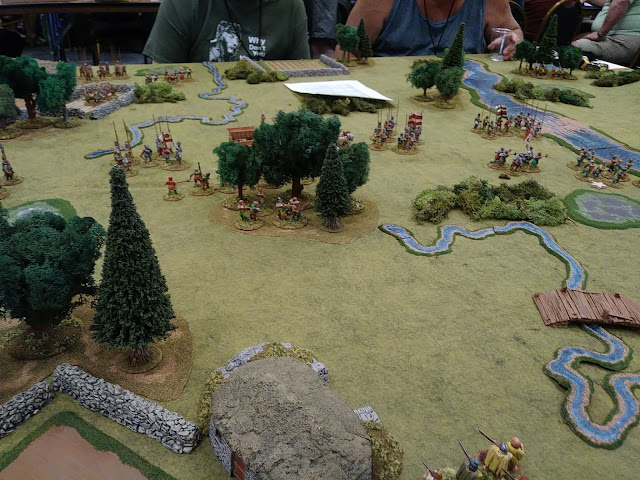 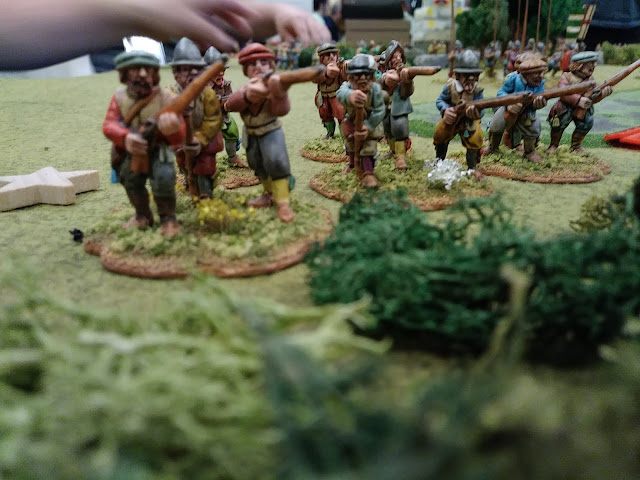 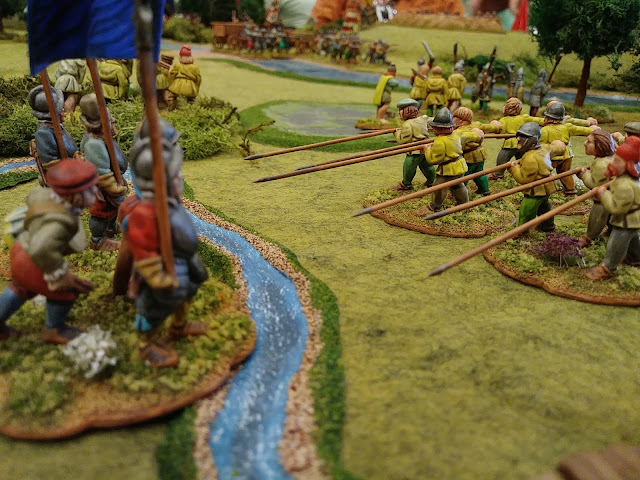 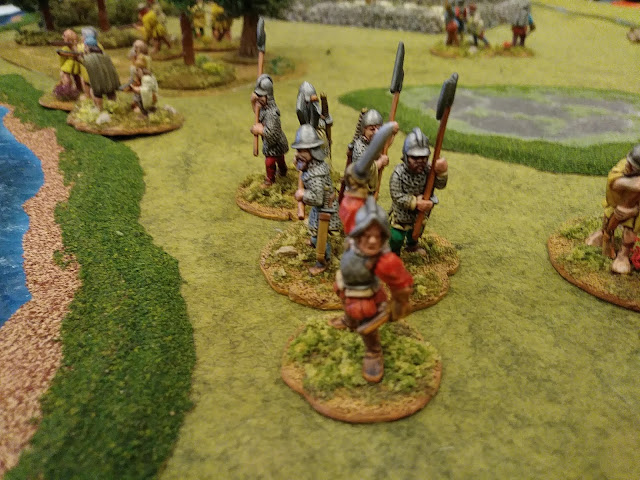 I had some good dice and had two rounds of successful skirmish actions which destroyed a unit of English formed shot in a wooded terrain area, and also destroyed one of the three wagons.  The Irish won this one and I had a lot of fun because at the very least I was moving my units around.

The final game on Saturday was Nick's "Jackson's Night Raid" which was an minor action prior to the Battle of New Orleans during the War of 1812.  Nick was using The Men Who Would be Kings and playing with 54mm figures!  I played on the side of the British. 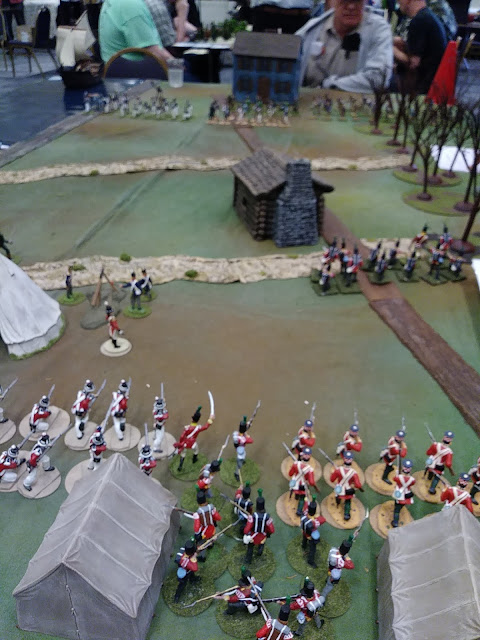 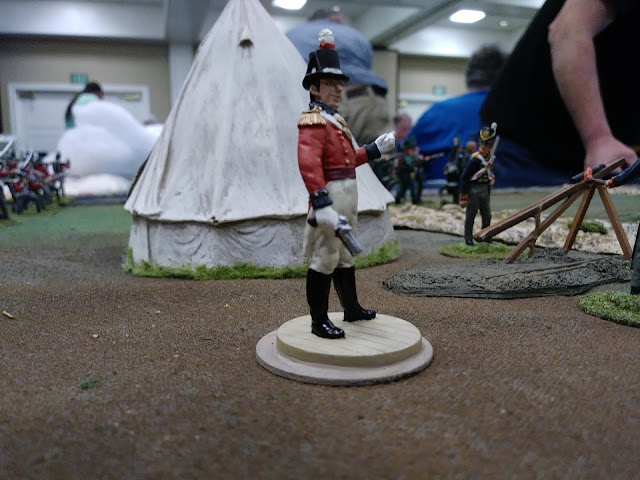 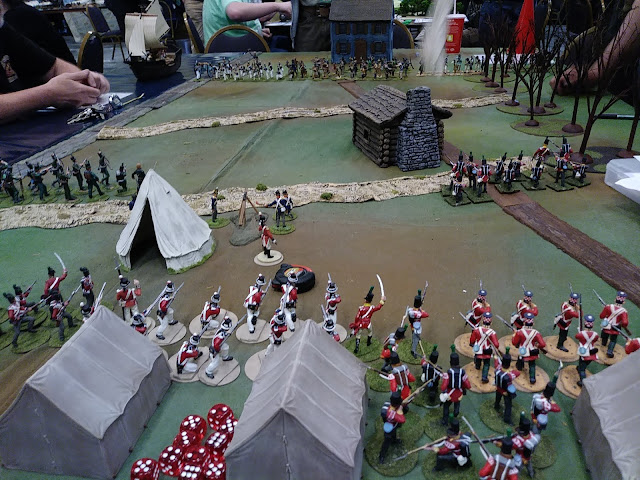 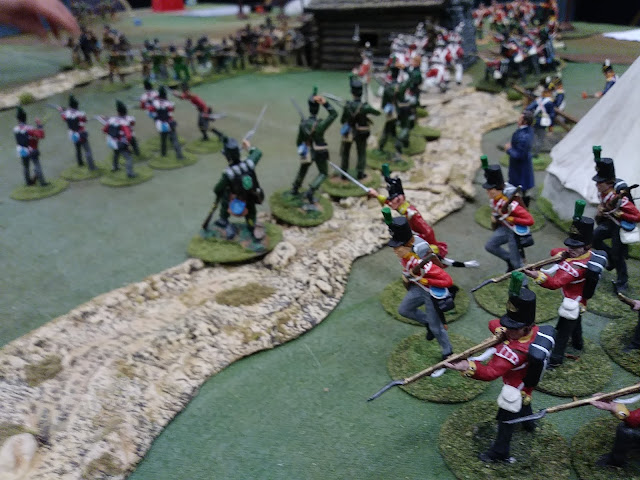 The Americans were advancing under cover of darkness and the two British pickets had to roll a double of any number on 2d6 each turn to "detect" the approaching raid.  Of course the pickets failed to do this completely until the Americans were right on top of them, at which point Nick just ruled that the British could see the Americans. However this meant the bulk of the British were still in their tents so they had to get into position while taking whithering fire from American riflemen. After a few hours of play the British players agreed to call it for the Americans.


Sunday we hung around after the business meeting and I took a seat at Kevin and Dave's big Borodino game using Shako II.  They were a little late finishing setting up and it took forever for the French to move so mostly I sat around and took and received a few cannon shots before having to unfortunately bow out so I could get on the road. 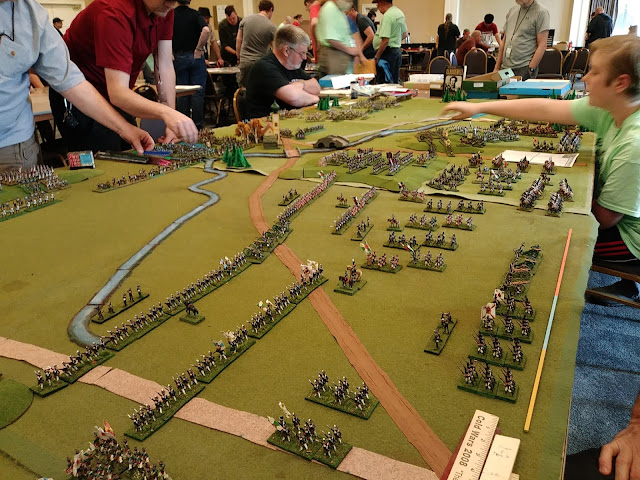 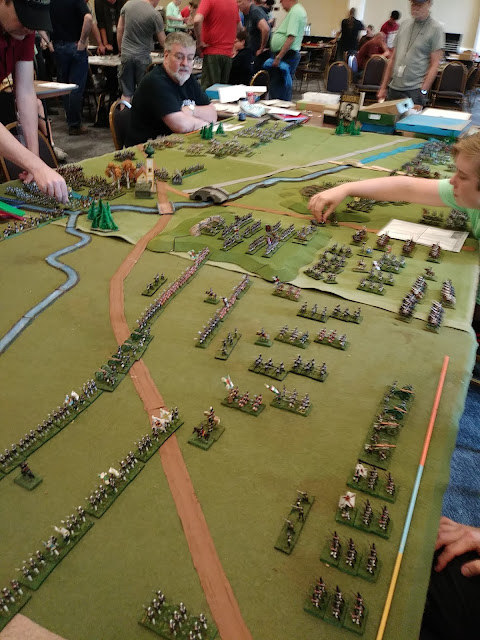 I also successfully sold everything I brought to the trading post, although I didn't find anything to buy.


Enfilade was really really enjoyable this year! I hit one goal which was to try and play only in games run by people not from Portland (the exception being Sunday's game).  I didn't mean for the weekend to be a Dan Mersey-rule-fest but being familiar with the rules you're playing never hurts!  I also got to meet and talk to a lot of non-Portland gamers and also met a few Portland-area gamers I had not known before, whom I hope to be in touch with!
Posted by Portland Little Wars at 12:45 PM

Email ThisBlogThis!Share to TwitterShare to FacebookShare to Pinterest
Labels: Enfilade, Italian Wars, Lion Rampant, Pikeman's Lament, The Men Who Would Be Kings, wargame